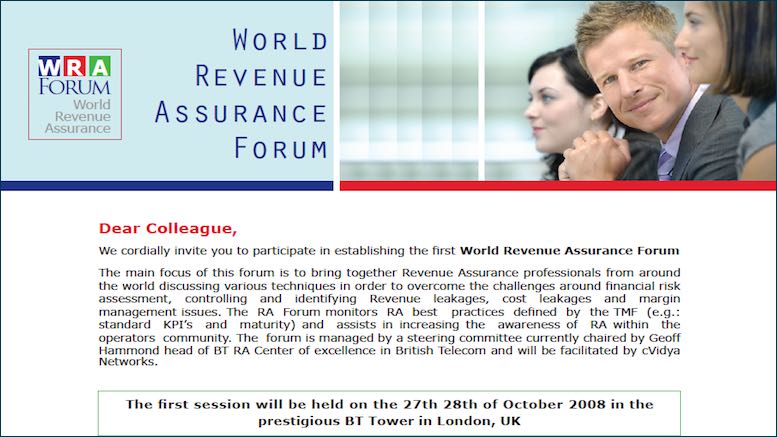 People sometimes ask me what this website has achieved. It certainly has not made me rich. I could waffle about collaboration and raising standards and other high-minded goals, but the first answer that comes to mind is very straightforward, and a little disappointing: this website killed the World Revenue Assurance Forum. That answer is disappointing because of the conversation that immediately follows…

Honest Joe: The World Revenue Assurance What? I’ve never heard of it.

Honest Joe: What was it?

Eric: It was a bogus sales operation for a software company called cVidya, who manipulated a lone idiot BT manager into thinking he was the world’s leading practitioner of revenue assurance just because he had a job title they could exploit. In reality cVidya were using this jackass to lever BT’s brand and to obtain a swanky meeting room at the top of the iconic BT Tower. Their plan was to hold a meeting that would have included BT, any other telcos they could persuade to come along, and cVidya, but none of cVidya’s competitors. They mailed invitations to lots of RA managers. cVidya were going to pay for everything. Decide for yourself what their motivation was.

Honest Joe: Who was the idiot manager in BT?

Eric: It was a long time ago. You’ve never heard of him. He was called Hammond, or something like that. He described himself as the Chairman of the World Revenue Assurance Forum even though the only other members were employees of cVidya, and hence technically barred from joining an ‘operator-only’ forum. In my experience, he was a lightweight who had switched from being a general-purpose project manager to running a shoddy backward RA team compared to other British telcos at that time. Consequently, the guy from BT didn’t like to answer questions about how he became Chairman of an international body that suddenly appeared from nowhere and had no telco members but him.

Honest Joe: So why haven’t I heard of it?

Honest Joe: So you murdered the World RA Forum in its crib?

Eric: I suppose so.

Honest Joe: And what about this Chairman, this idiot in BT who was supposed to be running the forum?

Eric: I think the BT manager went on sick leave and nobody in the RA profession has heard of him since. He just seemed to conveniently disappear. It’s like he thought he was the best RA manager in the world but then his career just stopped.

Honest Joe: Did you murder him too?

Eric: No, I did not murder him. I would have liked to have strangled him, but never had the opportunity.

So this website’s greatest achievement was telling people the truth about the World Revenue Assurance Forum, and the result was to kill that bogus institution so rapidly that hardly anyone remembers it. But I can think of somebody who probably does remember. This is what one RA manager wrote about it at the time:

Sorry Eric, I think you have really lost the plot here.

Whether your command of English is so poor or you are so arrogant and ignorant to call a professional by his surname and not his first name makes me wonder if you had ever had a proper job in your whole life. I wonder if you you (sic) were sacked or asked to resign from your previous posts as you claim to have worked for so many.

Having known Geoff hammond (sic) through work for over 25 years, I can assure you that Geoff’s integrity and dedication is 100% and feel that you are distorting facts to fill up your blog. Geoff’s idea is to set up a forum open to all and indeed Geoff ‘ (sic) is not in bed with any company.

You have never spoken to Geoff and his team are currently working with many revenue assurance suppliers from all corners of the globe.

Had I been your employer I would have sacked you (assuming BT hasn’t done so already). Go back under the rock you came from.

That comment was posted to this website 9 years ago, to the day. It’s needless to assert that history has proven this individual wrong, because the erstwhile Chairman of the World RA Forum did not participate in any subsequent industry events. I never received an apology for the libel in this comment either, although I made it clear I could provide many witnesses who would vouch about the occasions I had met Hammond.

These miscreants want everyone to forget about the part they played in creating and supporting a bogus industry body. And they make it easy to forget because they avoid open discussion. They prefer to control the agenda. After you have learned the full story, it becomes easy to understand why.

Ten of the Best, from Ten Years of Blogging