When I was at high school, people always seemed to be forming societies. First, they would announce that they were going to launch a society. Second, they would take the names of people who wanted to join. Third, they would put up a notice board to let people know what was happening. And fourth, nothing ever got put on the notice board, because from that point on it was all boring hard work and nobody could be bothered.

It was just the same when I went to university. Lots of eager freshers would choose which groups to join in fresher’s week, would turn up for the first meeting, would find it was all boring and hard work, and would never show up again. So when I joined the university Amnesty International society I was a bit fed up when I arrived late for the first meeting and got the job with least appeal on a CV and most work in real life: Stalls Manager. Not President, or Treasurer or Membership Secretary or Vice-President or anything cool like that. Stalls Manager. Stalls Manager. So I had to always turn up every week, regular as clockwork, and set up and pack away the stall in the student union building. I had to lug the table and all the publications from the store cupboard, up the stairs to the foyer, and do the reverse at the end. And I had to persuade anyone walking by, heading for a beer or planning a liaison with someone of the opposite sex, that writing a letter on behalf of some Chilean prisoner of conscience might be a better use of their time. Tough job. But I tell you, it was great. For a start, I actually did something. It was not like I spent my time organizing stuff or planning things or managing things. I was just doing things. Like getting people to write letters. That taught me a lot about how to get things done. For example, it taught me that if you want people to write a letter you need a chair. There were never any chairs in the student union foyer so people would naturally migrate to you if you had a spare chair. Once they came over, getting them to write a letter in exchange for a sit down was relatively easy. And being sat behind the stall every week gave me a fantastic power base as the man who everybody knew was in Amnesty International. So it was easy as pie for me to get elected as President the following year ;)

It is with great humility that I share the news that I am, for the second time in my life, a President. This time I made it easier to get elected by ensuring that I was the only member when the Presidential election took place. Shocking behaviour, I know, but I gather that plenty of other Presidents do the same thing ;) At least I actually met the membership requirements of my society (anyone can join) which is one better than President Rob of “telcos only” GRAPA. “What are you President of?”, I hear you ask (excluding the half dozen existing members, who found out about it by accident). The answer is that I am President of the Facebook Revenue Assurance group. Yup, I set up a revenue assurance group on the social networking site that most recently went over the tipping point. Our mission at the Facebook Revenue Assurance group is to do good stuff for revenue assurance without taking ourselves too seriously. Unlike other Presidents you may have heard of, I promise a seamless transition to full democracy as soon as possible. Everyone will get an equal vote. No President will be allowed to serve more than one year in office. To be eligible to stand for President, there is only condition: you have to do something useful first. What I mean by the word “useful” is something useful to the people in the society, and to revenue assurance in general, not just something useful for yourself. Press releases proclaiming thought leadership, video taped speeches and advertising-spam will hence not count as meeting the “useful” criterion. I launched the society and put up the notice board (although, to be fair, the noticeboard comes as standard with Facebook) so have done my bit. In other words, I have done the interesting bit ;) Now it is time to hand over to someone with fresh ideas (or any ideas, for that matter) so they can do all the hard work involved in running a real society. Anyone wanting a fancy title to put on their CV, but not wanting the hassle of hard work, need not apply. That should thin out the field of contenders. (I just hope we find a contender before power corrupts me and I start writing books that nobody buys but everyone is obliged to own. You know, like “The Wisdom of Chairman Rob” or whatever they call their sacred text over at GRAPA. I gather one of the followers suggested some changes to the sacred GRAPA text the other day and got treated like he crossed out a bit of the Koran.) So please please please help us form a truly democratic society for revenue assurance. (Or not, in a democratic abstention kind of way.) If you want, you can enlist today, do something useful the day after, and become President the following weekend. Do not ask what revenue assurance can do for you… 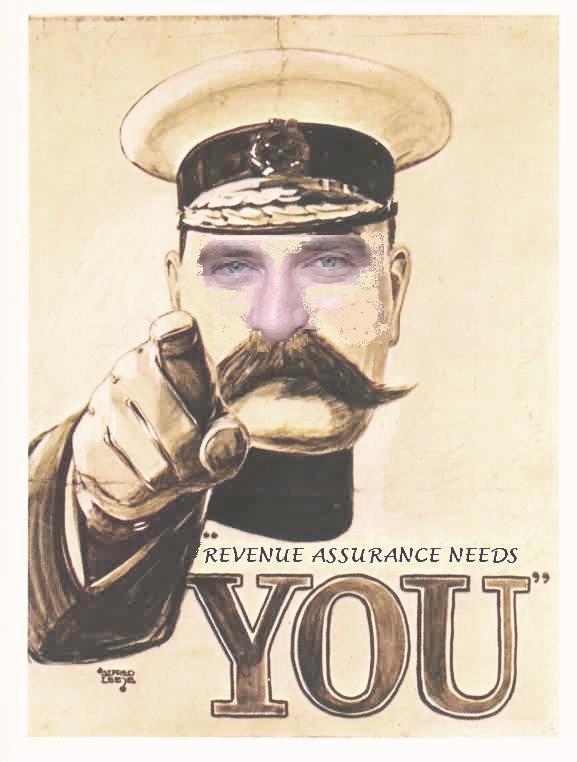 …ask what you can do for the Facebook Revenue Assurance group :)