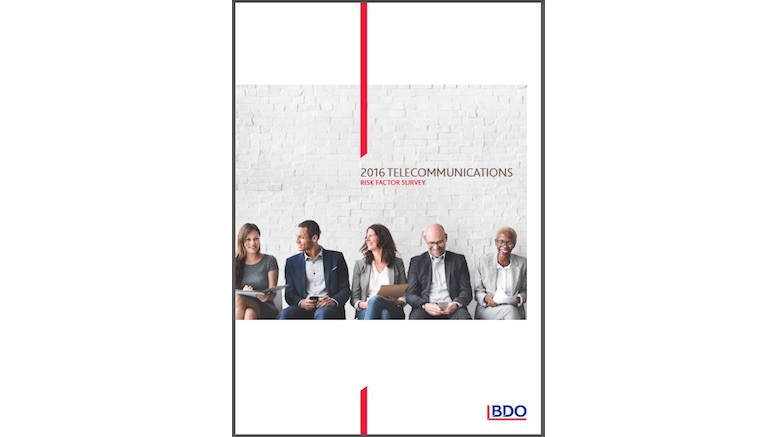 Companies that commission surveys usually want results that justify attention-grabbing headlines. Sometimes the answers given by respondents are just what they hoped for. Other times, they are not. I feel sorry for international accounting firm BDO because their 2016 survey of telecoms risk factors generated the dullest results imaginable. However, BDO soldiered on and tried to make the results sound exciting anyway. Here are three key takeaways, as seen through the eyes of somebody who is not trying to sell lots of consulting services.

1. According to telcos, the biggest risks are totally generic.

Three risks came joint top of the survey for the most riskiest risks of all. And they were all super boring and are relevant to any big business anywhere, at any time. The top three risks were:

***Yawn*** These are all real, serious risks. Big telcos – especially multinational groups – need to manage them. But there is nothing new here, and these risks are not unique to telcos.

My instinct warns me that two things may have gone wrong with this survey. First, there is a danger that accounting business (hint hint) BDO asked the wrong people about telco risks, or they at least failed to talk to a broad enough cross-section of telecoms professionals. People working in a treasury function should rightly worry about things like forex and interest rate variation, but these risks are well understood and competent professionals will deploy mature yet standard tools to mitigate them. If these are the kinds of risks that belong at the top of the executive’s list of concerns then we can all sleep soundly at night. However, these kinds of risks are easier to measure and evaluate than other kinds of risks. And that leads me to the second possible failing of this survey, which is that the greatest threats to shareholder value are not posed by financial market risks that are routinely estimated and reviewed, but by other kinds of risks that nobody considered and nobody put a value to.

Certainly it is hard to reconcile the tedious triumvirate of top risks with BDO’s opening commentary, which reads:

Even greater pressure? Adapting to changing markets? But the top three risks suggest the priorities are the same as they have been decades. And they include interest rate volatility although debt is cheap and central bankers have pursued a policy of stable low rates for years!

2. The sexy risks are in the list, but telcos refuse to find them sexy. Or maybe they just do not understand them.

The authors observe that:

They may be correct, but that is not supported by the answers given to their survey. On the contrary, the sexy risks relating to disruption, change and competition are not seen as being significantly worse than they were last year.

The risk of “increased competition” is slightly up. However, have you ever heard of anyone complaining about decreased competition (except for customers and regulators) even though we live in a world of takeovers and mega-mergers?

So let me try to understand… as businesses implement disruptive services that are cloud-based, always-on, high-mobility, over-the-top, and connected to an exploding number of machine-to-machine-wearable-internet-of-thingies, telcos decided the risks relating to gathering personal data, anticipating customer expectations and safeguarding software and copyrights are now a lot lower than they were before?!?

3. Try as you might, you cannot generalize from the answers given.

BDO surveyed 60 telcos. When you think about it, that is not very many. It means that if the survey says 13 percent of telcos said a risk is important, then just 8 people said it was important. Each individual respondent can shift the measure of a risk by almost 2 percent. We do not know the seniority of the people who responded; perhaps it is telling BDO kept referring to ‘the’ American CFO they interviewed, implying he was the only c-level exec that granted an interview. More importantly, it is obvious these 60 people never talked to each other, so they applied inconsistent frameworks for categorizing and evaluating risk. That is why BDO gives us oddball generalizations like this:

Another trend emerging from BDO’s research is for telecoms companies to cite a greater number of risks specific to the regions or markets in which they operate. Nearly a quarter (23%) cite risks in specific overseas jurisdictions. For example, Bezeq, one of the largest telecoms groups in the Middle East, draws attention to “the growth of the Israeli national debt, rising house prices, and uncertainty in political and defence arenas” as risks that cast a shadow over the company’s economic resilience and its future revenue streams.

Thinking about the risks specific to your business is not a ‘trend’. It just means you thought about the risks specific to your business, as opposed to waffling about risks that you know applies to every business, even if you have never stepped inside them. I have nothing against Bezeq, but it is no surprise that the largest telecoms business in Israel is going to be interested in the economy of Israel. Much larger telecoms groups like Etisalat probably do not care about the economy of Israel because they run telcos all over the Middle East, but not in Israel.

Referring to Bezeq as a major player makes me wonder about the kinds of telcos surveyed by BDO, and hence the usefulness of trying to generalize from their responses. BDO states that they surveyed 60 “of the largest fixed-line and mobile telecoms providers”, but you have to go a long way down the global list before you get to Bezeq. Very few telcos are mentioned by name in BDO’s report, and most of those are mentioned in such a way that we cannot tell if they responded to the survey. There are many small telcos in the world, and BDO did not share the data necessary to judge the size and variety of telcos they surveyed.

The survey itself is useless; no halfway competent risk manager will find themselves changing their corporate risk register because they were prompted to think differently about the risks their business faces. The survey essentially asked one vague and arbitrary question, meaning the answers will not be of such a quality that anyone could use them to reach a reliable conclusion.

Do read the report when you have a spare moment; you can freely obtain it here. But if these survey findings suddenly make you realize that interest rate variability is the top risk facing your telco, then your telco has much bigger problems than managing interest rates.