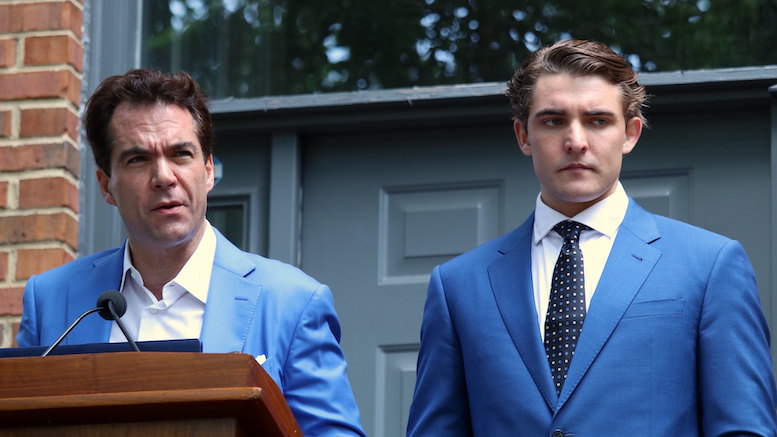 The Federal Communications Commission (FCC), the US comms regulator, wants to impose a USD5,134,500 fine on two notorious political lobbyists and conspiracy theorists for making a series of robocalls to mobile phones without first obtaining the permission of recipients. Jack Burkman (pictured left), Jacob Wohl (pictured right), and Burkman’s business, J.M. Burkman & Associates LLC, are jointly accused of making 1,141 robocalls that violated the US Telephone Consumer Protection Act (TCPA). These calls, which were placed in the run-up to the 2020 US presidential election, were designed to discourage recipients from voting by mail. The calls played a recorded message that falsely implied voter data would be used to impose mandatory vaccinations. The recording also includes the following lines:

Did you know that if you vote by mail, your personal information will be part of a public database that will be used by police departments to track down old warrants and be used by credit card companies to collect outstanding debts?

Burkman and Wohl’s approach to political campaigning is already infamous. Right-leaning publication Spectator USA described them as “shovel-ready with another serving of fresh dirt”. The Atlantic observed that Burkman “is known for spreading conspiracy theories”. Newsweek wrote that Wohl “had gained notoriety on social media for peddling false information”. Their fabrications include claims that:

All of these frauds collapsed when it was established the supposed victims had not told the truth, often because they confessed to being paid by Burkman and Wohl to lie. With so many people already forewarned about Burkman and Wohl’s publicity-seeking shenanigans it is hardly surprising that their use of robocalls to influence the election came to the attention of the FCC. The FCC’s press release observes that their investigation began “following consumer complaints and concerns raised by a non-profit organization”. It goes on to state:

The Enforcement Bureau worked with the Ohio Attorney General’s Office to identify two dialing service providers that provided subpoena responses confirming the robocall campaigns and identifying the clients who had hired them for this service. The Bureau used the subpoenaed call records and recordings of the calls to determine that the calls apparently went to wireless phones and the message was prerecorded. The consumers who agreed to speak with the Bureau about the calls confirmed they had not provided prior consent to the callers. The subpoenas also produced email exchanges between the dialing service vendors and Wohl and Burkman about the call campaigns – including choosing which zip codes to target and “the tape we want to go out.”

The calls themselves identified Wohl and Burkman by name and used Burkman’s wireless phone number as the caller ID. Wohl and Burkman also both admitted under oath to their involvement in the creation and distribution of the robocalls, with Burkman stating in the U.S. District Court for the Southern District of New York, “That is our call, yes, yes” with confirmation from Wohl.

There does not seem much room for doubt that Burkman and Wohl have broken the rules for unsolicited calls, and the FCC’s allegations are comprehensively documented in the Notice of Apparent Liability for Forfeiture (NAL) that specifies the USD5,134,500 penalty they seek to impose. The NAL allows 30 days for Burkman and Wohl to respond with a written argument for why the penalty should be reduced or cancelled. However, Burkman and Wohl are unlikely to get much reprieve as they also face criminal prosecution and civil suits in the states of Michigan, New York and Ohio. The telecommunications fraud and bribery charges they both face in Ohio could lead to a maximum prison sentence of 18.5 years.

Much will be made of the fact that Burkman and Wohl are serial liars whose support for politicians like Donald Trump led them to spread bogus stories that smeared the reputations of several left-leaning candidates and other prominent figures loathed by the far right. However, the FCC would have been unable to take action if Burkman and Wohl had limited themselves to calling landline numbers. The TCPA ban on robocalls is full of holes because many categories of calls are exempted, including pre-recorded political campaign calls made to residential phones. The FCC did not act because Burkman and Wohl are liars, but because they played recorded messages to mobile phone users who had not previously consented to receive them. This fact is hinted at in the FCC’s press release which explained why Burkman and Wohl’s calls were prohibited “regardless of the content”.

The FCC and various state attorneys will laud the successes they are likely to enjoy in levying fines and securing prison time for Burkman and Wohl’s outrageous attempt to influence the presidential election. However, there is a much simpler solution which would bring far greater relief to Americans who feel plagued by robocalls. Robocall blocking service Nomorobo estimated that Americans received a mind-blowing 9.4 billion robocalls about the elections held last year. That equates to almost 45 calls to every adult living in the USA. The overwhelming majority of those calls were perfectly legal because of the exemption for political activities in the TCPA.

America’s divisive politics blinds leaders and voters to the truth that the robocalls they have grown used to would be considered insufferable in most countries. The warped American perspective is now influencing the work being put into preventing robocalls in other countries too, because of the emphasis on needing huge investments in technology and investigation to sustain overly-complicated rules that allow too many exemptions. The US would find it so much easier to protect phone users if it simply ended the unhealthy addiction to using robocalls for political campaigning and fundraising. The overly-politicized nature of US law and regulation means a solution that would be cheap to impose and would deliver great success overnight – banning all political robocalls completely – is also a solution that American leaders refuse to contemplate.