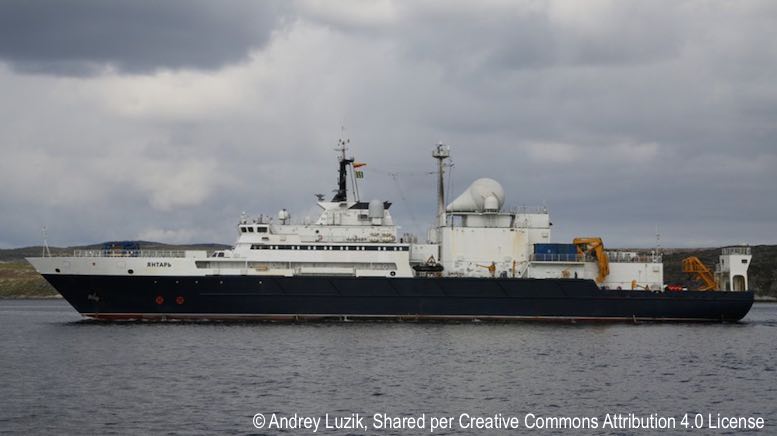 A 350-foot Russian spy ship called Yantar has been operating near to the location of submarine communications cables off the coast of Ireland, reports Naval News. This is how they described the ship’s location:

Yantar took up a stationary position between two undersea internet cables on Tuesday morning. According to AIS (automated identification system) positions collected by MarineTraffic.com, the ship moved into a position between the cables around 4am local time. She has remained there for most of Wednesday before resuming her journey southwest.

In the hours before stopping, it had altered course to run parallel to the expected route of the Celtic Norse undersea cable. The other nearby cable is the AEConnect-1 which runs between Ireland and the United States.

Ireland’s military is aware of the location of the Yantar, which has not violated any international shipping rules, per The Irish Times:

“This ship is transmitting on the automatic identification system and is outside Irish territorial waters. This activity is in line with the UN Convention on the Law Of the Sea (UNCLOS) rules for transit through international waters. Territorial waters are 12 nautical miles from the coast of Ireland and under UNCLOS, there is no restriction on ships operating on the high seas inside exclusive economic zones.”

This part of the sea is of great significance to international communications because of the preponderance of cables running between North America and Europe. Yantar is equipped with submersibles and remotely operated vehicles that are well capable of diving to the ocean floor in this part of the Atlantic. They have the capability to map the whereabouts of cables, attach surveillance equipment or disable them.

An increase in operations by the Yantar, which was constructed in 2015, and her Russian sister ships has prompted Western allies to increase spending on defending submarine cables. The British Royal Navy is building a ship with sensors and drones designed to mitigate the risk of undersea operations and the protection of cables is one of the objectives for NATO’s new command center for the North Atlantic.