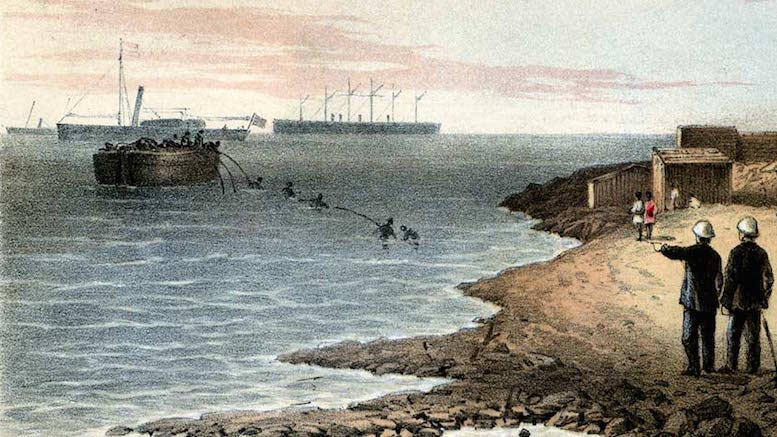 We live on a connected planet, but you need to dive underwater to see the most important connections. More than 700,000 miles of fibre can be found on the floor of the world’s seas and oceans, carrying the bulk of communications traffic. Estimates vary, but between 90 to 97 percent of international voice and data communications occur via submarine cables. The world’s reliance on undersea cables is not new; it was in 1858 that the first Transatlantic cable allowed US President James Buchanan and Britain’s Queen Victoria to set a new record for the rapid exchange of messages between Washington DC and London, though modern cables can transfer 20 terabits per second whilst it took 17 hours and 40 minutes for Victoria and Buchanan to swap 100 words. These cables have always been vulnerable to natural disasters and accidental cuts from the anchors of ships, but repairs are usually only needed in shallow waters near to the shoreline, where cables are easier to access. There would be a greater threat to national security if an adversary sabotaged cables in deep water. That is why the British government recently announced the construction of a new Royal Navy ship that will be equipped with sensors and drones to monitor and protect those cables.

UK Defence Secretary Ben Wallace spoke about the motives for building the ship during the March 21st episode of The Andrew Marr Show.

Marr: …let me move on to something else however, which is this idea of a ship whose entire job is to protect undersea cables. Is it the case that they are threatened by our competitors and what would happen to this country if the undersea cables bringing in the internet, for instance, into this country were cut?

Wallace: Well, I think for the last point the lights could go out if we lose our critical national infrastructure across the board. Cables are one part of that critical national infrastructure, incredibly important, which is why our adversaries, and Russia has certainly taken a deep interest in those cables, not only to the United Kingdom, but obviously to the continent of Europe.

The new Royal Navy vessel is described as a Multi Role Ocean Surveillance ship. It will have a crew of 15 and is scheduled to come into service in 2024.

Arguments for increased national security spending to defend undersea cables have also been made by military strategists in other countries. Former White House advisor Nadia Schadlow co-authored a 2020 article for DefenseNews that warned:

The article claimed that Russia and China pose a threat to the cables that the US relies upon.

Russia and China have developed capabilities in these areas. Russian submarine activity near undersea cables is well-documented: The Yantar, a Russian spy ship, carries mini-submersibles that can either sever or tap them. Russian activity often clusters around crucial, yet hard-to-reach cables because these are difficult to repair.

Chinese officials view control of undersea infrastructure as part of a broader strategic competition for data. One official Chinese Communist Party outlet explained that “although undersea cable laying is a business, it is also a battlefield where information can be obtained.”

A series of proposals were put forward to improve the security of the cables, including:

…the U.S. government should take more responsibility for repairing undersea infrastructure. Currently, cable repairs are considered a commercial responsibility, rather than a national security concern. Classifying cable repairs as matters of national security and developing a public-private operational plan — that includes a division of resources — to repair them is one step toward reducing the response time to a disruption or an attack.

The private sector might also be encouraged to do more.

Companies could begin by securing cable landing stations, while investing in technologies that detect and deny undersea espionage. The executive branch could consider tax incentives to spur these steps.

The issue of protecting undersea cables is also high on the agenda for NATO’s leaders. This was underlined by Jens Stoltenberg, Secretary General of NATO, at a press conference following the 22nd October 2020 meeting of NATO Defence Ministers.

…the ministers received a report on the importance and the vulnerabilities related to undersea cables and the importance of being able to protect undersea infrastructure. I think it’s important to address this, because it is important to understand that most of these cables are privately owned and it’s publicly known where they are. And that makes them potentially vulnerable. So we need to monitor the potential vulnerabilities. That’s partly the reason why we have produced this report. We have tools to protect them and to monitor threats. And we have also established a new Atlantic Command in Norfolk, a new NATO command in Norfolk. And one of the tasks of this new North Atlantic Command is also to look into how to protect, how to monitor threats against undersea infrastructure.

There is a clear evolution in the way Western allies are responding to a perceived threat from Russia and China. The world is entering Cold War 2. The disruption and interception of telecommunications will be an important objective for rivals trying to gain an advantage whilst the conflict remains cold, and to ensure they are prepared if the battle turns hot. Relying on private businesses to defend submarine infrastructure is risky. Just as they are investing in other aspects of national cybersecurity, governments will need to secure vital infrastructure including submarine cables.

The UK is likely to take a leading role in securing submarine cables, with the building of this new Royal Navy ship being just one facet of a multi-pronged strategy. Britain is an island nation and the foremost naval power in Europe. It is unusually dependent on generating revenues from international services like banking and is the most important fulcrum on the European side of Transatlantic communications. So whilst Britain has historically been described as ‘ruling the waves’, its military now needs to prioritize assets beneath the waves. This will prove costly, but the UK has one politician who both understands the significance of protecting undersea cables and the power to do something about it. A December 2017 report called “Undersea Cables: Indispensable, Insecure” from think tank Policy Exchange argued for an eight-point plan including cable protection zones, mandatory sonar sensors on cables, investment in more ‘dark’ cables to provide redundancy, and NATO war games that simulate attacks on undersea cables. The author of that report was Rishi Sunak MP, who became responsible for the UK’s finances following his 2020 appointment as Chancellor of the Exchequer.

Today’s episode of RAG TV will discuss the protection of undersea cables, and the expert guest, Emmy Léger of Araxxe, will share new data about the enormous scale of A2P SMS bypass fraud. Watch the live stream at the RAG TV webpage beginning 5.30pm New Delhi, 2pm Berlin, 1pm London and 8am New York; click here to save it to your diary.