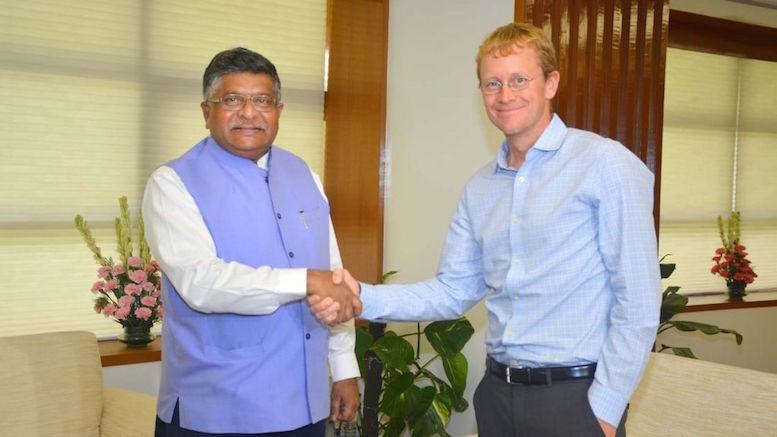 It is an unfortunate fact of life that some people believe the nonsense that other people tell them, and electronic communications has made it easier to mislead dimwits en masse. The consequences can be tragic, and in India they have even proven fatal, with the country scandalized by the murder of dozens of Indians following the spreading of rumors on WhatsApp. In one recent example, a 25 year old woman was lynched in Madhya Pradesh by a mob who believed rumors that a child abductor was prowling the area. Whatsapp has sought to respond to Indian concerns, with WhatsApp CEO Chris Daniels meeting Indian IT Minister Ravi Shankar Prasad (pictured above) to discuss possible solutions.

Some of the responses are sensible and obvious. They include a public awareness campaign, limiting the number of people who can receive forwarded messages, and appointing a Whatsapp ‘grievance officer’ to handle customer complaints. However, one of the government demands appears to contradict the virtue of a service that is purposely designed to be encrypted from end-to-end. Prasad told the press after the meeting that it should be easy for WhatsApp to trace the source of false rumors. This is how The Times of India reported Prasad’s demand:

It does not need rocket science to locate a message…

That seems like an odd point of view for an IT Minister to hold. If cryptography serves a useful purpose, the decryption of messages should require a degree of mathematical sophistication and computational power beyond that available to NASA when they first sent people to the Moon, almost 50 years ago.

The implication is clear: India wants WhatsApp to weaken its encryption. India’s government would not be alone in wanting the construction of back doors so they can read private messages; a recent report by the US Department of Justice argued for similar government rights by quoting like-minded politicians in the US, UK and Australia. But appeasing any government would decimate one of WhatsApp’s core propositions. And it does not take a rocket scientist to appreciate the danger to WhatsApp’s business model if they comply with this demand.