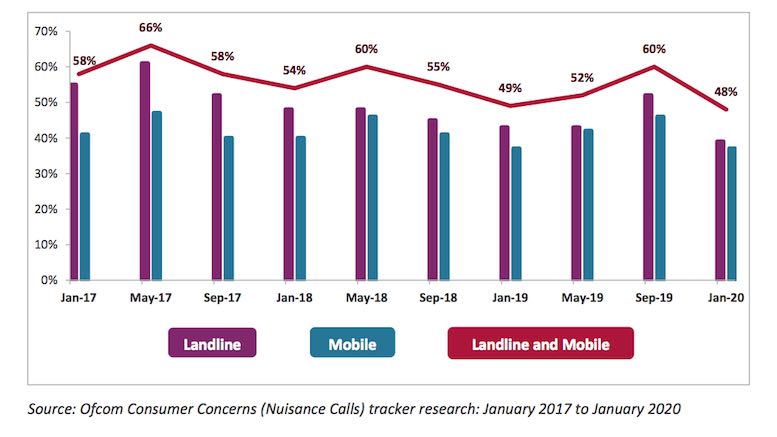 A recent update from Ofcom, the UK’s communications regulator, finds that Brits suffered fewer nuisance calls at the beginning of 2020 than they had in previous years.

Our latest research, carried out in January 2020, shows that:

The graph pictured above shows the proportion of fixed-line and mobile customers who said they had received a nuisance call in the previous four weeks. Surveys are conducted three times a year; the 1,868 customers surveyed in January 2020 reported the lowest rates of nuisance calls in three years. These survey results are consistent with falls in the number of complaints received by both Ofcom and the Information Commissioner’s Office (ICO).

One likely reason for the reduction in nuisance calls is the improved monitoring of how allocated telephone numbers have been used in practice.

Ofcom allocates millions of telephone numbers, usually in large blocks, to telecoms companies. These companies may use the numbers themselves, or sub-allocate them to other companies. We expect all phone companies to take reasonable steps to ensure their number allocations are not misused, including by those to whom they have been sub-allocated.

In 2019, we contacted eleven telecoms companies, whose numbers appeared to be generating high levels of consumer harm. We required them to provide explanations for the high volume of complaints and what action they would take to tackle the issue. This led to significant reductions, ranging between 28-41% in complaints recorded against the telephone numbers for certain companies and, in some cases, withdrawal of the sub-allocation of the numbers from the company generating the nuisance calls (made by the providers with whom we made contact).

Ofcom has brought together a group of UK telcos including BT, Gamma, KCom, Sky, TalkTalk, Telefonica, Three, Virgin Media and Vodafone so they can work together to reduce nuisance calls through the common management of blocklists. Most of these telcos systematically identify the use of invalid caller IDs to prevent those calls from being connected. As a consequence, they collectively block 70 million nuisance calls during an average month.

Some of the less professional members of our community are only interested in exaggerating bad news. We need to celebrate successes too, and these results show that telcos can take sensible and effective steps to reduce the misery caused by nuisance callers. When Andy Rawnsley of Gamma Telecom and NICC spoke about nuisance calls at RAG Bonn 2019 it was surprising to hear that nuisance calling was on a downward path in the UK. Rawnsley’s analysis of UK spam voice calls during mid-2019 contrasted sharply with the rising tide of robocalls reported in the USA, where it was estimated that the average phone user received over 15 nuisance calls every month. International robocall blacklisting business Hiya issued a hyperbolic report that claimed Brits received twice as many spam calls as Americans. Now we can see that Hiya was talking nonsense, whilst Andy, the NICC, and UK telcos generally deserve a pat on the back for quietly but effectively tackling the scourge of unwanted calls. We should be mindful of the good work they do.

You can find and download Ofcom’s update on nuisance calls from here.