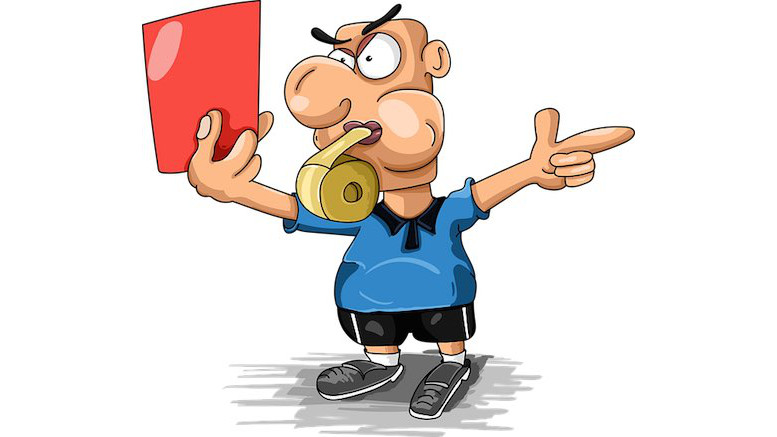 There are some who believe that repeating the word ‘collaboration’ is enough to make them a good person. That is a peculiar belief, given that the word ‘collaborator’ also has a negative connotation; it can refer to traitors who help enemy forces that invade or oppress the population. Collaboration is good if you collaborate with the right people, and bad if you collaborate with the wrong people. For instance, when we talk about the need for telcos to collaborate in the fight against fraud, it would make no sense to compromise with those telcos that deliberately cause, exploit or profit from fraud. That means some telcos need to be excluded. There are also some vendors that should be excluded by our community of professionals.

Exclusion is a tool that can be used temporarily or permanently. However, nobody will become rich by showing red cards to the vendors who try to win by cheating. It is easier to take their money and look the other way. A weak and disjointed community lacks the resolve to enforce a lasting ban, though punishment is vital to maintaining and improving standards of behavior. A vendor that behaves badly may be coerced into reforming its ways, whilst being instructed about what it must do to regain acceptance. But a vendor that refuses to reform should be suffocated of funds until it dies or chooses to leave our community forever.

To punish a vendor may sound harsh, and difficult to achieve in practice, but any penalties levied on bad vendors will serve the interests of every telco and every good vendor. If badly-behaved vendors were excluded from our community, then well-behaved vendors would enjoy greater profits. Punishing bad vendors is even in the interests of silly telcos who make purchases from vendors because they offer impossibly cheap prices, sometimes leading the vendor to go bust soon afterwards and their customer to realize they have made a false economy.

Lots of time and resources have been wasted on ill-conceived projects that delivered the products and services which lousy vendors wanted to sell, as opposed to the products and services that telcos needed to buy. Sometimes a better vendor, with a more appropriate product, was available, but the telco wanted to believe exaggerated promises instead of adopting realistic objectives. That is the danger when weak and impressionable telco staff meet vendors that promise a new project will generate ‘one or two’ percent of revenues whilst nobody with sufficient experience highlights the use of misinformation to distort the forecasted returns. This is why our discipline is known for making sensational claims which are followed by disappointing performance. Exclusion is necessary, or bad vendors will continue to cheat telcos, abuse rivals and make fools of us all. Their failings have directly and indirectly damaged the reputation of the entire profession, making it harder for the rest of us to thrive.

How should we determine who is good, and who is bad? Running the Risk & Assurance Group (RAG) means I have to be a referee whenever one vendor complains they are being treated unfairly relative to another. Any sports fan knows that referees receive little affection. But the job needs to be done, or else there will be chaos on the pitch. And the interests of fairness still demand that a referee enforces the rules, even when nobody else is watching.

Let me tell you a true story about what it means to be a referee. RAG London Online is coming soon, but before the coronavirus pandemic we were planning to hold a physical meeting in London. RAG’s big free European conferences always attracts a lot of interest from vendors who want to participate. This is a message I received from one vendor.

I’d like to receive information on sponsorship packages for the event in London.

Could you please provide?

That is a pretty routine enquiry from a vendor wanting to pay money to meet telcos. There is only one problem with the query: it comes from a vendor that has been repeatedly told it is barred from RAG conferences. So not only did they behave so badly in the past that they were banned from RAG events, they refuse to accept what this actually means. I have a theory as to why this vendor cannot comprehend its exclusion from RAG. It is because no other association would turn down their money.

You may be wondering why this vendor was barred from RAG. Several years ago they purchased a basic sponsorship package to a conference, and thus obtained the contact details of everyone who attended. RAG, unlike at least one association I can name, does not wave around lists of attendees as if we still lived in the era before data protection laws. RAG puts in place a contract with sponsors that explicitly addresses data protection. The information is sent to the specified representatives of the vendor, so there is a clear line of accountability. Whilst RAG discourages sponsors from cold-calling telco managers they have not previously spoken to, we acknowledge their are legitimate reasons why most vendors will want to contact the people they meet at conferences. Their contract with RAG sets limits on what vendors may do with the contact information they receive. But it would never occur to me to write into a contract a clause saying vendors should not tell outrageous lies to the people they are calling.

I know that the vendor in this story lied to the telcos attending a RAG conference because:

This is the reason why that vendor is banned from RAG, and will remain banned until they express a genuine desire to change their ways. But I doubt they will ever change. They are so inept that they committed a foul on the referee. And they now keep asking to rejoin the game, without showing they are willing to respect its rules.

I will not tell you the name of this vendor, because that would be rude, and possibly get me into lots of trouble. But I will tell you that they sponsored a rival conference recently. Some of their money undoubtedly reached the pockets of people who like to use the word ‘collaboration’ more often than they should. I cannot speculate about what the vendor did with the information it obtained by participating in that conference, or whether the organizers of that conference care. It matters to me because my nonprofit association is turning down easy money just to pressure vendors into adopting higher standards, which includes telling the truth. If you also care about improving standards of behavior in our field, and want red cards to be shown to the worst players, then you know who is on your side.