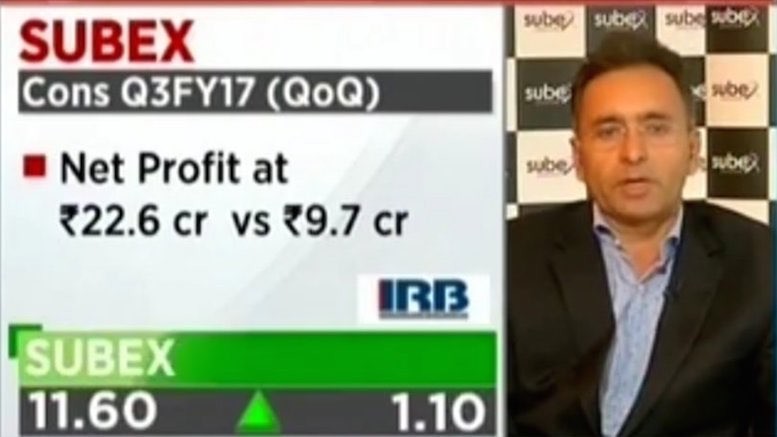 Subex CEO and MD Surjeet Singh took to the airwaves last week after his company announced good Q3 figures. The numbers were definitely positive. Q3 revenues were USD14.2mn, up 15 percent compared to the previous quarter and well above average for recent years. Operating profits rose from USD2.3mn in Q2 to USD3.9mn in Q3. Singh was reluctant to state a target for Subex’s future revenues, though the interviewer’s repeated questions eventually prodded him to say “double digit growth would not be out of place.”

Singh was happier to talk about the fact Subex had agreed “two large multi-year multi-service deals with two of our existing customers.” Subex has consistently maintained a policy of stabilizing its long-run performance by persuading customers to sign extended contracts. Singh also mentioned that two businesses had engaged Subex to provide proofs of concept for a new security offering related to the Internet of Things.

After several years of restructuring Subex’s debts, it was not surprising to hear their boss talking about the company ‘cleaning’ its balance sheet and generating free cash. Singh referred to Subex coming through a period of transition. This is a good line, though it also raises the expectation of better results in future without clarifying what services and products will drive growth.

In contrast, it was clear how Singh wanted to pitch Subex to investors, saying that…

…we serve almost 70 to 80 percent of global telcos, which is actually great news simply because that level of installed base is a very healthy asset for any company. What we need to do is to basically mind those customers and actually undertake a transformation journey with them in the digital transformation that is happening in the telcos… And we are well positioned. Our size could be a source of advantage, given that we are nimble, we are boutique, we are niche. And also what we touch is critical because we have access to the [telco’s] entire set of data and information…

Evidently the Subex boss wants to emphasize how his business could create new offerings or new ways to exploit data, rather than talking about the prospects for its mature RAFM products and services.

One surprising slip was that Singh talked about saving the company from the “near brink of bankruptcy two, three years ago.” The message previously given to investors and customers was never that pessimistic. Language like this might still spook customers who worry about doing deals with suppliers who cannot be relied upon. Nevertheless, Subex’s boss was upbeat about the company, observing that Subex had endured short term pain to ensure it had visible and predictable revenue streams over a longer period, as reflected by a contract book worth over two years of current revenues.

You can watch the CNBC interview of Surjeet Singh below.