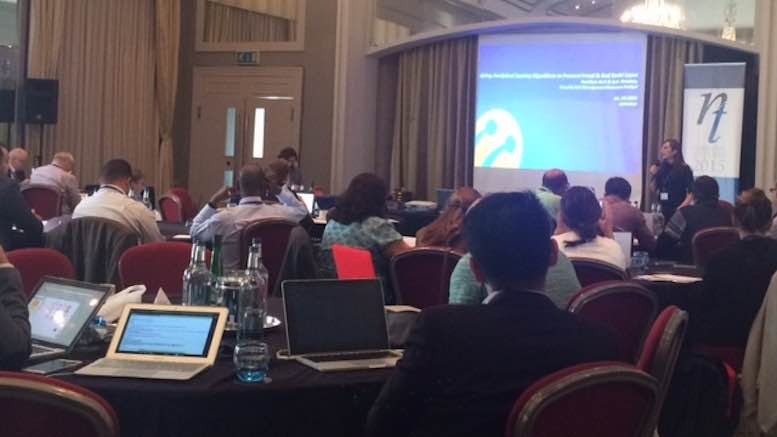 Last week I had the honor of chairing Neural Technologies’ annual user forum, which was held in Windsor, England. You might expect my report about the event to focus on software and data, presentations and workshops, and fraud and assurance. However, you would be wrong. Today I am going to write about two very different topics that also influence success in business: kindness and conversation.

Many of us are computer programmers or accountants. We are capable of understanding the world through logic and numbers. Most of our efforts revolve around the probabilities of certain risks, and the financial impact they may have. Every computer system is built on cold hard rules like 1+1=2. But as much as we would like people to follow good consistent rules, they respond to warmth and emotion as much as logic and controls. Neural is a business that has built its reputation on the strength of their technology, but what stood out in Windsor was the way they cared for their customers as individuals. There is no objective scale to measure such things, which is why we never see them presented on a dashboard. However, personal relationships matter very much. Sometimes we need to be reminded to put human relationships into context, alongside the delivery of SLAs and RoIs.

It was unfortunate that problems with the hotel’s services delayed the beginning of the day’s agenda. This had a knock-on impact, making it very difficult to go through all the talks and activities that had been scheduled. People who have prepared a presentation naturally want to speak, and should not be disappointed. Content is important, but so are tone and pace. The danger when playing catch-up is that we settle for a tone and pace that is far from ideal, in order to avoid cutting content. And there was no doubt that the speakers, both from Neural and the telcos in attendance, had plenty of good content to share. So how should a chairman try to resolve this tension?

With the benefit of hindsight, I realized that I should have given some advice before the event began. In that respect, a good chairman should be like the conductor of an orchestra: important work is done during the preparation, prior to the actual performance. Neural’s agenda was not especially crammed, and it looked to me like there were opportunities to catch up if delays occurred. However, I should have made a demand which I failed to make. I should have demanded ten minutes of time just for me, between every talk.

“Madness!!! Who wants even more of that idiot Priezkalns talking his gibberish!!!” I thank those of you who shouted that, because I completely agree. You are correct: nobody wants to hear even more of my voice. The reason a chairman should demand time is not so he can consume it. The chairman should have time so he can give it back to the speaker, and to the audience. Crucially, he succeeds if his time is given back as a conversation between speaker and audience, instead of a presentation given by the speaker, to the audience.

The successful chairman does not succeed because of what he says, but because of how he facilitates the meeting, enabling everybody to make the best contribution they can. He is a third party that interrupts the dynamic of the other parties precisely so he can improve the flow between them. If nobody else thinks they own the time belonging to the chairman, the time given back by the chairman becomes a gift, a positive that contrasts with the tendency to watch the clock and worry about lost time.

Human nature causes some speakers to start apologizing for the time they have spoken even before they have said anything else. The trick is to encourage speakers to cut their content to a more aggressive schedule than you will really permit them, so their prepared talk leaves the audience wanting more. Then the audience can receive more – the encore is the question and answer session that follows each presentation. Hence it is vital to allow time for questions and answers, but not to let the speakers know what that time will be, in case they are tempted to prepare a longer talk.

I have given a lot of talks over the years, and one thing I realize is how hard it can be to stop talking, if you think the audience is not listening. The silence of an audience is daunting. If they did not respond to the last thing you said, you can feel compelled to something more, in the hope they will respond to that. But whilst this is natural, it does not lead to the desired outcome. If the speaker keeps talking, the audience keeps listening – meaning they will stay politely quiet, instead of interrupting. Hence the job of a chairman is to be like a safety net, allowing the speaker to step off the lonely high-wire of their formal presentation, trusting the chairman will not allow them to fall upon a floor of stoney silence. Instead the chairman’s role is catch the speaker in a conversational net, whilst welcoming others to bounce upon it.

Once the audience hears a conversation, as opposed to the single voice of a prepared monologue, they know the parameters of polite behavior have changed, and they feel free to contribute. This is better for everybody, but it does mean having confidence that a conversation will follow the presentation. What was striking about Neural’s event was that conversation did follow each presentation – but only when the time permitted it.

Putting constraints on the speaker before they prepare their talk is ultimately a benefit to the speaker, if the chairman does their job properly. It means a good chairman has time to orchestrate interaction between the speaker and audience. That interaction allows the speaker to learn about, and respond to, what really interests the audience. The speaker can then demonstrate additional knowledge and insights, not included in the prepared talk, by answering the audience’s questions. In turn, the audience also benefits from this interaction. They not only ask questions, but they may share their own insights. And breaking up the sequence of voices, by having shorter talks but longer Q&A, makes it easier for everyone to pay attention for long periods.

So, in hindsight, I should have told Neural’s speakers to cut ten minutes from the length of each content-rich presentation they prepared, only to reassure them they would have gained ten minutes of more valuable interaction as a reward. When away from the main conference room, Neural’s team had a tremendous rapport with their customers, and it is clear they often talk. But by becoming too focused on the content presented in the room, there was less opportunity to build upon their existing relationships, and hence enable a wider sharing of ideas between customers who do not know each other. After a spell in the hotel bar and time spent around the dinner table, it was very apparent that both supplier and customer enjoyed easy conversation with each other, and the customers got on well with each other. The goal is to make room for that less structured style of interaction within the formal agenda.

Putting my failings as chairman to one side, some tremendous dialogue did occur in the main conference room, especially in the afternoon when we had largely caught up with the schedule. There are too many examples to give here, but let me highlight a couple which illustrate the audience’s engagement.

Turkcell gave a presentation on predictive analytics for managing subscriber credit risk. This was fascinating both because of the advanced techniques they had implemented for scoring the risk associated with each customer, and because discussing expectations in one country naturally prompts comparison to norms in other cultures. The audience responded accordingly. They asked some very involved and detailed questions about predictive analytics, but also discussed how Turkish customers differed from other nationalities.

In parallel, the topic of OTT bypass proved to be a recurring theme during the day. This obviously resonated with the audience, leading to a continuing sequence of discussion and experimentation during coffee breaks. Come the end of the formal agenda, Revector’s Andy Gent
remained sitting around a table with some of Neural’s customers, as they dialed numbers whilst roaming on a UK network, observing how the calls terminated on the Viber application of the receiving party’s handset. This impromptu team collaborated to great effect, scrutinizing where the bypass had taken place, and analysing the undesirable implications for end users. If we had more time, the event would have benefited from turning this ad hoc investigation into a workshop-cum-panel discussion on how to detect and respond to OTT bypass.

As an outsider, it is normal to evaluate any vendor based on the technology they offer, the marketing they push out, the sales they announce, and so on. There will be few opportunities to observe their relationships with customers. Seeing the obvious warmth between Neural and its customers gave me a fresh insight into their business. Neural is proud of their products, and at the forum they may have talked a little too long about them. But it is clear they also listen to what their customers want, and care about their needs, both on a business and personal level. Though the power of listening is hard to measure, there is no doubting how much it contributes to success. On that basis, I have confidence that Neural’s ambitious recruitment is allied to solid foundations for growth.