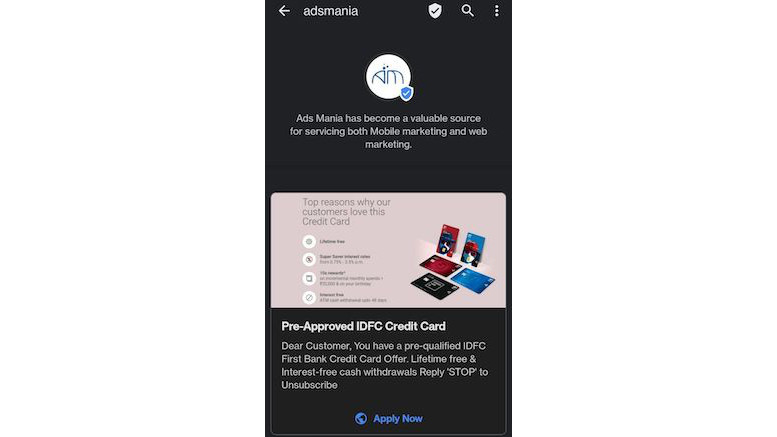 You wouldn’t use a Lamborghini to pull a trailer, would you? The Lamborghini brand is also used to sell agricultural machinery but nobody would think one of their V10-powered sports cars would be suitable for moving furniture from one home to another. However, the metaphorical equivalent occurred in the Indian communications sector recently, when high-powered business messaging services were suddenly co-opted to send a stream of spam advertising messages to unsuspecting mobile phone users. Google soon intervened to stop the use of their Rich Business Messaging (RBM) technology being abused in this fashion, but how did a precision tool like RBM end up being used for clunky spam messages?

On May 18 The Verge published an article with the following headline:

Google Messages users in India are reportedly drowning in ads

News quickly spread around the industry. My initial reaction was that Google Chat was being used in simboxes to spread spam over Rich Communication Services (RCS), the person-to-person (P2P) equivalent of RBM, which allows businesses to send sophisticated messages on an application-to-person (A2P) basis. However, the true story proved to be a little more nuanced.

Google refers to RBM as an ‘upgrade’ of SMS. This puts it mildly, because it boasts considerable advantages with respect to branding, rich media, interactivity, and analytics for those organizations which choose to send RBM messages to their customers. But even the most powerful communications channels can be co-opted for banal spam, just as a foolish driver could attach a trailer to the back of a Lamborghini sports car. RBM is designed to be spam-free and smish-free due to the use of only verified sender IDs which eliminate impersonation and spoofing, allowing mobile operators and messaging service providers to build a valuable ecosystem. Enterprise use of the channel has delivered exceptionally good engagement and return on investment. So what went so badly wrong in India? The mistakes made in India had nothing to do with the technology, and actually proved the technology works exactly as intended.

India has long had a mobile messaging spam problem. The first step that the Telecom Regulatory Authority of India (TRAI) took to address SMS spam was with the Telecom Commercial Communication Customer Preference Regulations (TCCCPR) 2010. These mandated that service providers must differentiate between two different A2P SMS types:

Typically transactional messages are provided with a better class of service and, as such, are priced slightly higher than promotional A2P.

The early regulation was clearly not enough because, in 2018, TRAI introduced TCCCPR 2018 which called for Distributed Ledger Technology (DLT) to be implemented to tackle spam. The consequent ledger maintains a register of senders and protects subscribers from unwanted SMS messages according to their DND status. To put it simply, Tanla Platforms Ltd created an anti-spam tool for the Indian market based on blockchain technology and which they market using the name Trubloq. There were some teething troubles but Trubloq is now the world’s largest commercial blockchain solution, processing over a billion transactions per day and preventing an immense number of unsolicited spam SMS messages. But if you stop spammers using one form of communication, they will try to switch to another…

The amount of ads its sending is crazy, multiple every day. Yes, these are NOT messages, these are ads being pushed by the app to 🇮🇳 Indian users.

It's the default messaging app on most Android phones here. 😑 pic.twitter.com/8EYnIh5cd9

There are two key properties of the Indian market which allowed this to happen:

To be fair to the spammers, their intentions were perfectly clear. What would you expect if asked to approve a sender agent that calls their business Ads Mania, other than a manic stream of advertisements? The tweet from Ishan Agarwal shown above highlights adverts from Ads Mania, but he also shared screenshots from RumyCircle, providers of online gambling, and also from mainstream businesses like Kotak Mahindra Bank and Flipkart. Much like email, offering a free channel for communication is an open invitation for spam, and spammers do not need to be invited twice.

These unwanted RBM messages could immediately be resolved by the Indian mobile operators. They simply need to do the following:

My fear was that if Indian mobile operators didn’t self-regulate quickly then TRAI will get involved. RBM would then become subject to the same, or even more regulation than SMS. However, Google has forestalled further regulation through the ultimate sanction: they quickly withdrew RBM from the Indian market. Hopefully this will prove to be only a temporary suspension of services, but a lot of work needs to be done to restore trust.

It may seem strange that I need to write this, but if you want to haul a trailer then use a 4×4 SUV, if you want to experience a hypercar then try a Lamborghini, and if you want to advertise your business’ services to mobile phone users, ensure you have the subscriber’s permission and use each communications channel wisely. Mobile operators also need to play their part by responsibly managing who has access to communications services. SMS and RBM are incredibly powerful engagement services when used correctly.