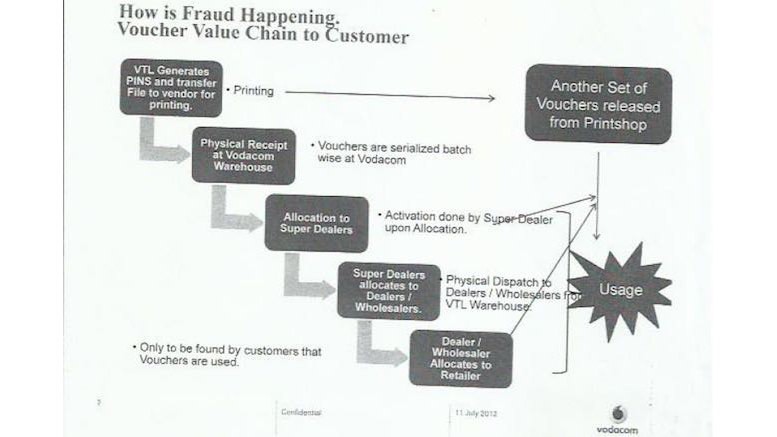 Following allegations of a massive cover-up, a Tanzanian parliamentary committee has ordered a speedy enquiry into the sale of pirated electronic recharge vouchers by Shivacom, a former dealer for Vodacom Tanzania, reports Tanzania’s Daily News.

The Tanzania Revenue Authority, the country’s tax agency, and the Tanzania Communications Regulatory Authority have been told to investigate claims that Shivacom knowingly printed airtime vouchers that duplicated those already issued by Vodacom Tanzania. They have been set a June 20th reporting deadline by the Parliamentary Committee for Industry, Trade and Economy.

Vodacom Tanzania, an operating company in the South African headquartered Vodacom group, contracted Shivacom to print and distribute electronic top-up vouchers between 2007 and 2012. Subscribers were reportedly cheated, finding they paid for vouchers that could not be used because they duplicated PIN numbers that had previously been issued. Vodacom has never publicly apologized for the harm done to customers.

Not surprisingly, the Members of Parliament noticed that the fraud, alleged to be worth USD350 million, also impacted the tax collected by the state. Committee Chairman Luhaga Mpina says he wants Vodacom to pay the Value Added Tax that was levied on the sale of the duplicate vouchers, and argued that the scale of the fraud suggests Vodacom was guilty of much more extensive tax evasion.

Although the fraud ended in 2012, it recently gained attention because an unknown whistleblower set up a website that published extensive details and claims about the scandal. The website uses the name “255whistleblower” and can be found here.

The whistleblower appears to have a grievance against the departing MD of Vodacom Tanzania, Rene Meza. The whistleblower’s website was published soon after Meza resigned his position at Vodacom and was announced as the new CEO of Ooredoo Myanmar. Other publications, like allAfrica, have repeated the blogger’s claims that Shivacom paid a USD5mn bribe to Meza, in exchange for his assistance with covering up the scandal.

It has been established that you’ve been fraudulently and in total breach of the contract, producing duplicate pirate recharge vouchers using PIN numbers provided by Vodacom, and which you directly distributed to customers and rendered the original recharge vouchers supplied to Vodacom of no value and usage by customers.

The letter also talks about “enormous business losses” and say these will be subsequently quantified. However, the blogger claims that instead of receiving reparations from Shivacom, Vodacom paid compensation to Shivacom for the early termination of their contract.

The whistleblowing website gives a very negative portrayal of Meza, suggesting that whilst he was not to blame for a fraud that had been occurring for years before his recruitment by Vodacom, the new MD immediately sought to exploit it. It claims that an ‘insider’ told the following story:

“Rene Meza confronted Tanil about the scandal and demanded a $10 million kickback to keep quiet. Tanil arrogantly told him to piss off, so Rene retaliated by instructing Vodacom’s legal counsel to write a letter to Shivacom to terminate the electronic recharge voucher agreement for breach of contract,” said a well-placed source.

“Tanil went to Vodacom South Africa’s Group CEO, Shameel, and gave him a bribe of $400,000. Shameel then instructed Vodacom Tanzania to settle the matter with Shivacom. Rene Meza finally settled for a $5 million bribe from Tanil and Vodacom paid Tanil hefty compensation for termination of the contract despite the obvious fraud.”

The blogger also claims that Meza may be used by others to distract attention from their own wrongdoing:

It has now been revealed that Meza secretly met at least 10 times with Somaiya and Rostam Aziz, a Vodacom Tanzania shareholder, to negotiate the bribe.

“It is feared that Mr Meza could flee the country after his resignation to avoid criminal prosecution over the matter,” said another insider.

“Rostam and Tanil would also favour Meza’s exit from the country because they can use him as a scapegoat and thwart any criminal investigation against them.”

It is impossible to verify the truth of all the claims made by 255whistleblower, but there is no doubt that the site draws on inside knowledge. As well as publishing copies of letters between Vodacom and Shivacom, it also reproduces internal Vodacom documents that are marked ‘confidential’. Some of these look like the kinds of reports and presentations that may be written by internal auditors. They describe the methods the fraudsters used (see here and here). The diagram above is also from a confidential internal document, explaining the overall scam.

Whatever the truth behind the claims, whistleblower255 has ably demonstrated that corporate ethics needs an upgrade for the 21st Century. Whilst the businesses involved may prefer a quiet understanding over how to handle the consequences of fraud, modern technology creates new opportunities for reputation damage. Even if nobody is found guilty of any crime, Vodacom knew that an “enormous” fraud had been perpetrated against its customers, but never said sorry for the weak internal controls that allowed the fraud to continue. If these details had never come out, then perhaps Vodacom would never have needed to say sorry. But if you only say sorry when you need to, then you are already leaving it too late.