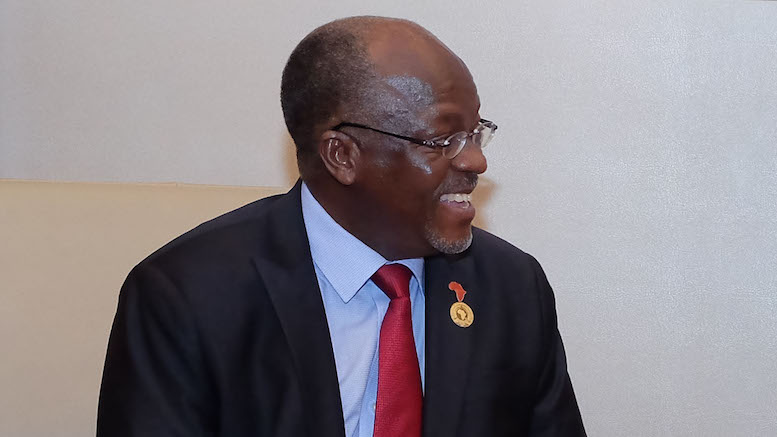 Corruption in Africa is a real problem. Many people are familiar with obvious cases of corruption: tenders which are inflated, government projects which are designed to loot public coffers, and pervasive bribery. There are countries where the state and big business are virtually inseparable. In Mozambique, former president Armando Guebuza was known as “Signor Cinco Por Cento” or Mr 5%. It was rumoured that for each big deal to proceed during his reign, 5% of the deal value had to find its way into his bank account.

There is another subtle form of corruption that is being perfected in countries like Tanzania under the leadership of John Joseph Pombe Magufuli (pictured). One way this is coming to international attention is the way his government keeps imprisoning executives from telcos again and again and again.

When Magufuli was elected, he appeared very determined to fight corruption, streamline public services and put an end to wastage in government. Government officials who were used to international trips that wasted lots of money were shocked by the lockdown Magufuli put in place. Workers who did not put in a good day’s work found themselves in a very uncomfortable spotlight; His Excellency would suddenly appear in offices to see which desks were unmanned. Folks would be fired on the spot. He made no secret of favouring a culture where the first rule is: “throw them into prison”. This tactic that would be applied to those who did not appear to work in support of his (very ambitious) development agenda.

East Africa started praising Magufuli. The concept of “Magufulification” was touted as a way to rise above the mediocrity that pervades governance in this part of the world.  Magufuli has his praises sung by others, including a professor from neighbouring Kenya who travelled to Dar es Salaam and performed the role of Court Jester, as can be seen from the 24th minute of this video . The whole video is entertaining though if you have time to see how low pseudo-intellectuals can sink. Never mind that the good prof is also a plagiarist but that is a story for another day. It is sufficient to state that you may not be getting your money’s worth if your favourite bootlicker is known for lacking original ideas and passing off the works of others as his own.

A few voices did question Magufuli’s tactics – his leadership was long on optics and short on sustainable systems. However, he largely endeared himself to a significant part of the Tanzanian citizenry and to many beyond its borders. In Kenya, Twitter would sometimes be ablaze with hashtags such as #WhatWouldMagufuliDo as a cry against the shoddy leadership of the current Kenyan President, Uhuru Kenyatta. It did not help that Uhuru, apart from being the son of the first president, has no other credentials.

Magufuli is completing his first term in power this year and will most likely win the October 2020 elections. Incumbents do not typically lose power in Africa and he has engaged the state machinery to ensure his way back into statehouse is clear. Over the past four years, he has decimated the opposition. A vocal MP was shot and is still in exile. The leader of the opposition and his officials have been imprisoned a few times. His last stint was in March. When the opposition leader’s colleagues went to receive him upon his release, they were set upon by the police, breaking an MP’s arm in the process.

Meanwhile, the press has been cowed into submission. Musicians have been reduced to singing Magufuli’s praises. In this rendition, crooner Harmonise can be heard moaning Oh Daddy Magufuli and the opening line is: I wish I can run into Magufuli so that I may get to kneel in front of him.

It seems the few voices that were speaking against Magufuli had a point after all. While he was doing everything to be seen to fight corruption, Magufuli was building a corruption network right before everybody’s eyes. He has created a form of governance that perverts the law and goes against the principles of justice. His genius is that he appears to operate perfectly within the law. His magic wand is the Economic Crimes Act (ECA).

Let us look at the problems that have faced operators such as Halotel, Zantel and Vodacom. Their executives have ended in prison charged with economic crimes. In actual fact, these operators operate under the (very comprehensive) Electronic and Postal Communications Act (EPOCA) and it prescribes the penalties that the comms regulator, the Tanzania Communications Regulatory Authority (TCRA), and judicial institutions can levy for any non-compliance. If EPOCA was to be followed, TCRA would levy fines commensurate with the offences. Failure to pay fines would lead to a civil case in court. Failure to comply with the outcome of the civil case would attract criminal charges. The processes within EPOCA allow operators to table evidence against TCRA as they defend themselves. That would be very inconvenient to Magufuli’s style of government.

As such, the state has found refuge in the Economic Crimes Act (ECA). The ECA has two points that help in oppressing operators. Firstly, a person charged with economic crime is not entitled to bail. In a curious set of circumstances, it is not the judges who determine whether a suspect is eligible for bail. The Director of Public Prosecutions determines this and is allowed to apply a certificate of ‘no-bail’ to the accused. Why would he ever allow one to get bail after he has taken the person to court? In public opinion, it would appear as if the DPP is unsure of the case. As such, the DPP has never issued a certificate of bail for an economic crime. What a surprise!

Moreover, whereas it is possible to charge the company (as a legal entity), the ECA gives power to DPP such that he can enjoin directors, principal officers of the company and/or any employee in the case. This is where the government has found a way to hold the bull by the balls.

It would be perfectly possible to prosecute Halotel, Zantel and Vodacom without throwing their employees in prison. However, let us ask ourselves what would happen in such a scenario. These corporates would defend the case and clear their reputation. The evidence and counter-evidence would have to be tabled in court. Options of appeal would be exercised. In the presence of a judge, close examination of the arguments would be allowed under the law.

What would this mean for TCRA?

Instead, what happens now is quite simply a farce.

A few months later, the same cycle is seen, with a different operator. How is this not kidnapping and exacting a handsome ransom?

To be fair, TCRA is between a rock and a hard place. They work at Mawasiliano Towers, one of the tallest buildings in Tanzania, and have to prove that they deserve to look down on others.

Tanzanian President John Magufuli sacked the head of the telecoms regulator in 2016, saying the watchdog failed to monitor the industry, resulting in the loss of potential tax revenues of over USD 180 million a year since 2013.

It is unclear how His Excellency arrived at such a figure but it essentially means the TCRA folks, to avoid facing the fate of the former Director General have to recover substantial money from the telcos. Worse still, they have a system from the nefarious GVG to help them do this and it was launched by none other than His Excellency. Failure to impress the president might see the TCRA folks become suspects of economic crime.

Laughably, the Director General of TCRA has gone as far as to attribute the growth of mobile money to the presence of the GVG system. He only had to look at the growth trajectory of mobile money in places like Kenya, Mozambique and Lesotho to understand the GVG system has nothing to do with it. However, when you are paid to say what the thin-skinned president (with a penchant for pulling figures from nowhere) wants to hear, you need neither competence nor honesty.

It is fair to say that just being associated with the private sector is risky in Tanzania. On 30th March 2020, Salum Shamte, the Chairman of the Tanzania Private Sector Foundation (TPSF) died in custody. He was facing three counts of economic sabotage, including money laundering. The state transferred him from Maweni prison in Tanga to Dar es Salaam for treatment but it was too late for him. Shamte was also the chairman of the Business Council of the Southern African Development Community. His was another big name felled by an unjust system.

The beautiful part of this charade is that the media is doubly scared of Magufuli as he consolidates his hold in the country. Recently, The Citizen, one of the leading media houses, fired a columnist who dared to question Magufuli’s response to Covid-19 on Twitter. All he demanded was for Magufuli to follow science instead of asking people to keep going to church in the hope of fighting the virus through faith. The Citizen quickly distanced itself from a gifted columnist in order to protect its business.

Tanzania’s tragedy is that its innocent population are paying (and will continue to pay) for the corrupt practices of Magufuli. These abuses come at a price. The government always chants that the economy is strong and is projected to enjoy unprecedented growth. However, in March 2020, Moody’s downgraded Tanzania’s credit rating to B1 Negative and noted:

The negative outlook on Tanzania’s sovereign rating reflects an increasingly unpredictable policy environment, which weighs on the business climate… uncertainty over the regulatory environment and the government’s policy stance could weaken the country’s growth potential and its ability to attract foreign investment over the long term.

That, if anything, shows that despite the optics, the reality is far from what the Tanzania government would have its citizenry and the rest of the world believe. This truth is known to everyone who have been wrongly imprisoned so Magufuli and his incompetent brood can look good. It takes time for messages like these to reach everybody, but that time is coming. Tick tock.

Debt, Payments and Handsets: How a Global Crisis Leads Revenue Assurance to Find a New Balance

Huawei Founder Says US Politicians Want to ‘Kill’ His Business

How Much Are Revenue Assurance Professionals Paid?

All Leakages and Frauds Suffered by Comms Providers, Ranked by Value

Eric Priezkalns gives a six-minute summary of the largest ever survey of revenue assurance and fraud managers.