It is good to see that Black Swan keeps coming up with thought-provoking content, and this time it was Mark Yelland who stepped up and said what needs to be said. Mark made this important point…

Revenue assurance maturity: perhaps it’s time for that concept to mature as well.

Spot on, Mark. Putting aside my role in developing the RA maturity model, what was a good and surprisingly successful idea is now badly in need of a refresh. As Mark points out, our conception of RA practice keeps moving on. Looking back at maturity, I am amazed at how much was right. The model was first written at a time when only a small minority of telcos had established RA departments. As a consequence, much of the maturity scale was an extrapolation from the early days of roll-out to what we anticipated for the best of the best. However, the model failed to map out the path for some of the increasingly common developments in the best RA functions. This is unsurprising as there eventually comes a point where there are too many variables to accurately forecast the future. The limits of human forecasting explain why 1940’s science fiction writers overestimated the likelihood of moon colonies and talking robots, but never wrote about artificial insemination or the internet. Kubrick and Clarke’s vision in 2001: A Space Odyssey had us walking around space stations in business suits (not yet), making calls from Ma Bell phone booths by dialling numbers from memory (ancient history).

The consequence of forecasting errors means the maturity model can no longer be successfully extended without a major revamp of its basic 5 by 5 grid, and the principles that underpin it. Mark gives one useful example of how the model needs to be developed:

One area I think we maturity modelers have failed to shine enough light on is corrections. Finding revenue leaks is wonderful stuff, but we also need to implement fixes to correct the historical issue and reduce the chance of further errors.

Now I would like to go further, and outline other areas that need more work, but which I personally feel reluctant to tackle. I know that is a cheeky thing to do. That is like handing Christopher Columbus a sheet of paper, whilst calling it a ‘map’. He unrolls the ‘map’ which only shows an arrow pointing West from Europe, and nothing else. “Where is the rest of the map?” protests Christopher. “That’s all we’ve got so far! Please fill in the details, as you go along.” So please forgive the self-indulgence as I briefly describe other areas where we need to revisit the maturity map, and replot the course from where we currently are, extrapolating the new route to maturity.

Find and fix continues to be a fundamental paradigm for revenue assurance, but as Mark points out, we tend to be good at talking about ‘find’ and not so strong at talking about ‘fix’. From a maturity perspective, the goal must be not just to fix a problem. If find and fix is the base of a vital process, then the efficiency of error correction also needs to be improved. If costs of fixing go down, then it becomes worthwhile to reduce leakage further. The maturity model could do with more detail surrounding the efficiency and inefficiency of error correction as found in mature and immature telcos. By doing so, it needs to highlight how to automate fixes and how to streamline workflows. But the model also needs to describe how a mature telco discourages the institutionalization of the find and fix mentality. To be consistent with other parts of the maturity model, a mature business must avoid creating dead-end incentives that lead to permanently employing people to fix issues because there is insufficient motive to address root causes.

The definition of revenue assurance is sufficiently open-ended that it always left room for RA departments to tackle the improvement of margins (despite the very bizarre rantings of Gadi Solotorevsky on this topic – he once insisted that margin assurance fell outside of the scope of RA, before doing a complete u-turn and saying it was inside his scope as TMF RA team leader). But when you read my colleague David Leshem, he is so far ahead of the curve on the importance of pricing and margins that, like Isaac Asimov, it sometimes sounds like he is writing about moon colonies when the rest of us are struggling to get our planes off the ground.

Put simply, much of the margin assurance work that is done by RA departments fails to include any behavioural modelling for customers. That is because all the historic data in the world can only tell you what people used to buy for the prices you used to offer versus the prices your rivals used to offer. You cannot draw straightline conclusions from that historic data to what customers will buy in future, if introduced to new prices, new services, and new competitive offerings. After sometimes positioning itself as a combatant that fights with the marketing function, the next step for RA is to use data in a synergistic way, to support the forecasting of how changes in prices will change sales, and how this relates to costs in order to proactively assure margins. And if you fail to understand what I am writing about, then that explains why David Leshem is so far out in front on this topic, because I barely understand how advanced he is. But the maturity model cannot just be about what we have understood and accomplished today, because it is meant to provide a strategic roadmap. The maturity model needs major re-engineering to address this deficit surrounding our understanding of customers and analysis of customer data. Evolving a complementary relationship between business assurance and pricing functions is going to be a key differentiator between the telcos which deal with problems via internal fights over past ‘mistakes’ (i.e. the historic clash of RA dept vs. Marketing dept) and those that lever information assets across silos, with a view to making the best forward-looking decisions.

Not every telco wants to achieve the same thing. Though markets all generally move towards saturation, there are still some telcos that seek to grow as fast as possible, whilst others work in markets that are fully saturated where cost control and quality of cash generation have come to the fore. And when we talk about ‘saturation’, this is also evidence of a static outlook. Whilst one market may have reached its zenith, telcos and their disruptive rivals will be taking steps to create and enter new markets for services that were never available before. The definition of RA and the existing maturity model is loose enough to talk about common assurance activities relevant to all telcos, whilst leaving room for each telco to set its own particular financial priorities and targets. But is this too loose? And what about goals that are difficult to express in financial terms? How should a business assurance function dovetail into all the strategic goals of the business? Or will it always be a second-rung operational activity that, if it thinks its remit is standalone and unchanging, irrespective of the company’s stated objectives, does not deserve much C-level attention?

For me, this need for assurance to be part of a strategic whole was always part of the maturity model, though I admit it was very vaguely described. It was just too hard to look that far ahead. I think of that part of the model like one of those signposts you find in tourist locations, that show the direction of faraway cities. 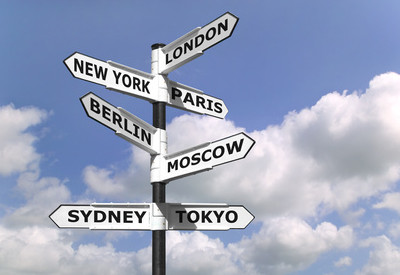 Sometimes we need a reminder there are destinations that lay beyond the horizon. It is not the job of a C-level exec to worry about the same shopping list of pitfalls that an RA manager should worry about, but it is the job of an RA manager to worry about some of the things on the C-level exec’s shopping list, and to help him move the company to where it should be. Synergy to corporate goals cannot be delivered bottom up, with the underlings dictating to the bosses what their priorities should be (yah boo sucks to Gadi Solotorevksy, who would like it that way). One of the reasons for devising the maturity model was to create a strategic context for the evolution of revenue assurance within a business, yet by failing to talk sufficiently about corporate strategy, the goal of alignment has been inadequately covered. This in turn means that key questions have been ignored, like how to review and when to alter the scope of functions that are dedicated to performing assurance. To get really mature, the maturity model needs to address how assurance activities are designed to support actual strategic goals, as opposed to engaging in a fist fight where ‘controlling’ objectives are meant to compete with ‘commercial’ objectives (like those beloved by our marketeer friends). For the maturity model, this would be the hardest upgrade of all, because it demands an upgrade to our vision of what a business is meant to do and how it works as a whole. The task is beyond me, but here I am pointing at the expanse of blue water, with one request for those of you brave enough to set sail on this intrepid voyage: please fill in the details, as you go along…