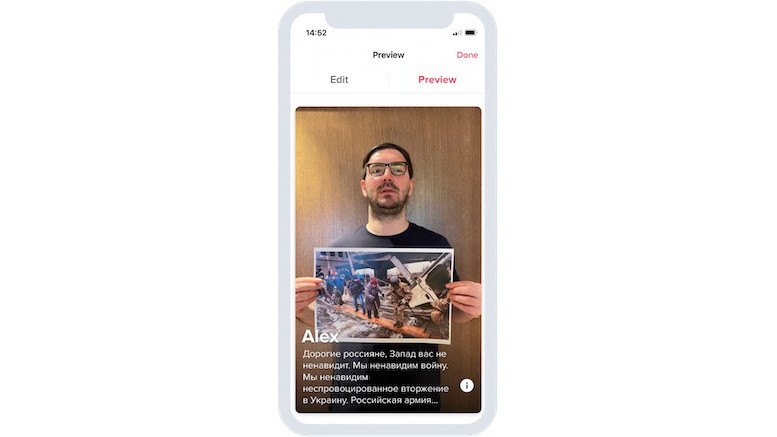 The Russian government has gone to extraordinary lengths to prevent ordinary Russians from learning about the war in Ukraine, including the banning of Facebook and Instagram and the closure of the only remaining independent television station. This has prompted the invention of new ways to circumvent censorship, including hackers creating a free tool that allows anyone to send an SMS message to a random Russian and people with computers in countries that have uncensored internet installing the Snowflake extension for their web browser so others can use their address to access the free web via the Tor network despite Russian ISPs blocking access to Tor servers. The recurring strategy is to enlist as many people as possible in collective efforts to defeat censorship by creating an overwhelming number of routes around it, but not everyone will have the geeky confidence to adopt some of the methods being used. However, you do not need to be a geek to understand how dating apps work, and communication via a dating app is difficult to censor because it is designed to be private. This inspired a Slovakian marketing agency, Jandl, to create their own mass program for messaging Russians via Tinder, the dating app with 75 million users worldwide.

SpecialLoveOperation.com explains how subscribers to Tinder Plus can update their profile to communicate with people looking for dates in Russian cities. They can then use Tinder to send information about the war to the Russians that Tinder matches them with. Jandl provided a series of images showing the destruction of Ukrainian cities that can be incorporated into a user’s profile image, as illustrated above. Users are also encouraged to copy the following message and its translation into the Cyrillic script of the Russian language.

Dear Russians, the West does not hate you. We hate the war. We hate the unprovoked invasion of Ukraine. The Russian army is killing innocent people while Putin is lying and hiding the truth from you. Your brothers and sisters are dying because of the madness and delusion of a dictator. Spread the truth. Make love, not war!

The internet has created many more opportunities for communication, but authorities will try to increase their control by using the power of modern computers to monitor messages, control of key gateways in communications networks, and harassment of any businesses that implement secure encryption. The censorship clampdown by the Russian government and the ingenious responses from many different quarters demonstrates that the cat-and-mouse chase between the censors and their prey is far from over. Lovers of free speech will endeavor to remain two steps ahead of governments that want to decide what information can be disseminated and who is allowed to share it. This kind of never-ending race between two opposing forces will be familiar to any risk professional working in the communications sector.