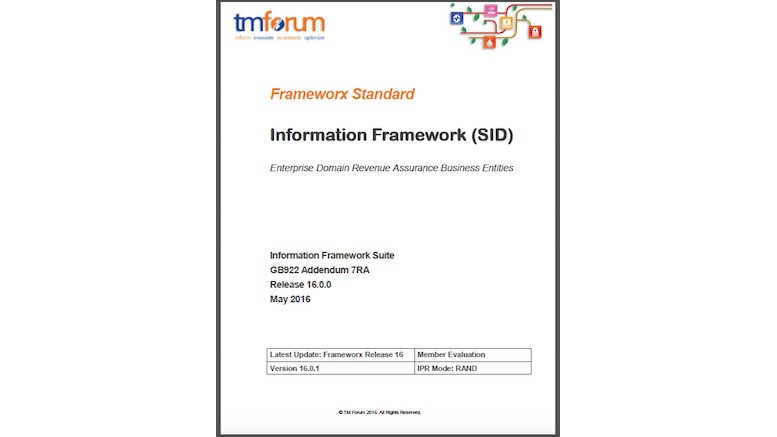 The TM Forum’s Information Framework is better explained by its old title, the Shared Information/Data Model (SID). It effectively maps what data is needed to run a telco and how it gets shuffled from place to place. Revenue assurance is just one of the many components included in the Information Framework, and all have been seemingly reviewed and updated for a new release of the Information Framework, version 16. Because the RA addendum is currently in the member evaluation phase, I took the opportunity to review what, if anything, had changed. The answer was a bit depressing: very little has changed since this document was first written over 10 years ago.

In some ways the lack of change should not be surprising. The SID is about data, and this document only ever reflected a data-oriented view of how to reactively monitor for leakages. It was suited to the thinking of cVidya a decade ago, when they were keen to say their software complied with TM Forum standards. (In fact, this was pretty much the only TMF standard that allowed vendors to sensibly state that their products complied with TMF ‘best practices’.) The document is a kind of checklist which a telco or vendor could apply to their systems. But in trying to generate a checklist specific to revenue assurance, the results are very bland. Put very simply, the checklist says an RA system is supposed to know the difference between good RA outcomes and bad RA outcomes, and when it spots a bad RA outcome that should trigger some kind of RA action. You are all intelligent enough to realize this conditional logic – IF something bad happens THEN do something about it – can be applied to lots of activities, and is not exclusive to RA. So there is no need to update this logic, because it remains as true as it ever was, but it is not fit for purpose either. A mature assurance team should be able to apply this same logic, and all their other skills and techniques, to a much wider variety of challenges than the straightforward leakage reconciliations that preoccupied software vendors a decade ago. But the document itself is still framed as if RA teams only do old-fashioned RA leakage detection.

It would not even surprise me if I was the only person to have properly read this document since it was last updated. For example, whilst the introduction does not matter as much as the real substance of this specification, I find it amusing that nobody in the TMF has ever felt the need to update the following introductory assertion.

The TMF has organized several RA leakage surveys since this sentence was first written, and none of them presented estimates that were anywhere near as high as this range.

It is honestly not worth trying to fix this document. Most of you will never read it, and you can do your job perfectly well without ever needing to. Just keep the awareness of this document in mind if anybody tries to dazzle you by asserting their RA system is ‘TM Forum compliant’ – it means their system checks stuff and creates alarms as a result, which is hardly an impressive boast when described like that.

What would impress is a revolution in thinking, where the thought process for risk determination is applied across all business processes. However, that would necessitate a much more sophisticated specification than the rather mundane logic which underpins this primitive conception of RA controls: if A should be equal to B, but A is not equal to B, then something went wrong somewhere.

Risk management cannot be reduced to a simple dichotomy between mathematical equalities and inequalities. Expressing a systematic logic for a more pervasive and embracing form of assurance would take a lot more effort than anyone is currently prepared to donate to the TM Forum and its Information Framework. I believe we will develop it eventually. But whoever takes the lead will not be volunteering to capture their innovations in documents like these.

The TM Forum’s GB922 Revenue Assurance addendum R16.0.0 is currently available for evaluation by TMF members, who can download it from here. Anyone wishing to submit feedback has until July 1st.

Why Telecoms Assurance Must Become Agile