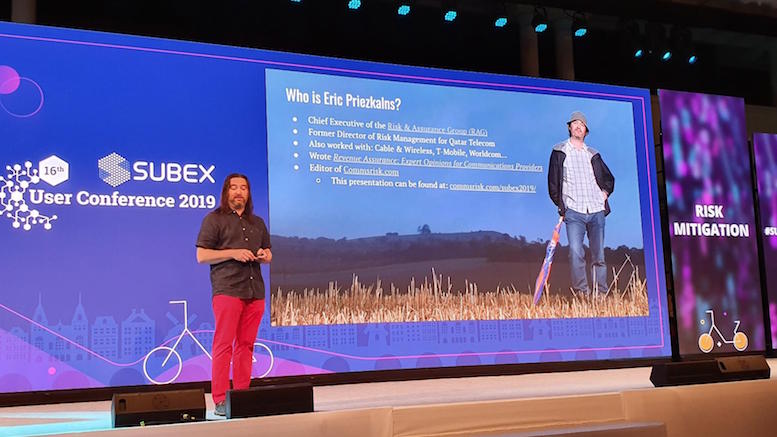 It was a pleasure to speak and attend Subex’s 2019 User Conference last week (pictured above), but I left Amsterdam feeling dissatisfied in one important regard. Subex is a market leader in supplying telecoms risk management products and services, and they are also a proudly Indian business, as evident by the choice of music that was played for revelers who lingered late at the stunning rooftop restaurant booked for the first evening. However, after allowing for the Indian speakers employed by Subex, the conference agenda featured too many white faces, compared to those with Asian or African ancestry. This cannot be explained solely by holding the conference in Europe, because some of those white speakers had travelled long distances from the USA, Canada and Australia. Other conferences exhibit a similar bias towards white speakers, and perhaps their organizers are guilty of unconscious bias, but Subex are unlikely to share that fault. So why is the leadership of global telecoms risk management dominated by white people?

To reflect on the seriousness of the problem, I would like to begin by making some observations about who spoke at the Subex conference, as nobody complained that its composition was odd, although there were many more Asian and African telcos in the audience than who appeared on stage.

Does the bias towards white speakers influence the work being done to mitigate risk? It is difficult to show evidence, but I believe it has a profound effect. I often hear telco risk managers from developing countries saying they will watch what happens in North America and Europe, then follow their lead, but this becomes a nonsensical approach when Kenyans are far more likely to use mobile money than Germans, and when termination rates mean simbox fraud is far more common in Afghanistan than Canada. Risk managers need to mitigate the risks their businesses currently face and will face in future, not follow some irrelevant roadmap written by men whose only experience comes from working in a completely different market. Suppliers may also be overly influenced by what is being presented on stage, listening too much to the well-articulated requirements of European and North American telcos, but paying insufficient attention to the real needs of telcos elsewhere.

The most overt example of bias at last week’s Subex conference came from a speaker who represents a body that claims to be global, but whose Board of Directors is entirely composed of Americans and Brits. When asked to comment about trends in the way police forces chase telecoms fraudsters, the speaker should have observed it is impossible to generalize on a global level, especially when there are corrupt regimes that imprison honest fraud managers in order to extort money from telcos. We need to be standing side-by-side with telecoms fraud managers who are wrongly accused of crimes, because governments that persist with these tactics represent a threat to law-abiding individuals, to our industry’s ability to recruit and retain good anti-fraud professionals, and to our chances of successfully pursuing international cooperation to fight fraud. However, the speaker said nothing about corruption, or even about the different attitudes adopted by police in various countries. He instead waffled about the work of Europol, seemingly unaware that European police are not representative of the whole world.

People often say collaboration is essential to improving the management of risk, but we limit our chances of success if the voices of white people drown out all others. We need to diagnose the root causes of the imbalance in industry leadership, then address them. Is racism the issue? It may be one of them, though I highlight the imbalance in speakers at Subex’s conference because it illustrates why I feel this is unlikely to be a significant factor. What follows is a brief review of issues we need to address.

English is widely spoken within the telecoms industry, but its adoption is not universal. This means native speakers of the language have a huge advantage. However, no entity has all the resources needed to translate every speaker and every document into every language. We hence need to explore a multi-pronged approach that translates widely-used materials like training courses into a greater variety of languages whilst simultaneously encouraging some key prospective leaders to improve their English language skills.

We also need English-speaking experts from non-white countries like India and Kenya to force their way on stage more often. This will push conference organizers to show more tolerance for regional dialects.

If an international body holds every meeting in the USA then it is no surprise that it will struggle to find leaders who are not Americans. There are barriers to overcome when moving meetings to some non-Western countries, but they can be surmounted. My experience suggests that the greatest obstacle is sloth: Westerners who are used to attending meetings that are conveniently located for them are unwilling to inconvenience themselves by venturing further afield. They fail to recognize how much they will learn by listening to professionals with different perspectives.

Cost is also an issue with travel, but we can reduce the need for travel by making greater use of the telecommunication services our businesses supply. A dual strategy of increased variation of host countries for events whilst making them more inclusive through videoconferencing would greatly expand the pool of talent that inspires and leads our discipline.

The statistics for this year’s Subex conference also illustrate how male speakers tend to dominate. I wrote about our discipline’s gender gap in 2017 and absolutely nothing has changed since. So before we critique how to increase racial diversity, we also need to learn a lesson from our lack of gender diversity. Women are not breaking through as often as they should, but not everyone will want to hear the reasons why. Firstly, suppliers tend not to employ as many women as men. They need to change their policies on recruitment and retention. They also need to encourage more of their women to become confident and overt leaders. Secondly, whilst telcos are much more likely to employ women in relevant roles, those women are far less interested in presenting themselves as leaders to their peers in other telcos.

From time to time I am approached by women who complain of the imbalance between men and women on the agenda of RAG conferences. Instead of making excuses, I always give the same reply: if you can find me women who want to go on stage, then I will give them the opportunity. I have chosen to become steadily more provocative. Why apologize for apparent failure when success can only be realized with the cooperation of women who actually want to succeed?

A similar kind of apathy is apparent whenever a telco manager says they will wait to see what happens in an ‘advanced’ country before deciding whether to emulate the work being done there. That is why I intend to be equally provocative in telling Asian and Afro-Caribbean telco managers that only they can secure greater representation for people like them. It cannot be done by a committee of white men telling each other to do something about diversity!

Some of you may have noticed that I am, in fact, a white man. You might even think I am part of the problem. But I am only interested in one thing: learning from people who do good work. There is no advantage in promoting greater diversity if it means promoting inferior work. What my experience shows is that good work is done by a much wider range of people than is apparent from a typical conference, or by surveying the kinds of people who end up sitting on industry committees.

As a Brit, I was fortunate to do work in revenue assurance before it even had a name, and hence to engage with an innovative niche of professionals sucked into an extraordinarily disruptive market as the number of British telcos exploded following market liberalization. Under the influence of Primeminister Margaret Thatcher, the UK was far ahead in transforming from the old model of a state-owned telecoms monopoly to a vibrant and viciously competitive landscape involving every kind of fixed-line, mobile, retail and wholesale telco. This meant there were a lot of people within range of London who were doing revenue assurance for the first time, and who needed to learn from each other because there was nobody else to learn from. That is the simple explanation for why my nonprofit association, the Risk & Assurance Group (RAG), was founded in London in 2003. But that does not mean Brits must always be the leaders. On the contrary, I expect Africans to lead at managing the kinds of risks they are first to face, and I expect Asians to do likewise. Their telcos now innovate in ways that European and North American telcos do not, so their risk managers must also innovate in response. Asian and African risk managers cannot afford to wait for somebody else to do all the innovation for them.

As the Chief Exec of RAG I can open a door for tomorrow’s leaders, but only they can decide if they want to walk through it, and to accept the burdens that come with leadership. So my commitment is to challenge everybody working in the field of telecoms risk management – black or white, man or woman – to assess whether the best work is receiving the attention it deserves, or whether prejudice and apathy is having a disproportionate impact on the progress we collectively make. Leaders will want to answer that question; others will prefer the status quo.

We must not shy away from making the bold decisions needed to pursue real diversity. RAG started the month of October with a conference in Africa, and RAG’s next conference will be held in Delhi on February 5th and 6th. We will continue to circle the globe, increasing the chances of finding the best work being done on every continent. We are also developing RAG Television so we can interact with leaders from around the world and stream them live to a global audience.

More than anything else, I want more African and Asian professionals to be pushing for a seat on the RAG Steering Committee, though nobody will be appointed solely to meet a quota. They need to show what they can do, not try to impress by skillfully copying others. We are looking for people who want to teach, and to lead by example, no matter what they look like, or where they are from.

Europe and North America represents a small minority of the potential of the human race. Telecoms risk experts living elsewhere should be setting the standards as often as they comply with them. There is only one fair way to push the white guys aside: by proudly showcasing the great work being done by a much wider range of professionals.

Wangiri Fraud: A Light at the End of the Tunnel

US Designates Huawei a Threat to National Security

How can assurance professionals generate the best return from their investment in test call equipment and services? That was the question answered by a panel of experts during RAG’s first virtual conference, held in May. The panelists were: Shahid Ishtiaq of Etisalat, Rémy Eckernkemper of Bouygues Teleco, Xavier Lesage of Araxxe, and RAG’s own Lee Scargall.