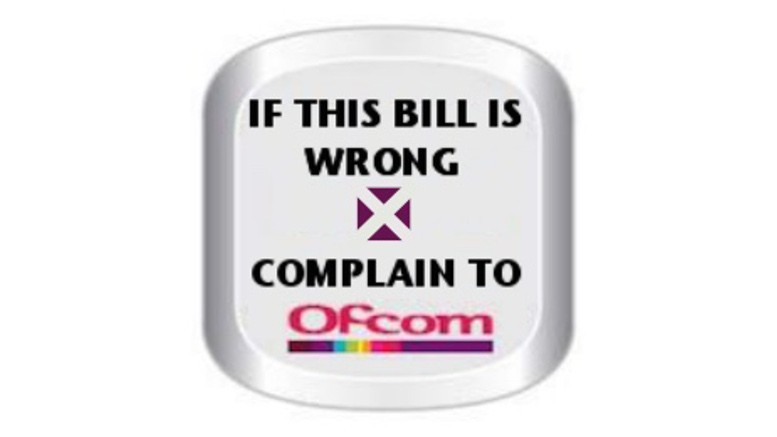 Ofcom, the UK comms regulator, has dropped a plan to promote billing accuracy by allowing their logo to be put on bills which have passed a regulatory audit. This is despite a public consultation where the majority of respondents were in favor of the scheme. What bonkers logic prompted yet another u-turn from the world’s least credible regulator of bill accuracy? They were worried that the logos might influence customers to switch suppliers… but if regulators do not want customers to prefer suppliers who deliver accurate bills, then what are they hoping to achieve?

The consultation received ten responses in total, all from industry insiders or know-nothing semi-governmental committees that are meant to represent the public. Nobody in the actual public seemed to notice this public consultation. Not surprisingly, most of the respondents liked the idea of putting logos on bills. This is because the people responding have jobs that depend on regulations, or jobs that depend on showing how much they love regulations which are meant to benefit the public. However, one telco showed bravery, and stood apart from the crowd. Like they have done previously, Three stated there was nothing to gain by putting logos on bills, because customers simply do not care about the UK’s billing accuracy scheme. I agree with them, and applaud them for continuing to be a lone voice of sanity. Every consumer, everywhere in the world, expects their bills to be accurate. Customers will not thank a telco for doing something they already take for granted.

This is how Ofcom explained their decision to drop the logos:

…if the proposed Approval Logo had the intended effect of providing reassurance to consumers about the accuracy of an approved CP’s [communications provider’s] billing system, it may also potentially deter consumers from using CPs not displaying the logo. This is a matter that would require further detailed consideration.

Hmmm. If this statement is believed, it means Britain’s regulator thought customers might like to use telcos which reassure them that bills are accurate, but later worried customers might not want to use telcos which do not offer the same reassurance. The former is good, but the latter is bad, so now the topic requires ‘further detailed consideration’. Somebody with half a brain might question how much consideration can be applied to a topic that is already blindingly obvious. Either you want customers to discriminate, or not. You cannot have them discriminate-in-a-good-way for telcos that display the logo, without discriminating-in-the-opposite-way for telcos that do not. That is what the word ‘discrimination’ means. And if you do not want customers to discriminate, then you have no reason to provide them with information in the first place. How could Ofcom make their proposal, without immediately reaching this inevitable conclusion?

However, I believe Ofcom had very different reasons for dropping this promotional gimmick, and they have nothing to do with regulating telcos, or protecting consumers. As daft as Ofcom are, the people working there are not as stupid as they often appear. They do not want a scandal, and they do not want to be sacked. Putting logos on bills would not just draw attention to which telcos have passed an audit, it would also draw attention to the existence of the audit – and as Three have consistently and correctly observed, the public is not aware of these audits. If the public notices these audits, they will soon notice how truly lousy and ineffective they are, and that would cause plenty of headaches for Ofcom. That was the point I made, with my joke redesign of Ofcom’s proposed logo (pictured above).

The UK’s billing accuracy regulation can float on, with nobody rocking the boat, because the public never notices it. But if members of the public became aware of this regulation, and then found errors on their bills… even Ofcom can predict what would happen next. The numbers of upheld complaints about billing have always been completely out of line with the levels of accuracy supposedly demonstrated by the regulatory audits. This year has seen very high levels of complaint about Vodafone bills – even though Vodafone has passed every audit of their billing accuracy.

People whose jobs depend on doublethink may persuade themselves the UK billing accuracy audits are working well, but they also convinced themselves of other ludicrous rationalizations, including the idea that having objective targets for accuracy encourages telcos to make mistakes, so scrapping the targets will improve accuracy and that this supposed toughening of the rules was also, simultaneously, a relaxation of the rules. But whilst people can be paid to believe such paradoxical nonsense, the general public will not. Ordinary customers will complain when they receive bills that are obviously wrong, and if they discover the bill has been audited, they will complain about both the bill, and the audit. And if they did that, then Ofcom will have to stop pretending that the audits serve any useful purpose, and admit to mistakes that were made in the past. But that would also cause trouble for employees of Ofcom, so their preferred approach is to keep saying the purpose of the audits is to boost customer confidence, whilst hoping customers remain unaware of them!