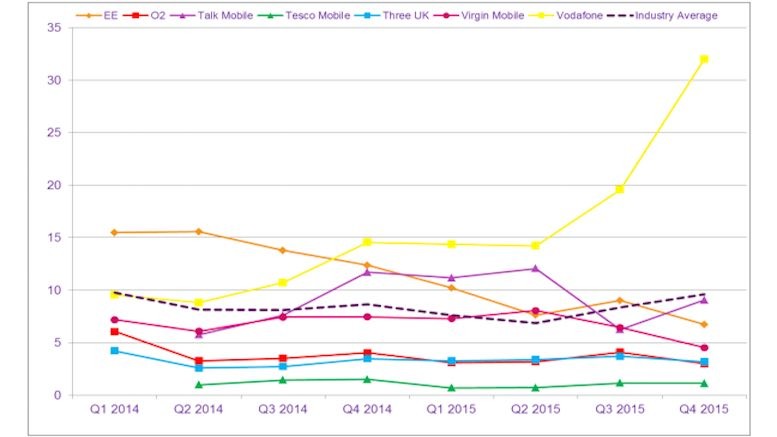 Anyone who reads Commsrisk on a regular basis would notice I have been writing a lot about Vodafone UK and the complaints made by its postpaid customers. For well over a year the UK regulator, Ofcom, has received more complaints about Vodafone than any other UK mobile provider, and billing accuracy has consistently been the top driver of those complaints. Ofcom stats show the number of Vodafone complaints keeps rising, but their year-long investigation into Vodafone billing errors was recently wound up after taking no action whatsoever. So you can imagine my surprise that the latest quarterly complaints data shows Vodafone not just smashing all records for postpaid mobile complaints with a 60 percent rise since the previous quarter, Vodafone are now generating more complaints for the regulator than the rest of the UK mobile postpaid industry put together.

Ofcom’s report once again cites ‘billing, pricing and charges’ as the top reason for Vodafone complaints. Let me reiterate that this should be shocking – it is rare for a telco to have more complaints in this category than any other. But billing has been the top cause of Vodafone complaints for well over a year. And whilst the description of this category is deliberately vague, everybody knows what causes a surge of complaints like this: customers believe they have been overcharged.

To read Ofcom’s report you might think that nothing unusual was going on. This is their laissez-faire description of what should be treated like a crisis:

…Ofcom continued to receive the most complaints per 100,000 subscribers about Vodafone… All other providers… generated relative complaint levels that were below the industry average.

I have no idea why Ofcom bothers to write this insipid analysis, when anyone who can read a graph can obviously see the truth of this assertion. What Ofcom should be commenting on is how Vodafone slipped so badly that they generate three times the number of complaints they did in 2014, before their widely-publicized problems with a billing system upgrade. Vodafone UK CEO Jeroen Hoencamp wrote in May 2015:

We are also conducting a major upgrade to our IT billing system which, once the highly complex migration exercise has completed later this year, will allow us to offer customers industry-leading price plans and services.

And after Ofcom terminated their futile ‘investigation’, Vodafone’s spokesperson commented:

We are pleased that Ofcom has concluded this investigation into our billing procedures and has concluded that we have established processes and procedures in place to actively monitor billing issues, when they occur, and to fix them in a timely manner, including taking appropriate remedial action, where necessary.

So if everything is going so well, why is Vodafone generating even more complaints than before?

This entire fiasco stinks of complacency from both Vodafone’s management team and the UK regulator. Let us be frank: neither of them care if customers get overcharged, because none of them are losing their jobs as a result. It suits them both that there are no negative headlines in the press, and they get away with it because telco customers expect to be treated badly. Stories about overbilling are so common that they only make the news when they are extreme. The UK regulator is more interested in talking down issues (and hence talking up what a great job it does) than in actually protecting customers, and that means nobody is holding brazenly incompetent managers to account.

Worst of all, rival telcos must wonder why they bother to do a good job, if Vodafone can get away with this kind of behavior for so long. Actions speak louder than words, and a rational business person should infer that Ofcom’s lack of action means there is zero regulatory pressure to improve the accuracy of bills before they get sent to customers. Ofcom obviously thinks it is sufficient for bills to be ‘fixed in a timely manner’ after they have been issued, even if customers do not agree with Vodafone’s definition of ‘timely’.

No doubt the number of complaints will fall when Vodafone’s flatulent management team finally gets a grip on their internal problems. And at that time, Ofcom will pat itself on the back, and pretend it was their vigilance that drove those improvements. But these figures tell a different story. Ofcom can find no evidence of anything going wrong with Vodafone’s billing even whilst Vodafone customers complain to Ofcom in record numbers. That makes me wonder what, if anything, the UK regulator thinks it accomplished during their year-long investigation of Vodafone billing.