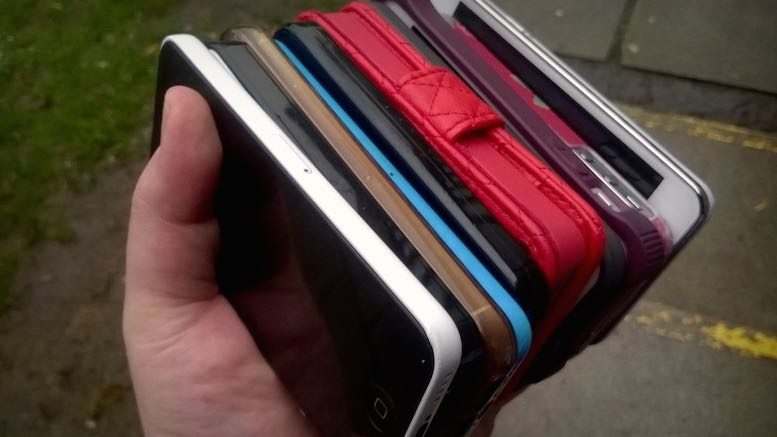 Citizens Advice, a network of UK charities that helps people with financial and legal issues, has blasted UK mobile providers Vodafone, EE and Three for overcharging customers. Their complaint focuses on contracts where the cost of a new handset is incorporated into the monthly rate, because the telcos do not automatically lower the rate when the fixed term of the contract has been completed. Per their press release:

New analysis from Citizens Advice finds customers of Vodafone, EE and Three who choose to stay on the same phone plan after the fixed deal ends do not get their bills reduced – meaning customers are paying on average an extra £22 a month for a phone they have already paid off.

The extra cost can be as much as £38 a month on average for contracts with high-range handsets like the iPhone 7 128/256GB, the Galaxy S8 and the Xperia XZ Premium.

For the iPhone 8 separate analysis from Citizens Advice finds that customers with a 256GB model could end up being overcharged by £46 a month on average.

They have a point. These telcos do keep charging the same amount after the end of the fixed term of the contract, even if the customer chooses not to upgrade their handset. However, Citizens Advice are guilty of bad practice by presenting their conclusions without showing the detail of the research they have performed. So whilst their claims have a ring of truth, it is not possible to independently validate their research. Presumably they looked at the tariffs for contracts involving particular handsets and compared them to SIM-only deals, but the lack of detail means we have no way of confirming the deals are genuinely equivalent.

Whilst Citizens Advice are correct to observe customers will pay more than they have to if they fail to switch to a SIM-only deal as soon as they can, it is not so clear what is meant by asserting a handset has been ‘paid off’. Without looking at prices in more detail, we do not know if the telcos may also be charging a different effective price for handsets supplied as part of a contract. And that effective price might be higher or lower than the amount charged to other customers, whether including or excluding a fair interest charge for allowing the customer to spread the cost of purchasing the handset.

A common sense solution was proposed by Citizens Advice:

To make it clear to the consumer when they have paid off the cost of the handset in a contract, the national charity is calling for mobile phone companies to separate out the cost of a handset from the cost of mobile phone services. Displaying these costs separately when advertising the contract would also enable consumers to compare the price of contracts more easily.

However, the devil is in the detail when demanding solutions that sound as simple as this. What sounds ‘easy’ to somebody writing a press release may not reflect what real people do in practice. A proper comparison would involve breaking out the cost of the handset, the cost of the service being offered, the interest charge on the handset, and the specifics of the service being offered (such as the number of inclusive minutes). Add the fact that different handsets have different capabilities and your ‘easy’ comparison will soon look like a jumble of numbers that most customers will not spend time wading through. Enforcing some standards could help; for example, providers of financial services are often compelled to present interest costs according to a common format that simplifies the task of comparing the offerings of different firms. But even so, plenty of people would not take notice, and Citizens Advice ducked the challenge by not explaining the level of detail they would consider sufficient for customers to ‘easily’ compare deals.

It is clearly unfair that some phone providers are charging loyal customers for handsets that they have already paid for. It’s especially concerning that older customers are more likely to be stung by this sharp practice.

But part of the problem with older customers is that some would not be aware of how much money they waste on equipment, even if the costs were spelt out to them. Many older BT customers continued to rent their fixed-line handsets from the former monopoly provider decades after market liberalization allowed them to buy a phone from a high street shop for a fraction of the amount they gave BT. None could say BT were hiding the truth from their customers; those handset costs were listed as ‘equipment rental’ on BT bills. Consumer confusion still continues to this day. Earlier this year, the nephew of an 88 year old BT customer complained that she had been ‘overcharged’ for the purchase of a new handset although the bills clearly described the charges as rent.

Politicians rarely pass up an opportunity to show how much they care if it costs them no money or effort, so Digital Minister Matt Hancock waded into the row started by Citizens Advice and grabbed himself some press coverage. I would quote what he said but you can imagine the empty guff for yourself.

UK telcos should consider themselves lucky that politicians are not more proactive. Bashing unpopular telcos is a cheap way to win votes, as illustrated by the European Union’s struggle to list accomplishments that do not involve setting prices for phone calls. Customers are lax, and that makes them easy to exploit. But continued exploitation leads to resentment, and when a supplier loses trust they will find that winning it back comes at a higher price.