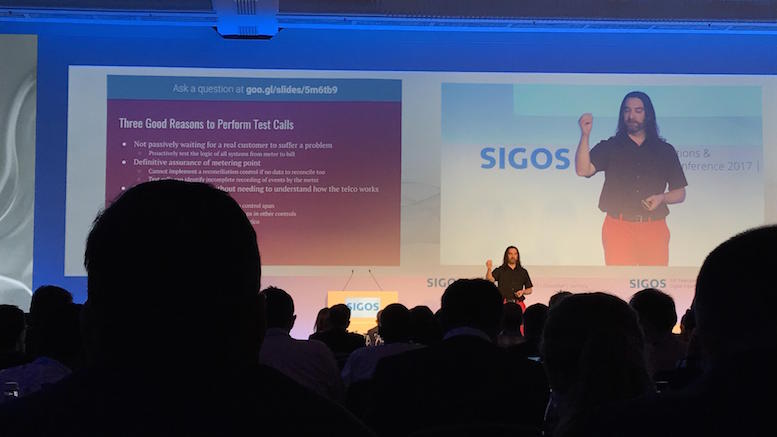 Today it is my privilege to speak at the 20th SIGOS Conference for Telco & Digital Experience, where the hosts have asked me to talk about the relationship between the assurance of revenues and the management of the customer’s quality of experience (QoE). I know this will be a top-notch event, having been fortunate to participate last year (pictured). SIGOS’ conference draws a large and varied international audience including network engineers, accountants and regulators. What they have in common is the awareness that performing tests from the customer’s point of view provides objective data about how well the business is doing. However, that does not mean they always find it easy to work together, as illustrated by an anecdote from my own career.

Many years ago I worked at a telco that had need of both a system to check the network’s quality of service and a system to check the accuracy of records used for billing. An obvious opportunity arose: why not save money by purchasing a single system to perform both kinds of test? The root of each test is common: a machine makes a call to another machine. The difference is the data being gathered and the use made of that data. So the network engineers and revenue assurance team hatched a plan for a jointly-specified system that would address both sets of requirements without needing two sets of equipment and two budgets for capital expenditure to be spent on two different suppliers creating twice as much integration work for our single telco. All was going well until the day we needed to obtain approval for the capex. That morning the network engineers decided they had other priorities which ranked higher than QoS testing, and should not put those projects at risk by asking for too much at once. So they decided not to attend the capex board that day. That left me going single-handed to a meeting of the most senior managers in the telco, explaining to them why they should buy a system that would mostly be used for QoS testing whilst also doing some revenue assurance tests, and why the combination represented good value for money. Not surprisingly, the CTO noted the absence of anyone from his function, and the board declined to purchase the combined system, despite the theoretical cost saving.

There are many telcos who buy systems that largely duplicate each other in important respects. Such decisions will keep being made so long as telcos have multiple separate teams with competing interests even though the teams all belong to the same company. Nevertheless, I would argue the silo mentality exhibited in telco decision-making is becoming more dangerous all the time, because the customer’s perception of the service they receive is more holistic than ever before. Think of a customer subscribing to a tariff which gives them unlimited data for music streaming services like Spotify or SoundCloud; how pleased will they be with their tariff if network problems mean their favorite songs keep being interrupted? Or consider a mobile customer purchasing an add-on bundle where they receive extra data for use with Whatsapp. If network quality is so poor they cannot make Whatsapp calls as intended then they have not received the value they paid for, even if the add-on is billed ‘correctly’. Note here that the issue may not even be with the subscriber’s own network. Ultimately customers pay for a service, and they experience a connection between what they pay and the service they receive, even if our siloed businesses fail to join the dots.

Those are some of the reasons I am passionate about managing risk by objectively understanding how well the telco is delivering the promised services, from the customer’s perspective. One way to do that is to wait for customers to tell you about your service – perhaps by complaining or demanding a refund. A better approach is for telcos to get ahead of the customer, and to experience the service through the automated equivalent of the customer’s eyes and ears. Research about customers and their behavior also supports this argument. For more, take a look at the slide pack for my presentation at the SIGOS conference, which is shown below.