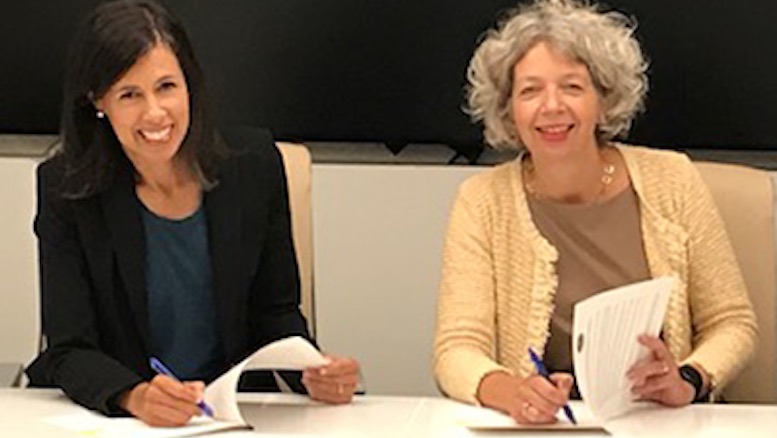 Last week Annemarie Sipkes (pictured right) of the Body of European Regulators for Electronic Communications (BEREC), an agency of the European Union, and Jessica Rosenworcel (pictured left) of the US Federal Communications Commission (FCC) signed an agreement that says their organizations will cooperate on this-and-that, following a tradition of previous agreements reached in 2012 and 2018. Now see if you can spot the difference in how the FCC and BEREC described the contents of their latest Memorandum of Understanding.

Here is the FCC tweet to announce the deal:

#ICYMI Chairwoman @JRosenworcelFCC has announced the signing of an updated Memorandum of Understanding with @BERECeuropaeu that expands their current partnership, with a new focus on combatting unwanted #robocalls and the promotion of #5G, #6G, and beyond. https://t.co/sk1rPP94XH

Here is the BEREC tweet to announce the same deal:

During the @BERECeuropaeu study visit to the US, the #BEREC Chair Annemarie Sipkes and the @FCC reconfirmed their ongoing partnership by signing an updated version of their Memorandum of Understanding.🥳

This is what the deal covers per the FCC press release:

This is the list of topics covered by the deal per the BEREC press release:

Did you notice that there were only five topics per BEREC’s list, compared to the six on the FCC’s list? The two descriptions are word-for-word identical until it is time to mention robocalls. BEREC, despite signing this deal, seemingly decided it was not even worth mentioning the inclusion of robocall mitigation amongst the subjects where they expect to learn from (or be schooled by) the FCC.

The FCC says this agreement demonstrates a “new focus” on tackling robocalls, but that is obviously not a topic that the EU’s regulators are focusing on, or else they would have mentioned it!

Most American journalists are far too lazy to check details like these; they will simply repeat whatever the FCC tells them about international cooperation. However, the exclusion of robocalls from the BEREC press release is important. Regulators are political appointees and they care about the issues that matter to their political masters. They seek to sway public opinion. The USA is worried about 5G and 6G because there are no big US manufacturers of RAN equipment; this also explains why Open RAN is so often mentioned by their politicians, even though it will not help them close the gap with the big suppliers in Europe and China. Robocalls also matter to US politicians because they upset so many US voters. In contrast, more European politicians are worried about broadband access, speed and cost, which is why those themes were emphasized in BEREC’s description of the same deal.