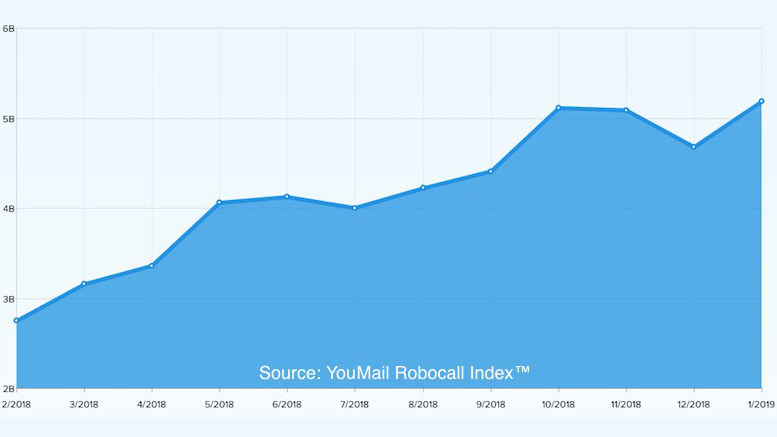 Last year Commsrisk kept telling the story of how a rising tide of automated marketing calls – otherwise known as robocalls – is plaguing US consumers, despite the best efforts of American telcos and their regulator, the Federal Communications Commission (FCC). At the end of April the YouMail Robocall Index breached 4 billion robocalls per month for the first time. It remained around this level for a few months and then started rising again, with the 5 billion mark breached at the end of September. It then fell for a couple of months, but the first month of the new year set a new record of 5,185,933,900 robocalls. That means there were 15.8 robocalls during January per each American.

Robocalls continue to generate an overwhelming number of FCC complaints, and the subject attracts the attention of American politicians. In November FCC Chairman Ajit Pai wrote letters to congressmen Michael Burgess (R-TX 26th District) and Bob Goodlatte (R-VA 6th District) addressing their concerns about a legal interpretation of the Telephone Consumer Protection Act (TCPA) that has put businesses at risk if they call customers documented in their files, but who have since had their phone number reallocated to a different person, resulting in somebody else receiving an unwanted call. Now the FCC is pursuing the creation of a central number database that will address this problem by responding with either a “yes”, “no” or “no data” to queries about whether a phone number is still assigned to a particular user. You find out more about the plans for a central number database from here.