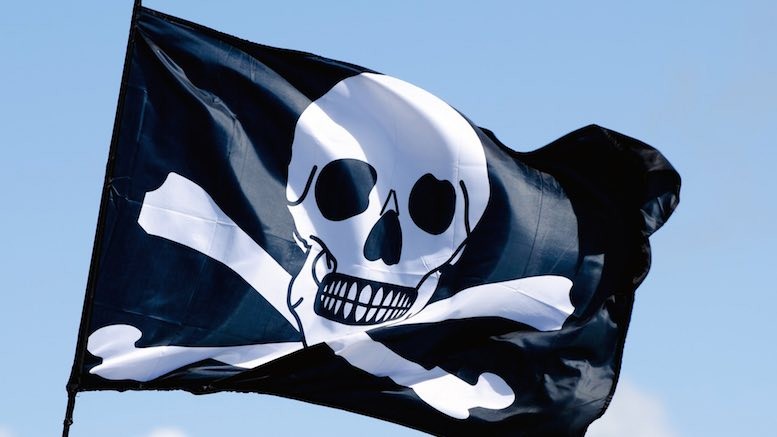 The problem with writing about the piracy of video content is that half the people googling ‘pirates’ are actually looking for the kind who sail ships and steal from other ships, not the kind who infringe copyright by sharing content over the internet. So this article could get a bit confusing; it is about the US state of North Carolina changing an anti-piracy law so it could use the internet to copy and share somebody else’s documentary videos… which happen to be about pirates of the nautical variety!

Rick Allen is a photographer and videographer, and he is currently pursuing a copyright infringement claim against the State of North Carolina. Allen has spent years creating images and video footage of the pirate Blackbeard’s sunken flagship (The Queen Anne’s Revenge), which was run aground at Beaufort Inlet, North Carolina. The photographer seems to have had a career almost as colourful as Blackbeard’s; the complaint introduces him as the man who…

…has followed SWAT teams through the door on drug busts, traveled from Cuba to Kazakhstan with the 82nd Airborne, weathered live broadcasts during hurricanes, gone nose to nose with 14 foot Great White sharks during underwater expeditions and for nearly two decades has been the project videographer on the Queen Anne’s Revenge Shipwreck Project.

…produced a substantial archive of video and still images showing… the efforts of teams of divers and archaeologists to recover various artifacts from the wreck.

The legal complaint says that Allen owns the copyright in these materials (which are licensed to and commercialized by Nautilus).

The disagreements began in 2013, when North Carolina’s Department of Cultural Resources (DCR) uploaded some of Allen’s video footage online. Allen complained that this infringed several of his copyright registrations and was apparently vindicated, as the State agreed to pay USD15,000 compensation for copyright infringement. The latest complaint says that North Carolina’s state officials and the DCR continued to infringe Allen’s copyrights after the settlement agreement, uploading several more YouTube videos (including one entitled ‘Raising Blackbeard’s Anchor’).

And here is where the plot thickens. North Carolina state officials are accused of attempting to avoid a second copyright infringement claim by changing the law:

Defendants well knew or should have known that only Congress has the right to pass laws governing copyrights, yet conspired to craft and obtain passage of a North Carolina statute, N.C. Gen. Stat. §121-25(b) that removed Plaintiffs’ works, and those of similarly situated persons, from the copyright protection to which they are entitled.

The relevant and suspiciously specific section of the North Carolina statute reads as follows:

(b) All photographs, video recordings, or other documentary materials of a derelict vessel or shipwreck or its contents, relics, artifacts, or historic materials in the custody of any agency of North Carolina government or its subdivisions shall be a public record… There shall be no limitation on the use of or no requirement to alter any such photograph, video recordings, or other documentary material, and any such provision in any agreement, permit, or license shall be void and unenforceable as a matter of public policy.

How often does the defendant in a copyright infringement claim try to change the law to escape liability? Even if the law survives, it would seem odd if it applied retrospectively to infringements committed before it was passed. If Allen has got his facts right, it looks like the State of North Carolina may have to reach into its pockets and shell out a substantial proportion of Blackbeard’s gold to make amends.

The original version of this article was posted on the IPKat by Nick Smallwood. It has been reproduced under a Creative Commons CC BY 2.0 UK Licence.