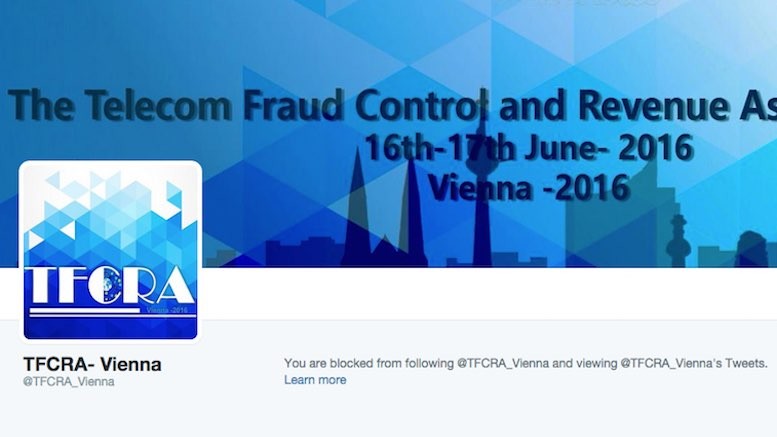 If you were planning to fly to Vienna to attend the Telecom Fraud Control and Revenue Assurance Forum on June 16th and 17th, you may want to think again. As far as my spies can tell, that conference no longer exists. Quintus, the blaggers who claimed to be organizing this “excellent opportunity to learn from peer experiences” have still left their conference website up, if you want to give them your email address and receive spam in return. I would share the website’s URL with you, but that would be irresponsible. Instead, I will make fun of all the things you will not find there, including:

The conference has been disappearing from social media too. There used to be a dedicated LinkedIn group, but when I now follow the link from the conference website, LinkedIn tells me:

Sorry, this group doesn’t exist. You might have the wrong URL or this group’s manager may have deleted it.

On the other hand, their official Twitter account still exists. Although they only ever tweeted twice. So given the low volume of tweets, I wonder why they blocked the Commsrisk twitter account. I took a screenshot so you could see; it is pictured above.

What is the moral of this sorry story? I think there are several. Firstly, people who run reputable RAFM conferences have nothing to fear; people who try to hide their tweets from Commsrisk are probably up to no good. Secondly, only a nincompoop tries to launch a new conference using nothing but a website and LinkedIn whilst thinking they can control who will check what they are doing. Many of us have telephones and some of us even know the numbers of other people. Finally, blocking people on Twitter is a totally ineffective way to stop them reading your tweets. The whole point of Twitter is to promote yourself in a public space, and it was not like I was going to retweet them anyway!

This leaves me wondering one thing: did anyone pay to attend? The conference fees were never publicly stated either. Past experience shows that event organizers like this may charge thousands of dollars to unsuspecting telcos. I do hope nobody was tricked into paying money for an event that will not occur.

Let me extend an offer to every telco that wanted to attend the TFCRA event. Sign up for the RAG Summer Conference instead, and you will get in for free! (Actually, the RAG never charges anybody to attend their events, which helps to explain why the RAG Summer Conference has over 30 confirmed speakers, 10 sponsors, and a 170-seat venue, but few unallocated seats left.)

Some of you may question the impartiality of this article. But what would you prefer? Big education events that have speakers, sponsors, attendees, a venue, yet no charge for attendance? Or would you rather pay big fees to visit forums with no speakers, no sponsors, and nobody else in the audience? I know which approach I think is better. If that makes me biased, then so be it! The number of registrations for the RAG Summer Conference tells me that many agree.