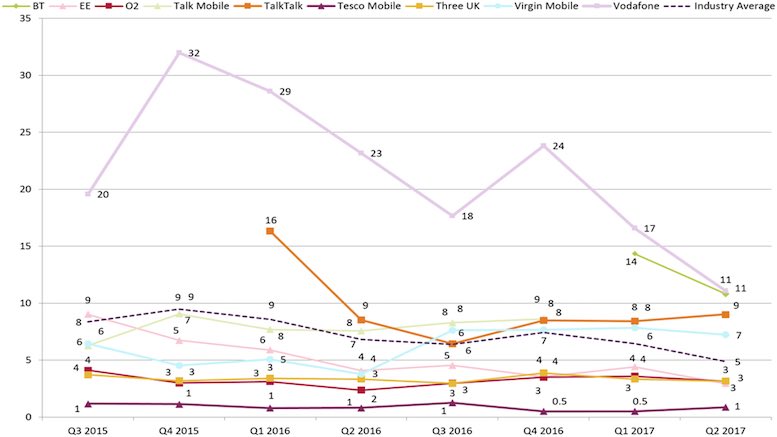 Ofcom, the UK regulator, can breathe easy. It only took 11 successive quarters for Vodafone billing complaints to fall to the level when they were not significantly worse than those of every other UK mobile provider. Perhaps some of the staff working at the regulator will be congratulating themselves that their tough stance on billing accuracy regulations spared some Vodafone customers another two-and-a-half years of incorrect bills.

BT might console themselves that they have only had lousy complaint statistics for two quarters in a row, because that is as long as they have been offering a postpaid mobile service that Ofcom has needed to monitor. Vodafone has many more years of experience of upsetting customers.

Once in a while Ofcom will change the way their complaints metrics are produced, without warning or proper explanation. Presumably they do this to make it even harder to interpret what little data they share with the public. The innovation in this quarter was that Ofcom has added a new category when classifying the complaints they receive. As a consequence, their report gave the following explanation for what causes Vodafone and BT customers to complain:

I suspect this new category – complaints about complaining – is a way of breaking up the category that was causing most embarrassment for Vodafone and Ofcom. In the 10 previous quarters the top cause of Vodafone complaints was ‘issues around billing, pricing and charges’, which is a euphemism for ‘billing errors because Vodafone screwed up a migration to a new billing platform’. Obviously some of those complaints involved customers who were not just inaccurately billed, but whose subsequent complaints were not taken seriously. Splitting the categories means that Ofcom can pretend that incorrect billing is no longer the root cause of so many complaints, because they can assert the customer is complaining about complaining, and has presumably lost interest in the fact that their bill is wrong.

You can obtain Ofcom’s latest complaints report here, but you will learn nothing by reading it, which is exactly what Ofcom wants.