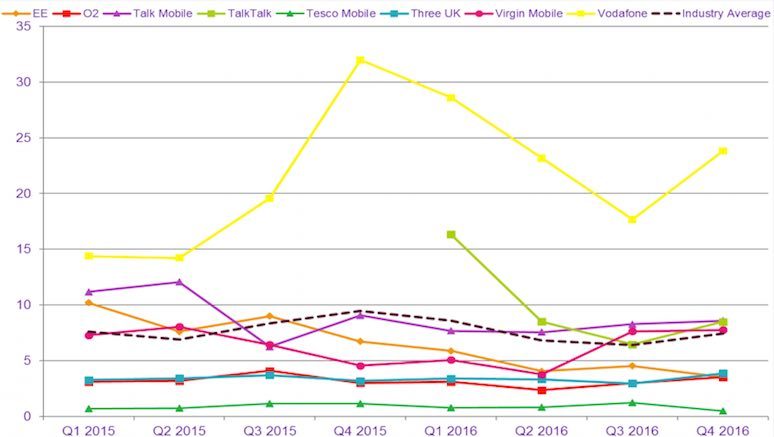 UK comms regulator Ofcom has published their complaints stats for Q4 2016, and Vodafone UK continues to top the tables for postpaid mobile providers. This is the ninth quarter in a row that Vodafone has generated levels of complaint that were previously unprecedented. As with previous quarters, the leading issue was ‘billing, pricing and charges’, which is Ofcom’s opaque way of saying Vodafone has an ongoing problem with overbilling customers following a botched billing migration.

The increase in Vodafone complaints per 100,000 subscribers in Q4 2016 was affected by a spike in complaint numbers following the news, published in October 2016, that Ofcom had fined Vodafone for mis-selling, inaccurate billing and poor complaints handling procedures.

That begs a question. Why is Ofcom misrepresenting the punishment they gave to Vodafone? Here is the description of the fines issued by Ofcom in their own words, with my added emphasis:

One investigation found that 10,452 pay-as-you-go customers lost out when Vodafone failed to credit their accounts after they paid to ‘top-up’ their mobile phone credit…

Vodafone also breached Ofcom’s billing rules, because the top-ups that consumers had bought in good faith were not reflected in their credit balances.

In a second investigation, we found that Vodafone failed to comply with our rules on handling customer complaints.

Ofcom is trying to argue that a penalty they issued for prepaid mis-selling and charging errors is the explanation for a rise in the number of postpaid customers who found errors with their bills.

Contrary to the misleading footnote in their report, Ofcom has never issued any penalty for Vodafone’s numerous postpaid billing errors, even though the complaints data makes it obvious that Vodafone has, and continues to have, a huge problem with the accuracy of bills. The only fine relating to treatment of postpaid customers was given because of Vodafone’s failure to handle their complaints properly – although the reason Vodafone was overwhelmed with complaints was because so many postpaid customers were unhappy with their bills!

…based on our assessment of the number of customers affected, Vodafone’s processes for correcting errors through amending subsequent bills and the monetary value being taken from the customer’s account, the level of harm actually incurred by customers appears to have been relatively low.

I talk off-the-record to staff responsible for billing accuracy in other UK telcos, and it has become clear they are increasingly fed up with the Ofcom’s inconsistent behavior. Consider the following:

You can find the complete Ofcom Q4 2016 complaints report here.