Complaints data from Ofcom, the UK comms regulator, has reinforced recent stories about dissatisfied Vodafone customers. Between January and March, Ofcom received more complaints about Vodafone than any other British mobile pay-monthly provider. There were 0.14 complaints per every 1,000 Vodafone customers, almost double the industry average of 0.08, and only a slight improvement on Vodafone’s tally in the previous quarter. 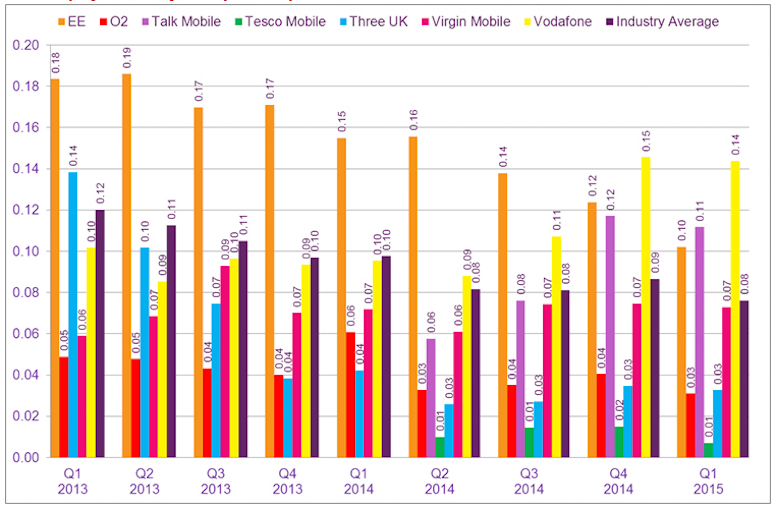 Crucially, most Vodafone complaints related to billing, pricing and charges. 33 percent of the complaints from Vodafone customers belonged in this category. Regular followers of the UK regulator’s complaints data will know that billing and charging are often a major driver of complaints, but they are rarely the top cause for any provider.

Vodafone’s difficulties have led to two separate Ofcom investigations. On June 11th, Ofcom announced an investigation into Vodafone billing accuracy and complaints handling. A second announcement was issued the next day, saying Ofcom was investigating if Vodafone prepay customers were charged for services they had not received.

Vodafone UK CEO Jeroen Hoencamp alluded to the need to make improvements in a corporate blog dating May 12. Responding to the increase in complaints during the last quarter of 2014, he stated:

We’re disappointed that more customers needed to raise complaints with us in the second half of last year… This Ofcom report serves to remind us that we need to do more to deliver our goal of providing the best customer experience in our industry.

We’ve taken significant action over the last six months to improve our customers’ experiences: we’re continuing to invest massively in modernising and building extra resilience into our network; and we’re significantly increasing the number of customer service agents and improving their training. We are also conducting a major upgrade to our IT billing system which, once the highly complex migration exercise has completed later this year, will allow us to offer customers industry-leading price plans and services.

I do not find this kind of statement to be reassuring. Hoencamp emphasized that: “everything should just work”. That is not just a general-purpose slogan. Accurately billing customers is a moral and legal duty. When it comes to charging people the right amount, wanting to improve is an admission that current performance is inadequate.

It is not surprising that telco executives may take a lax attitude to billing accuracy, because regulators hardly ever punish telcos for overcharging customers. Usually comms regulators are satisfied if a telco eventually reimburses the customer, as if overcharging and then correcting the error should be considered normal practice, even though this is obviously not the case in most industries. At other times, it is up to customers to seek redress through the civil courts, whilst regulators stand idly by and do nothing. Ofcom has just announced EE will be fined GBP1mn (USD1.55mn) for repeatedly failing to advise customers about their right to appeal the handling of complaints to an independent arbitration service. If a similarly large fine was ever imposed on a telco for overcharging customers, that would motivate a surge of investment in improved controls and assurance.

Some Vodafone customers feel they have been made to pay more than they should have. It is disrespectful to respond to their complaints with inane chatter about ‘improving customer experiences’. The amount that is charged is either right or wrong. The goal must always be to charge the right amount, and not a penny more. That leaves no room for improvement. Either Vodafone should issue charges that are right, or they should not issue charges until they know they are right.

Sadly, Vodafone UK’s complacent attitude to billing and charging accuracy is not a new phenomenon in this industry. But then, neither are customer complaints, and the enormous amounts spent on handling those complaints and pacifying unhappy customers. Consider the typical telco’s budget for call centers, and compare that with what they spend on verifying bill accuracy. It is easy to see why telcos repeatedly get charges wrong, outraging customers as a consequence. This year, Hoencamp promised to spend GBP£1bn (USD£1.55bn) on improving Vodafone’s network and customer experience. Imagine how little of that would be needed to confidently verify that no customer was ever overcharged.