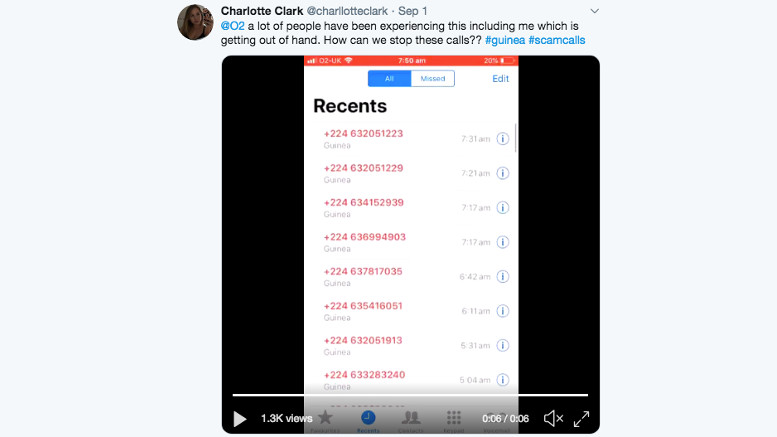 A burst of wangiri calls, mostly originating from African countries, made headlines in the UK this weekend. The attacks generated a series of complaints from subscribers of EE, the mobile arm of BT, and O2, Telefónica’s mobile brand in the UK; other networks were seemingly unaffected. Customers were particularly upset because they received repeated calls from slightly different originating numbers, making the blocking features on their phones irrelevant. Some victims said they received 50 or 60 wangiri calls during Saturday and Sunday.

The Sun, which is the best-selling newspaper in Britain, reported this account of what happened to one victim:

One O2 customer… told The Sun: “I started receiving calls from random numbers from Africa and they kept happening every five minutes. I’d started to block the number but then each time they would call from a different line. When I called O2 it said it had hundreds of customers ringing about the same thing.”

Play the video in the following tweet to see how one customer was plagued by calls from different originating numbers in Guinea.

@O2 a lot of people have been experiencing this including me which is getting out of hand. How can we stop these calls?? #guinea #scamcalls pic.twitter.com/lu4FjZllTU

However, the scale of the attack may have been exaggerated by journalists who recycled the social media posts of a relatively small number of badly affected consumers. The Daily Mail, another popular British newspaper, quoted EE as saying 50 customers “at most” had been targeted by the wangiri fraudsters.

Telcos played down wild speculation about data breaches, as they should. Wangiri fraudsters are perfectly capable of calling numbers at random, without knowing who will receive them. However, it was disappointing to see that EE were less than completely truthful about the ‘work’ being done to protect customers from wangiri.

This is an industry-wide issue and as these calls come from outside the UK it makes tracing them extremely difficult – and is why Ofcom is working with the GSMA and The Internet Engineering Task Force to try to address this globally.

The mention of the Internet Engineering Task Force suggests this is a reference to industry discussions about CLI spoofing and the tracing of nuisance VoIP calls, rather than being about wangiri per se. A more honest answer from EE would have admitted those particular discussions have been going on for years, as illustrated by a 2013 statement by Ofcom, the UK telecoms regulator, and ICO, the UK data protection authority:

Improvements… should make it easier to identify traffic with spoofed CLIs and opens up the potential to exclude such traffic in the future. However, the solution will need to be adopted widely on a global scale. Ofcom will monitor this work and, in conjunction with industry, investigate how and when the IETF’s recommendations can be implemented and their effectiveness.

This year is 2019, and we are all still looking forward to the version of the future where technology like this will deliver an appreciable reduction in wangiri. Meanwhile, the worldwide increase in the number of wangiri warnings shows that effective solutions are needed more urgently than ever before.

Ironically, in the last few weeks the Risk & Assurance Group (RAG) has seen a heartening surge in the number of telcos and other businesses expressing an interest in the RAG Wangiri Blockchain, a mechanism that would allow telcos to easily share data about wangiri attacks so they can be blocked more rapidly. Telcos can use the blockchain without charge, begging the question about why some of them are telling customers they are waiting for the delivery of solutions proposed years ago instead of engaging with the very latest technology that is already up and running.

It is a sad truth that some people who supposedly work in the field of international collaboration are actually more motivated to compete with each other. The RAG Wangiri Blockchain can greatly reduce the number of wangiri calls that customers receive by pooling the data of rival telcos like EE and Telefónica. Sharing this data means they can block the relevant ranges by analyzing the attacks suffered by customers of other telcos, instead of waiting to receive complaints from their own subscribers. The fraud team in Vodafone Group is already a user of the RAG Wangiri Blockchain, so what stops competitors like Telefónica from following their lead? The sooner every telco shares their wangiri data, the sooner they will collectively reduce wangiri fraud and the fewer excuses they will need to make to customers.