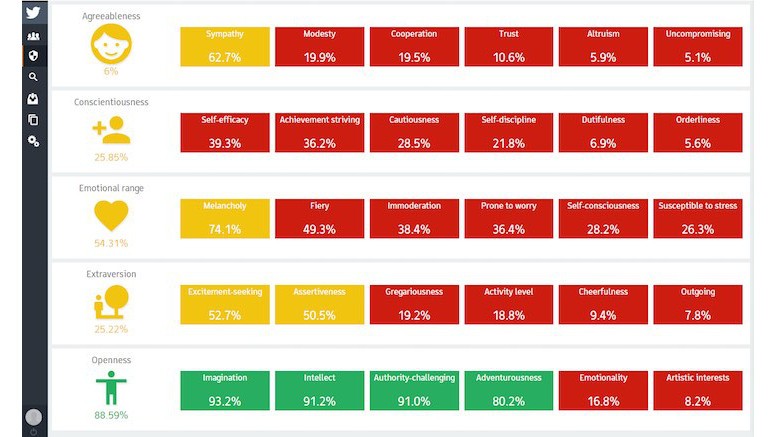 A funny thing happened to me a while ago. Some software read all my tweets and blogs, then told me I am an imaginative, intelligent guy who challenges authority, likes adventure, is sympathetic and a bit melancholy. And why did it do this? Because automatically profiling personalities will be increasingly used by telcos, and other businesses, to understand how to identify and treat customers, and to manage the risks they pose. And because Portuguese vendor WeDo expect this will be a service that their customers will want to purchase.

Luckily for me, WeDo’s automated analysis said I represented a low degree of risk… though I am sure some people would disagree with that assessment. What was stunning about the demonstration was that it was based solely on information publicly available on the internet. Of course I have written more web content than many people, but in future everybody will have put a lot more of themselves on the web. Whether you use Twitter, Facebook, LinkedIn or any other social network, every year you reveal more about your personality to the faceless technologies of the internet, as well as to the people you connect with. Young people live their lives on the web; the first generation that will be automatically profiled from cradle to grave is already alive today.

WeDo’s demonstration begins with a simple seed, in my case because I posted a tweet using a specific hashtag that WeDo was monitoring. Having identified my Twitter account as being one of interest, they then collated all the data they could from web based sources. The emotions in my tweets were evaluated by a variant of the famous IBM Watson, processing the natural language to gauge my sentiment. As a result I was given scores on various scales relating to joy, fear, anger etc. Meanwhile all my social media profiles were aggregated and the Tensorflow machine intelligence software was used to classify any associated images – such as identifying photographs of my face. IBM Watson simultaneously went through the verbal content of my social profiles and calculated how ‘risky’ I am. And if either my mood or my profile suggested I was a threat, then the information would be piped through Slack in order to alert the people who need to know. It was an ingenious demonstration of how cloud-based technology, APIs, natural language processing and machine learning could be assembled to construct an artificially intelligent assessment of the risk posed by a single person.

You can see a screen capture of my personality scores above, and below is the summary of the profile information they obtained. The techniques are not perfect; I maintain separate social media accounts for work and personal life and there is little interaction between them, so lots of pertinent data was missed. And IBM Watson is not yet a good judge of human character, as I can vouch based on some of the personality scores I received. For example, Watson failed to appreciate that I am very interested in the arts, despite trawling through the Twitter account I use to promote my short stories! (Or maybe Watson is an excellent literary critic, and refuses to ascribe any merit to my writings.) However, we know these techniques are rapidly improving each year. Now is the time for businesses to be experimenting with them, gathering data and working out how to gain a competitive advantage. We use lots of clever techniques to identify fraudsters, but suppose you could identify them just from the words they use? They are bound to respond by intensifying the effort they put into stealing other people’s identities, but even that might be undone if AI can tell if someone is making a purchase that is out of character for them. 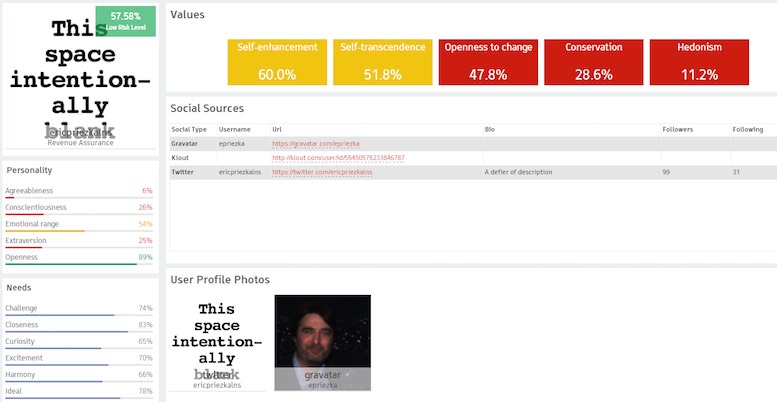 The profile calculations said I was 47.8 percent open to change, and that is about right. The potential for using technology like this is thrilling; the dangers are obvious too. But we cannot ignore the potential. We must embrace and experiment. If we do not familiarize ourselves with what this socially intelligent technology can do, we risk the worst outcome of all: that it will be used against us by competitors, criminals and enemies.