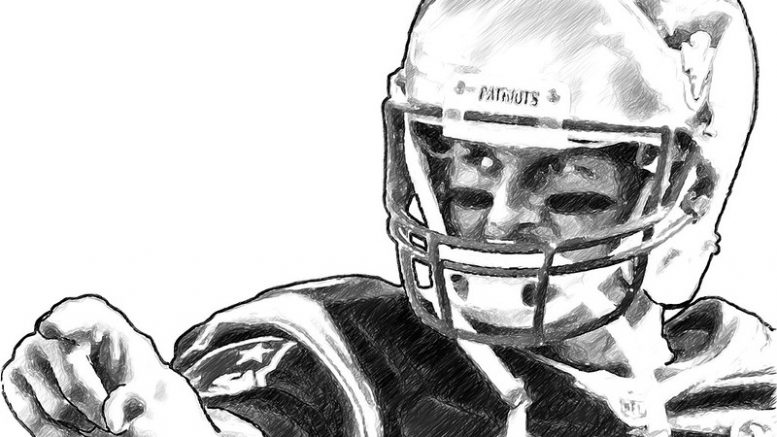 The 56th Super Bowl, the championship-deciding final of the American Football season, will be played on Sunday. Legendary quarterback Tom Brady will not be playing, despite appearing in 10 previous Super Bowls, and setting a new record of seven victories when he led his team to success in last year’s final. This season his Tampa Bay Buccaneers fell 27-3 behind the Los Angeles Rams during their play-off match, and whilst Brady inspired the Buccaneers to level the scores at 27-27, they lost to a field goal kicked during the final seconds of the game. Brady has now announced his retirement from the National Football League (NFL) after 22 remarkably successful seasons playing in the most important position in this most brutal of sports. During his career Brady set an extraordinary series of records, including most games won (277), most games played by a quarterback (363), most ground gained by throwing a forward pass (96,969 yards), and oldest player to receive the Most Valuable Player award in a Super Bowl (43 years, 6 months and 5 days). Brady also holds the record for the most times a quarterback has been tackled whilst holding the ball, otherwise known as a ‘sack’, with 615 sacks in total. This is a sport where quarterbacks have had their careers severely interrupted or ended by injuries sustained when sacked, including such greats as Steve Young, who retired after suffering multiple concussions, and Joe Theismann, whose leg was horribly broken when he fell awkwardly after being hit from behind. So how did Brady thrive for so long in such a risky sport?

The secret of Brady’s success does not lie in his innate athletic ability. Brady’s high school coach said he was “slow as molasses” and Brady was the second-slowest quarterback at the trials he participated in prior to his being drafted to the NFL. The same trials also measured how high Brady could jump, and his leap of 24.5 inches ranked in the bottom 3 percent of all the quarterbacks tested that year. Brady was not physically tough or combative either. A scout observed that Brady was “skinny” and that he “gets knocked down easily”. On one occasion his high school coach found Brady stuffed inside a locker that his teammates had pushed him inside. The most important part of a quarterback’s physique is his throwing arm, and Brady did better when measuring the distance he could throw the ball, though the same scout also reported that he “lacks a really strong arm”. The statistics show Brady threw plenty of good passes but the average distance was modest, especially toward the end of his career. The accuracy of the throw matters as much as the distance, but that same scout noted that young Brady was not that good at spinning the ball to increase accuracy: “does not throw a really tight spiral”. Given the mediocre appraisal of his physical abilities, it came as no surprise that six other quarterbacks were selected ahead of Brady when he was drafted to the NFL in 2000. Not many people will remember the names of those quarterbacks, who collectively started 191 NFL games compared to the 361 games for which Brady was in the starting line-up. So why did Brady prove to be so much more successful than players originally considered to be better than him?

There were three key components to Brady’s success:

These are attributes that every risk manager should pursue.

You can’t go out and practice average on Wednesday, average on Thursday, okay on Friday and then expect to play well on Sunday.

Brady is known for an almost obsessive dedication to preparing for every game he played. He took pride in learning and mastering the enormous playbooks given to him by his coaches, so there would never be any doubt about what he was expected to do, who he would throw the ball to, or how he would throw it. Even toward the end of his career, Brady remained fanatical about pursuing perfection in his throwing motion, perhaps driven by a need to prove his spiral could be tighter than anyone else’s.

Preparation also makes the difference between good risk management and mediocre risk management. It is why we execute drills for safety and why we wargame the management of a crisis. Average risk managers obtain forecasts and then hope they prove to be accurate; excellent risk managers want their business to be able to execute thousands of different plays from its playbook, even though only a small fraction will be used in reality. This is because thousands of things could go wrong, so we must be prepared for those eventualities, even if many of them are unlikely.

Every quarterback can throw a ball; every running back can run; every receiver is fast; but that mental toughness that you talk about translates into competitiveness.

One way to compare quarterbacks is to analyze the average time from when they are handed the ball at the scrimmage to when the ball leaves their hand because of their forward pass. Whilst spectators find it exciting to watch quarterbacks hold a ball for upwards of four seconds or more whilst dodging tackles and looking for an open receiver, Brady typically held on to the ball for 2.5 seconds or less. Brady’s dedication to practice contributed to this statistic, but it also demonstrates Brady is one of the quickest decision-makers in NFL history. When other players may still be working out what to do, Brady will have already seen what is happening on the field of play and executed accordingly.

Clichés about risk management may orient around tense conversations about what to do in crisis situations, but the time spent trying to determine the right course of action is time in which harm continues unmitigated. Quick and decisive action requires leadership and confidence. This also means that a risk manager who expects to gain the confidence of their peers so they are trusted to lead must be willing to show they can act quickly and decisively when the situation merits it. Many long hours may be spent on preparation but sometimes it is vital to resist the temptation to pour more time into data gathering and analysis when it is better to act on information that is already available.

On the field, you come into sync with your teammates and coaches and together you achieve something that you could never do on your own.

The quarterback is the most important player on the field, but American Football is one of the most complicated team games, with every player needing to understand their function at all times. Brady’s recognition of the importance of the team was illustrated by his approach to negotiating his own wages. NFL teams are subject to an overall pay cap. Nobody on a salary of USD15mn per year can complain about poverty, but many quarterbacks negotiated higher salaries than Brady. It has been estimated that Brady could have earned USD60mn more across his career. However, Brady accepted lower wages so money could be spent on hiring and keeping other great players. Given the length of Brady’s career, taking lower pay may ultimately have been a shrewder investment than moving to another team which could have paid him more but forced him to take more risks to win.

Telcos are complicated businesses too. Many risks stem from employees being incentivized to behave in ways that will not lead to the best overall outcome, especially when risk is taken into consideration. Risk managers need to show by their words and deeds that they are trying to bring all parts of the business into alignment. That also means they must be objective in their evaluation of risk. A risk manager’s priorities should reflect the opportunities to add the greatest value to the business, whilst recognizing these priorities will change whenever the business reduces a risk by successfully mitigating it.

Tom Brady has a fiercely competitive spirit that would have likely led to him excelling at any career he chose. He harnessed his desire to win and used it propel him forward because of the strength of his discipline. But wanting to win is not enough. How you play the game also matters. I will leave you with one further quote from Tom Brady that illustrates why he was destined to be a winner even when others raced ahead.

I think you can just go out and try to be the best you can be, deal with people with respect, with honesty, with integrity, have a high moral standard. I’ve always really tried to exemplify that as an athlete. I’ll continue to try to do that.

New Course on RAG Learning: How to Run a Facilitated Risk Assessment Workshop