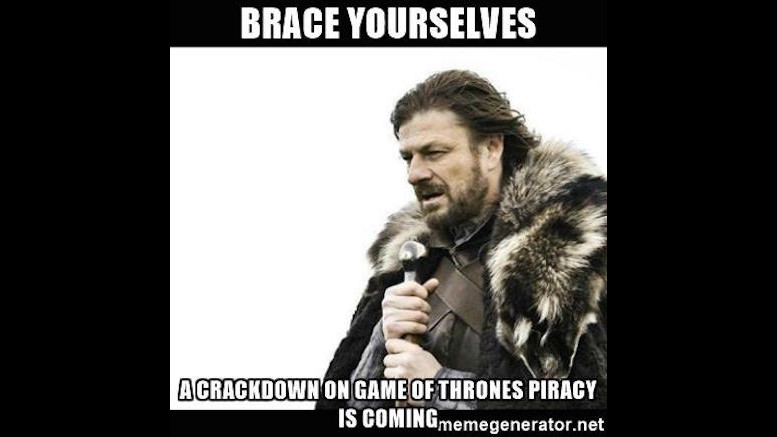 A lot of people like Game of Thrones, apparently. They like the US television series so much that they watch it without paying. This is hardly news… even if news broadcasters want to treat it like news. But the following two-minute clip from the Canadian Broadcasting Corporation (CBC) about the piracy of Game of Thrones unintentionally gives us ten quick lessons about what telcos are doing wrong, and why the pirates will prevail.

You may not like Game of Thrones. I may not like Game of Thrones. But if a million billion gajillion people say they ‘cannot miss’ an episode of something then they will go to any lengths to watch it. They may even pay for it. Money is made from big brand content that gets heavily promoted so everybody has to watch so more people watch so they tell their friends so their friends watch too and then everybody has to watch whether they like it or not and then even more have to watch because they cannot afford to miss an episode because now they are hooked. In other words, any telco wanting to provide retail services should either secure the rights to the most desirable content or accept their expensive network is going to generate a lot less money than it would have otherwise.

2. “…even though she doesn’t have cable”

The use of the phrase ‘even though’ reflects the thinking of the past, or of the herd, or of lazy journalists who repeat simple tropes. The idea you need a certain kind of network in order to obtain a certain kind of digital content is rubbish. Businesses that think there is an innate connection between distribution networks and content should contemplate why we never hear anyone saying: “Jeff watches every Marvel superhero film, even though he isn’t a member of Blockbuster.”

Watching a TV program at somebody else’s house is not against the law. And therein lies a major problem for anyone arguing that pirates are wicked people who should be punished. People share stuff all the time. Part of the reason why people watch Game of Thrones is for the social aspect of talking to other people about it. Big businesses with armies of lawyers can draw sharp distinctions between what is lawful and what is not, and they do so to maximize their profits. But for ordinary people the distinction between moral and immoral behavior is not so obvious, and never will be.

4. “…but around the world, millions more streamed it illegally”

The news segment quotes an unnamed ‘British piracy monitoring group’ as saying that 90 million people illegally watched the first episode of the new season of Game of Thrones. It would be more accurate to state that a business which sells anti-piracy solutions claimed that the show had been pirated 91.74 million times. When put like that, it becomes more obvious that the headline figure – which was issued as an attention-grabbing press release – was designed to drum up business by exaggerating the extent of piracy whilst offering an estimate that is so spuriously precise that the result is farcical. To illustrate how I know this number is wrong, the geographical breakdown claimed that the program was pirated 6.25 million times in Britain. To be true, 1 in 10 of the British population must have already seen the show. That is obviously an inflated estimate. It can be easily disproven by asking samples of people if they know what happened, or even if they have heard of the show. If I can phone 12 Brits and ask them what happened in Game of Thrones, and if they all say ‘no’, then I already have good evidence of exaggeration.

What this illustrates is that we can assume piracy is big, but calculating the scale of the impact will be difficult. The challenge is made worse by the tendency for some parties to present misinformation as reliable facts.

So says Dan Deeth of Sandvine, when talking about the ease with which people can use Android-powered media players to find and stream pirated content. But who gave a Kodi box to Dan’s mum? Perhaps Dan should confess to what kind of gift he bought for Mother’s Day this year.

The truth is that people do not use these boxes if they do not know about these boxes. A minority of people are currently aware of this tech, irrespective of how easy it is to use. However, the danger is obvious. Amy might be going to a friend’s house to watch their cable TV, but friends could introduce her to Kodi and piracy too. The more people start to use convenient piracy tech, the more other people will find out about it, and want to use it too. This also raises the question of whether news stories about the scale of piracy are actually a great way to encourage more people to become pirates.

The segment continues by telling us that HBO, the makers of Game of Thrones have “sent notices to rulebreakers, asking them to stop.” That sounds weak, because it is. Enforcement is not going to be an affective solution to piracy, no matter how many laws or rules are imposed on people. Every few years we learn of a new technology that is a major threat to copyright. The correct inference is not to rush to ban that technology, or to use the law to punish infringement. The repetitive nature of scares about the ‘massive’ audiences being lost to piracy should make it obvious that these people will not simply be converted or coerced into happy fee-paying customers, especially by inventing yet more of the rules they have always broken anyway. The number of pirates will only be reduced by a multi-layered strategy. One of the key components of an anti-piracy strategy is setting prices that customers are willing to pay, and another is providing them with content in ways and at times which are convenient for them.

In a statement to CBC, Bell Media calls piracy of Game of Thrones ‘extremely disappointing.’ It encourages fans to subscribe to HBO Canada where they can watch all seasons.

Why is one business so actively promoting another business? Why did CBC even ask the opinion of Bell Canada, a subsidiary to one of Canada’s largest telco groups? It must be because HBO signed an exclusive deal that makes Bell Media the only lawful distributor of HBO content in Canada. It is no surprise they may feel ‘disappointed’ that piracy undermines their revenues. To please their shareholders, Bell Media should have responded by explaining what they intend to do about it.

The news segment then interviews Meghan Sali of OpenMedia, which is referred to as a ‘Canadian internet advocacy group.’ Some time ago I joined an email distribution list used by OpenMedia, which meant I literally received every poorly-informed ill-conceived email sent between every nincompoop member of that list. Amongst that group, Meghan Sali excelled at delivering the highest possible output for the least possible knowledge.

Internet advocacy groups can win by endlessly repeating ignorant opinions that other people have previously expressed on the web. They can repeat nonsense so often that it is elevated to the status of irrefutable urban legend. Many of these advocates are attention-seekers who have realized that using the internet to make a fuss about the internet is a really effective way to get noticed. They are not only noticed on the internet, but then mainstream media will call them and ask them to come to the studio to voice their ignorant opinions there too.

Telcos should not idly tolerate the spread of misinformation that relates to their business. Unfortunately, whilst telcos might appreciate the value of consumer education initiatives aimed at narrow objectives like anti-piracy, they lack the imagination to advise and inform more generally. The laissez-faire attitude of telcos becomes especially problematic when their interests intersect with those of young adults whose opinions are disproportionately influenced by what they discover on the web. Telcos play a narrow game of corporate communications whilst the people who irrationally hate telcos will traduce them using every means at their disposal. All of that brings me to my next observation…

9. “It’s just another example of the way in which Canadian customers are unfortunately finding themselves short-changed by our big telecom companies”

Meghan Sali was asked why US consumers can pay to legally watch Game of Thrones over the internet in the USA, but not in Canada. There are some accurate answers that Meghan Sali could have given to this question, including:

However, Sali went for the tubthumping default answer beloved by ignorant internet advocates: blame everything on the telco. This shows that when people like Sali argue for net neutrality, they really do not know what it means. Nothing stops HBO from legally distributing their content any way they like. They could behave like Amazon and Netflix, creating original content which they intentionally supply to a worldwide audience via the internet. They could put their content on iTunes on the same day it is first shown on cable TV. They could sign non-exclusive deals with distributors, and use all sorts of businesses as internet middlemen. They could even give their stuff away for free, if they wanted. There is nothing that any telco, Canadian or otherwise, could do to stop HBO supplying their content in ways like these.

The truth is that HBO carves up regional markets because they want to maximize profits. However, consumers like Game of Thrones, and that means they like HBO, so another business must be blamed. This is where telcos step up and fill the void, because everybody hates them already.

10. “Amy Leaman will pay for season 7 once it’s available on iTunes, just as she has for all the other seasons”

The economic impact of piracy is easy to exaggerate because pirates may subsequently purchase the content anyway. Leaman represents the kind of customer who wants the convenience of watching the content now, but does not expect to have to pay a premium for it. Her understandable human rationalization of copyright infringement grinds against the way markets are carved up, not just geographically, but also in terms of time. She will pay a price that she considers fair. Telcos and media companies should respond to human nature by constantly asking themselves the following question: how much is it worth upsetting our customers, by disputing their conception of fairness, in order to make more revenue from supplying a product where each additional unit already has zero marginal cost?

Those were the ten lessons I took whilst watching CBC’s news segment on Game of Thrones piracy, although it was only two minutes long. You can watch the story yourself, using the embedded viewer below.