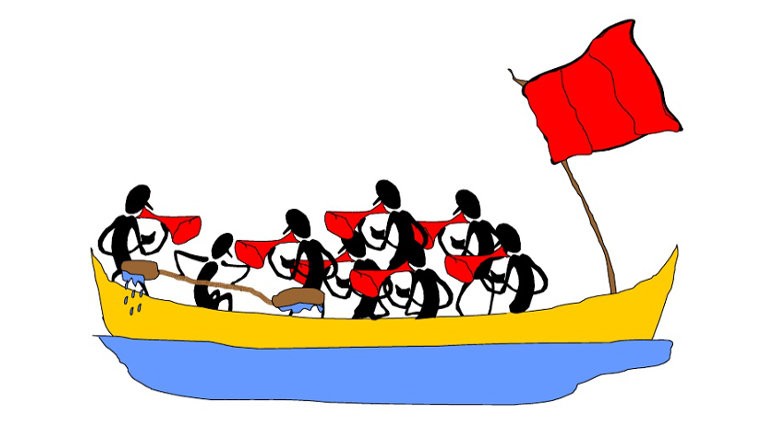 Everybody wants more collaboration… do they not? Not always. In the Harvard Business Review, Rob Cross, Reb Rebele and Adam Grant argue that the most valuable employees get overloaded and ‘burnt out’ because they are forced to participate in too much collaboration. That is a problem for me, because I spend most of my life urging people to collaborate more. And it is a problem for you, because risk management and business assurance always needs to be collaborative in nature. So why does collaboration become a burden for some employees, and what can we do to avoid overloading the business’ most crucial assets?

To begin with, let us look at the data presented by Cross, Rebele and Grant. It makes for stark reading. They begin with a simple statement about how work has changed.

According to data we have collected over the past two decades, the time spent by managers and employees in collaborative activities has ballooned by 50% or more.

Then they perfectly diagnose the symptoms of too much collaboration.

How much time do people spend in meetings, on the phone, and responding to e-mails? At many companies the proportion hovers around 80%, leaving employees little time for all the critical work they must complete on their own. Performance suffers as they are buried under an avalanche of requests for input or advice, access to resources, or attendance at a meeting. They take assignments home, and soon, according to a large body of evidence on stress, burnout and turnover become real risks.

However, the burdens are not evenly shared.

…research we’ve done across more than 300 organizations shows that the distribution of collaborative work is often extremely lopsided. In most cases, 20% to 35% of value-added collaborations come from only 3% to 5% of employees.

And the people at the top of the business may not recognize who is doing most work.

…when we use network analysis to identify the strongest collaborators in organizations, leaders are typically surprised by at least half the names on their lists. In our quest to reap the rewards of collaboration, we have inadvertently created open markets for it without recognizing the costs.

When I read the article, I felt shocked by it. That was not because the article stated any surprising facts, or made any unexpected observations. On the contrary, I was shocked by how the authors had painted an accurate yet disturbing picture of the dysfunctional way people work together in large, loosely-organized, multinational businesses. In all the telcos where I worked, it was easy to identify the key individuals – people who may not be very senior, but who had unique and important knowledge and responsibilities – who seemed to be essential to every major project, and so became a bottleneck for all of them.

What was even more shocking was recognizing how I was a burden for these people. I would compete for their time and attention. Their knowledge was vital for identifying, evaluating and mitigating risk. But the last thing they needed was yet another person demanding a meeting, and giving them additional tasks to perform. Is it any wonder that these individuals might complain of audit fatigue, or that they would skip my meetings and ignore my emails?

One way to reduce the burden on people is to spend time obtaining information from reference material whenever possible, instead of just directing a query at a person. This point is alluded to in the HBR paper.

Instead of asking for specific informational or social resources — or better yet, searching in existing repositories such as reports or knowledge libraries — people ask for hands-on assistance they may not even need. An exchange that might have taken five minutes or less turns into a 30-minute calendar invite that strains personal resources on both sides of the request.

However, the problem I often faced was that there were no useful reports or knowledge libraries. And we can also understand why that happens: the only people who could write the necessary documentation are the same people who are already overburdened with meetings! This reminds me of the parable of the lumberjack with the blunt saw. When asked why he does not improve efficiency by sharpening his saw, he complains that he has no time to sharpen the saw because he has so many trees to cut down!

I often argued that knowledge-sharing tools like wikis and case management databases were key to better risk and assurance, because they allowed people to communicate with each other whilst also creating useful documentation that others could access at a later date. However, the effort I put into promoting these tools only garnered mixed results. Users faced the overhead of needing to familiarize themselves with using new tools. They were discouraged from adopting them if they believed nobody else would use them, and they feared they would still have to deal with the same volume of requests for information through the old, established channels for communication. Collaborative online tools struggle to replace email for the same reasons.

Sometimes cultures need to change via a ‘big bang’, or else the people who stick with the old conventions will penalize anyone attempting to execute piecemeal change. Furthermore, management have even less visibility of the time and effort put into shared online repositories. Managers can literally see if somebody spends time in a meeting, but the time spent writing online documentation is almost invisible. If business leaders are already unaware of who is most burdened by demands for collaboration, they will likely be ignorant of the potential efficiency gains that would come from better documentation, and so they will not reward employees who spend time on documentation.

Making excuses for my failures is not the same as offering helpful solutions. That said, we desperately need to find answers to these seemingly intractable challenges. As the HBR article points out:

…those seen as the best sources of information and in highest demand as collaborators in their companies have the lowest engagement and career satisfaction scores… Our research shows that this ultimately results in their either leaving their organizations (taking valuable knowledge and network resources with them) or staying and spreading their growing apathy to their colleagues.

The authors identify a few potential answers to the problem of depending too much on a few super-collaborators. I will briefly summarize their suggestions.

All of these ideas are worth considering, but risk and assurance professionals may not have the influence to pursue these goals. Is there more they can do, to ease the pressure on key individuals, whilst still engaging their assistance? I think so. The following list is my personal (and admittedly unscientific) riff on what can be done to help the top collaborators, by making the best use of their time and rewarding them for their contribution. In every instance, the goal is to avoid increasing their burden whilst encouraging positive engagement with risks and issues.

I did not agree with every suggestion made in the HBR paper. In particular, I disagreed with the following:

…we believe that the time may have come for organizations to hire chief collaboration officers. By creating a senior executive position dedicated to collaboration, leaders can send a clear signal about the importance of managing teamwork thoughtfully and provide the resources necessary to do it effectively.

To my mind, hiring a chief collaboration officer would be madness. The problem of too much collaboration is driven by senior people who have cross-functional objectives but no dedicated staff. I worked in one of those positions, and I was acutely sensitive to the fact that I handed out tasks that were connected to my pay and bonus, but not to the pay or bonus of the people who needed to perform them. The top-heavy and knee-jerk solution of hiring a new “Chief {insert problem to be solved here} Officer” leads to the kind of organizational madness that many of us recognize in cartoons like that shown above. After all, what do all those managers think they are doing, if not ‘collaborating’ with the one person who actually rows the boat?

The solution to managing risk and tackling mistakes is not to give the relevant responsibilities to managers who sit near the top of a virtual hierarchy, so they can give more and more instruction to a dwindling number of workers. The solution is to make every member of staff responsible, and then to hold them accountable. If resource bottlenecks are the cause of excessive risk or recurring failures, then address those bottlenecks. By doing so, the organization also diminishes the excuse that every problem is caused by inadequate resources. Sometimes the problem is poor prioritization or bad decision-making.

Risk and assurance managers are most helpful to an organization if they can differentiate between situations where more resources are needed, and situations where the business just needs to be smarter with the resources already available. By exerting influence when more resources are required, and by reducing collaborative strain where it occurs, risk and assurance professionals will also have the best prospect of exerting influence when the underlying problems have nothing to do with resource constraints.

Collaboration is key to success in modern business, but it needs to be managed like every other aspect of business. The cross-functional responsibilities of risk and assurance managers allows them to observe and respond to issues created by excessive collaboration and over-reliance on key individuals. We must lead the way by example, and factor our observations into our evaluations and recommendations for improvement.