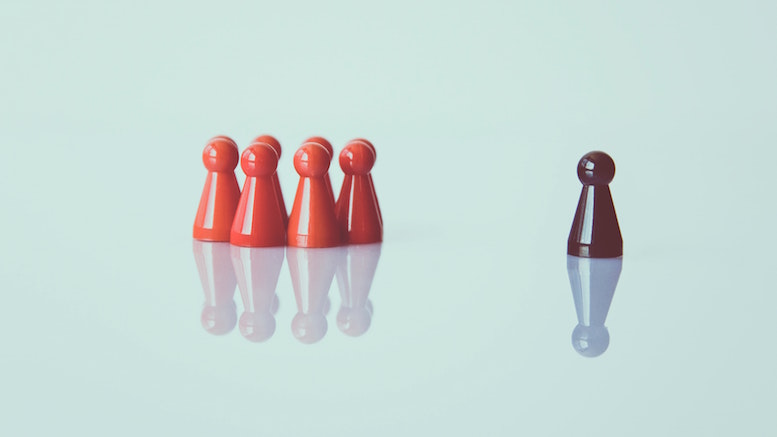 Some recent events may have drawn your attention to the inequalities we find in the world today. I am not going to comment on protests and justice; nobody reads Commsrisk because they want my opinion on race relations or policing methods. But if now is not an appropriate time to state the following, then no time ever will be.

The evidence for this is all around us. Whatever you may think of the notion of white privilege, I defy you to show me evidence that black people have an equal opportunity to succeed in our line of work. Nobody would dispute there are black Nigerians, black South Africans and black Jamaicans trusted to manage risk for telcos in the countries of their birth, but how many of them have the chance to step up and lead our work on an international level? And in those countries where black people are in the minority, how many are promoted to the senior ranks of what we do? This is our profession, and that makes us responsible for it. Analyzing data is core to our work; we have no excuse for blinding ourselves to the disparity in the promotion of black people.

I am a white guy. That is an accident of birth, and I see no reason to apologize for it. But if I fail to reflect upon, and respond to, the obvious inequities around me then I would deserve to be pilloried. Tomorrow I am going to participate in a panel discussion during an international conference, the virtual version of International Telecoms Week (ITW). I will join a panel entitled: “Unifying the Industry to Reinforce a Tougher Stance on Fraud”. The panel will discuss international fraud and the standards and associations that combat it. There will be seven people on the panel, including myself. I do not need to tell you about the racial mix of the panel, because you know it already. You have seen the leaders of our global profession, and you already know what color they tend to be.

It would not be fair to criticize the organizers of ITW specifically. If they ask for the person who runs the Risk & Assurance Group (RAG), then they will get a white guy, because I am a white guy. I do not wish to blame anyone in particular for racial bias, because if you need to recruit a trained engineer and no black people have trained as engineers then you cannot recruit a trained black engineer, and neither can the ITW engage non-white industry leaders to speak at their event if all the industry leaders happen to be white. The ITW are not at fault for the way our industry works. But we can all look to ourselves and ask if we are doing enough. If there were no black engineers then the solution would be to offer black people training as engineers, and if there are no black industry leaders then the solution is to give black people the opportunity to learn and progress with their careers so they might be industry leaders in future.

Criticize me, if you want. We can all do better. I am trying to ensure some of the leaders of the future look less like me. Last year I wrote that too many white faces dominate telco risk management and I promised to:

challenge everybody working in the field of telecoms risk management – black or white, man or woman – to assess whether the best work is receiving the attention it deserves, or whether prejudice and apathy is having a disproportionate impact on the progress we collectively make.

As a result, I now take it upon myself to advise the RAG Steering Committee about the diversity of RAG speakers. I draw your attention to this not because I deserve praise, but because I am failing to see others make similar promises. Nobody likes to see me pointing a finger at others and saying they did wrong, least of all me. When I do it, then somebody will invariably tell me to shut up. It is a boring chore to draw attention to the failings of others. But if a conspiracy of silence means no change is taking place, then I will eventually feel compelled to point fingers at people for failing to encourage racial diversity.

As I observed in my previous article about racial bias, there are some practical obstacles to achieving equality, such as the cost of flying people to appear in conferences held in Western countries. But that particular excuse does not apply now. Now is the time when everything has moved into cyberspace. They have the internet in majority black countries too, so why are we still seeing agendas for virtual events that make it seem like the English-speaking world is uniformly white? Language barriers may make it harder to engage an expert speaker from China or South America or francophone Africa, but there is no excuse for the exclusion of so many black professionals who speak English and do good work for telcos.

Not all my criticism is for white people, though. Black practitioners need to take responsibility for raising themselves up too. And that starts by recognizing that there is nothing ‘natural’ about expecting all education to come from white people. If you are a black African, and you buy a training certificate because it comes from a white American, then you are a racist too. Unless you know that white American has done work that makes them worthy to be an educator then you are making an assumption based on an accident of their birth, not what they have accomplished.

That is why I remain a ferocious critic of Rob Mattison, President of the Global Revenue Assurance Professional’s Association (GRAPA), and of anybody who endorses his actions. Mattison has systematically exploited the trust of telco employees in developing countries. And now, ironically, some of his many victims will defend him because that is better than admitting that their qualifications were issued by somebody who had no qualifications. Mattison was never recognized as a leader by other leaders; that is why Americans who work in telecoms risk management have never heard of him. When I chastise Westerners on the rare occasions they signal approval for Mattison, their defense is to claim they were ignorant of who Mattison is!

Mattison has only adopted the mantle of a leader by climbing on the backs of black and brown people who believed his promises about career advancement because they could see no other way forward. And that makes white leaders also to blame for this situation, because we never filled the void by offering an accessible education program developed by finding a consensus amongst genuine experts. We have had a lot of committees with a lot of white faces on them, but the collective educational output has been poor. Meanwhile, not a single black person will ever become an industry leader through their allegiance to GRAPA, including all the multitudinous ‘committee chairs’ that have been appointed during its existence, because GRAPA only exists so one white American can generate profit by telling other people what to do. And that means it will never open a door for a black person to become a leader of our profession, irrespective of the number of certificates hung on people’s walls.

It was 2,000 years ago that a man called Seneca the Younger observed: “by teaching, we learn.” The words ‘professional’ and ‘professor’ have the same root. We are not professionals if we cannot profess our knowledge. So my challenge to the black readers of this article is straightforward. Do not expect me to acknowledge your expertise because you can show me a list of all the courses you have completed. If you have gained expertise, then teach me something. If you can teach me something then I will do everything I can to help you teach it to others. This is how real leaders are created. They are forged by professing their knowledge to an audience that may not agree with them. Mattison did not wait for approval before he called himself a teacher, but he has never subsequently received the approval of anyone worthy to be a teacher. You can do better. So stop wasting time and money on tokens of your supposed educational achievements. Show people what you know, and learn how much of a leader you are.

I think you already know who is failing to promote adequate opportunities for black professionals, and other people of color. You know just as you knew the color of every person on the ITW panel I will join tomorrow. Taking to the streets, or pulling down a statue, or censoring an old film may not be the right way to deliver equality in our field, but I sympathize with the frustration caused by racism. If you are frustrated then use the energy it gives you to do something productive in your actual line of work, an area where you might genuinely help to change the world. We can and should promote more black telecoms risk professionals, by ensuring they have the opportunity to demonstrate their expertise. And we should start now.