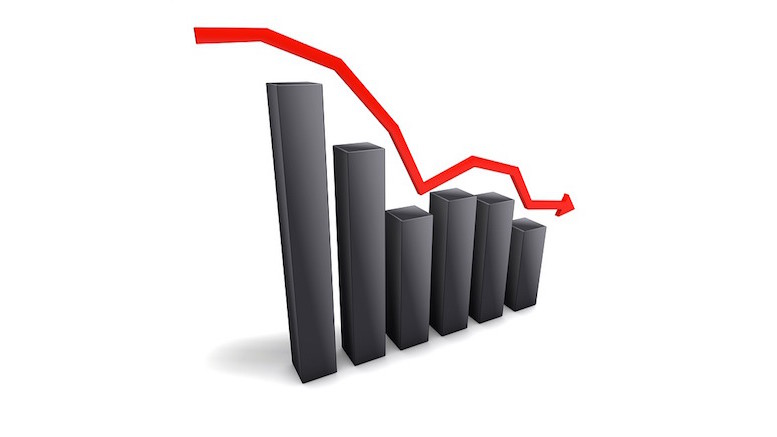 You could argue that Donald Trump saved Cartesian last year. The US-headquartered supplier of telecoms revenue assurance and assorted other services was going to be kicked off the Nasdaq stock exchange because their share price had fallen under the minimum $1 limit. But then Trump won the election to be President of the USA, US stock markets went on a bull run, and Cartesian rallied too. Their shares broke back through the $1 barrier, and Nasdaq said they could remain on the stock exchange. However, poor results have since dragged Cartesian down, and their shares have submerged below $1 again. During May they fell under 50¢, though at Friday’s close they were at 66¢, and recently they have sometimes reached as high as three-quarters of the minimum level to continue being traded on the Nasdaq. They have until November 2017 to regain compliance with Nasdaq rules by maintaining a minimum closing bid price of at least $1 for no fewer than 10 consecutive business days. The question is, barring the intervention of another external surprise factor of similar magnitude to Trump’s election, how will Cartesian reach that figure?

Cartesian’s Q1 results were poor. Revenues were down, margins were down, and losses were up. Temporary factors were blamed but Cartesian’s management team have been promising a turnaround for a long while, and if the turning point does not arrive soon there will be no way back. The results were so poor that even CEO Peter Woodward admitted they were “not acceptable” when discussing them on the investor’s call. However, there was no sign of a strategy that might reverse Cartesian’s downward trend, and most of his analysis focused on external factors – that telcos were not signing deals – instead of talking about things that Cartesian might do to get more signatures on more contracts. At times it seems the only thing Cartesian does know how to do is to cut costs, which may give them additional breathing room but is not going to be sufficient to make them profitable.

One obvious problem with the business is that they seem to be increasingly dependent on revenues from outside the USA. Almost two-thirds of their business is generated in EMEA, which is not much help if the exchange rate is walloping you when converting those revenues back into US dollars. However, Cartesian’s CEO likes to talk about telcos in the US market. That might make sense if more of those US telcos were Cartesian’s customers. It makes less sense for a business that decided to purchase several foreign companies, only to tell its investors that its market headwinds have been created by factors like increased competition between US MVNOs.

Meanwhile, poor results keep translating into diminishing reserves of cash. Cash and cash equivalents totaled USD3.2mn at the quarter’s end, down from USD4.1mn at its beginning. You do not have to extrapolate that line for long before you reach the time when employees are not going to get paid. Maybe they can increase their debt factoring, but the problem with making losses every quarter is that they tend to deplete the bank account, not replenish it.

Cartesian’s management have been relatively positive about their revenue assurance offerings, with the CEO saying that “demand and activity have been increasing” whilst caveating that “the business assurance market is more broad and may encompass next generation issues, including… network assurance and IoT.” What is not evident is how Cartesian intends to position itself as a supplier of this broader range of services when they make such limited effort to pitch the revenue assurance services which lie at their core.

Perhaps the key excerpt from the investors’ call came when CEO Woodward said:

I hope this discussion has conveyed an appropriate sense of dissatisfaction with the status quo and recent business results, yet optimism that Cartesian has all the makings of a successful company if steered in the right direction. There have been other attempts to alter the business model in the past but they were made without the commitment to see the transformation through. We expect to complete the evaluation of our business strategy and to be able to more concisely articulate it by our next earnings call.

In other words, Cartesian’s CEO could not say how his management team will save their business, but he promises to have more to say in future.

All of this makes me wonder why any investor would want to buy Cartesian shares… unless they wanted to buy the whole company and then split it up, saving the parts which are profitable and discarding the rest. But what stops the current management team from doing the same? They keep saying they will articulate how they will transform, but why do they struggle to explain which parts are doing well, and which are struggling? Presumably a better business model would involve more of the activities that are profitable and less of the activities that are loss-making.

Cartesian is an unprofitable business with diminishing cash reserves whose stocks are being threatened with expulsion from their exchange. Management admit the failure of previous attempts to turn the business around, and promise they will devise a better turnaround plan in future. There will be no bull markets due to a change of President unless Trump resigns or is impeached. But you could bet on Cartesian because you anticipate some more improbable external events will give them another temporary reprieve. At present there is no sign of a savior on the horizon, and Cartesian needs one, because they seemingly have no idea of how to save themselves.

Cartesian Delists from Nasdaq; CEO to Step Down