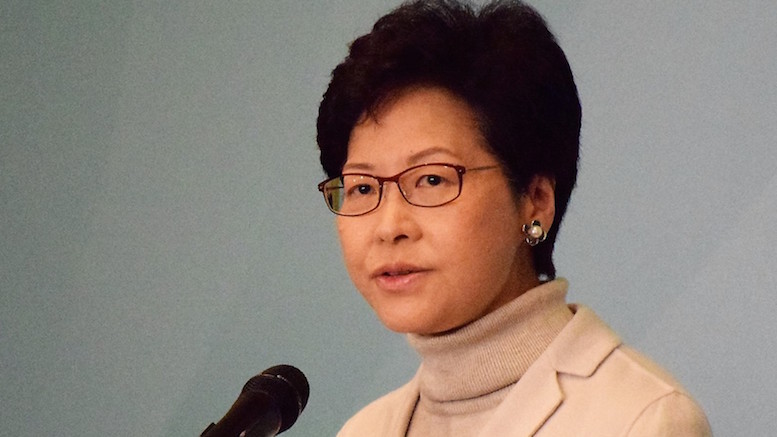 Carrie Lam (pictured), the Chief Executive of Hong Kong, is one of the best-paid government officials on the planet, with an annual salary of HKD5.2mn (USD670,000). All of this money is paid in cash. The power of the US dollar, and by extension the US government, is so great that even Hong Kong banks dare not defy US sanctions. The result is that Lam cannot open a bank account because of US sanctions on political leaders accused of undermining Hong Kong’s autonomy. However, the USA’s grip on international banking is about to be loosened because of the digital realm and two innovations:

Governments, including the Chinese government, tend to dislike cryptocurrencies because their distributed ledgers support a person-to-person (P2P) mode of doing business that is an obstacle to central monitoring and control. On the other hand, a P2P method of transferring money would be tricky for the US government to sanction. An institution like SWIFT may be based in Brussels but could not sensibly continue to coordinate international transfers if it was prevented from handling US dollars, whilst a distributed ledger would not need support from bodies that also use the US dollar. Two parties could move money between themselves without needing to rely on anyone else enabling the transaction, because the transaction does not require the updating of records relating to any bank accounts. At the same time, if this transfer involves a currency that is legal tender in a country, such as e-RMB, then the recipient knows they will be able to spend the money with the same confidence as any other state-backed currency.

Instead of paying Lam in cash, imagine if her government paid her in e-RMB via a blockchain-based transfer. The US government could impose sanctions on the Hong Kong government as punishment, but they could have done that anyway, and the reason to target individuals like Lam is to distinguish between punishment of individuals that do things the US government does not like and punishment of everyone who lives in a country ruled by people that the US government does not like. The US government could also try to impose sanctions on the businesses where Lam does her shopping. Like other Hong Kongers, Lam could pull out her mobile phone and use it to pay for her groceries, clothes, taxis and all the other day-to-day expenditures she has. It would be unrealistic to expect these businesses to be targeted by sanctions, even if the US was somehow capable of determining they had transacted with Lam.

China is way ahead of the USA when it comes to digital money. This is key to understanding why the Chinese government will be able to reduce US influence in ways the average American voter does not comprehend and the average American politician lacks the imagination to worry about. Of the world’s largest economies, only the UK rivals China for the value of cashless payments relative to the overall size of the economy. In 2019, the Chinese people collectively spent USD533bn via cashless payment methods, compared to the USD119bn spent that way by Brits. The USA still has a much larger economy than China and the UK combined, but American cashless payments amounted to just USD103bn.

China is gaining a crucial advantage through a mixture of bold political leadership, technological know-how, and the widespread adoption of cashless payments by individuals and businesses. This will be used to accelerate the transition to a future where the significance of the US dollar has greatly declined. Perhaps the USA will latterly discover leaders who want to arrest the contraction of America’s influence over global payments, perhaps by allying themselves with increasingly unpopular tech titans like Facebook’s Mark Zuckerberg and his Libra currency. Even if they do, it would be surprising to see the US authorities adapt with the strategic coherence and operational urgency that has characterized China’s push into digital money.