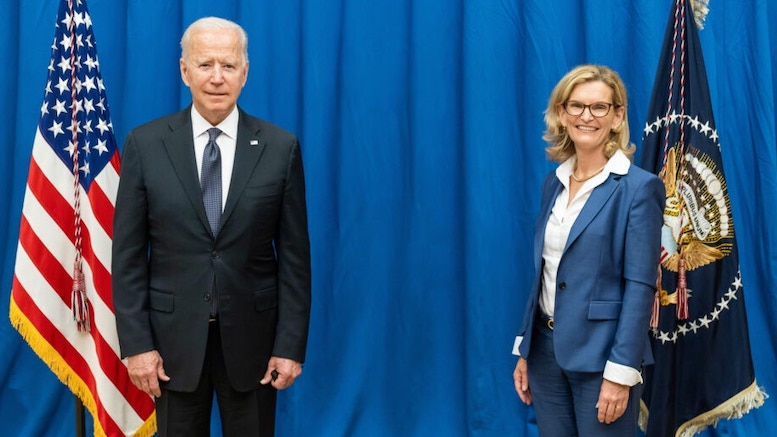 The changing of the guard at the International Telecommunication Union (ITU) neatly highlights who are the key players in the game of world telecoms domination. After two terms in office, ITU Secretary-General Houlin Zhao will soon vacate the role. He leaves after spending eight years batting away US concerns that he was not just a member of the Chinese Communist Party, but was effectively working for the Chinese Communist Party. Expect tit-for-tat complaints about his successor, Doreen Bogdan-Martin (pictured right, with US President Joe Biden). She is an American whose election campaign was boosted by a seemingly endless series of endorsements from politicians of both major US parties. Bogdan-Martin had the good fortune of competing in an election where the only other candidate was Russian, at a time when the invasion of Ukraine has made Russia a pariah. Nevertheless, the Russian candidate was favored by 25 of the 172 countries who voted. This begs a question about how US leadership can be so unpopular that Bogdan-Martin, who already held one of the most senior roles at the ITU, was not able to secure a near-unanimous victory against a former member of Putin’s government at a time when his ex-boss is threatening nuclear war.

One explanation for the outcome is that the United Nations genuinely encourages almost every country to participate (apologies to any readers in Palestine) whilst most other ‘global’ governing bodies use money and cliques to limit who can obtain real influence. To understand my meaning, it helps to emphasize that the ITU previously did the same thing. There has been a lot of publicity surrounding the fact that Bogdan-Martin will be the first woman to lead the ITU in its 157-year history. It is less likely that you will have read that the ITU was exclusively led by men from Switzerland for the first 80 years of its existence. Misogyny is a form of bigotry, but so is the prejudice that says only a Swiss man can be competent to do a job. Swiss control ended at the beginning of 1950, when the job of ITU Secretary-General went to a man from the neighboring country of France. Since then, the agency’s leaders have been an Argentinian, an Indian, a Tunisian, an Australian, a Finn, a Japanese, a Malian, and Houlin Zhao from China. The only person I omitted from the list was an American, Gerald Cross, who served as ITU Secretary-General from June 1958 to October 1965. Whilst fans of Bogdan-Martin will hail her election as a victory for diversity, they may not want to dwell too long on the reasons why the pursuit of diversity is synonymous with putting another American in charge.

The majority of the Western press that welcomed Bogdan-Martin’s victory have also presented it as a victory for freedom. This, ironically, means keeping the internet free by keeping it out of the hands of the ITU, as also seems to be the intention of Bogdan-Martin. It is easy to see why people think ITU influence over the internet would be a bad thing. In 2019, the ITU considered a proposal called ‘New IP’, which was submitted by Huawei with support from China Mobile, China Unicom, and China’s Ministry of Industry and Information Technology. The opponents of New IP slammed it as a mechanism for national governments to fragment the internet so they could exercise dystopian control over what their populations would see. Those opponents of New IP were accurate in their analysis, but they are less keen to admit to one of the consequences of the tactics they have deployed to obstruct New IP. The original gangster IP is overseen by the Internet Engineering Task Force (IETF), a standards organization that was initially supported by the US federal government but which now belongs to the Internet Society, a US-domiciled nonprofit organization which goes to great pains to insist it is an international organization. And yet, I doubt anyone would be truly surprised by my observation that 7 of the 13 members of the Internet Society’s Board of Trustees are American.

The historical parallels should be straightforward for anyone who is honest enough to look at history with unbiased eyes. International governance of telephony began with a bunch of Europeans. When they gave up control it led to the creation of the ITU as we know it today, a body where somebody with connections to the Chinese government can be elected leader, and where somebody with connections to the Russian government can have the same hope. So to maintain the freedom of the internet, we are forced to accept the doublethink that the Internet Society is somehow more representative of the whole planet than the United Nations, even though it was set up in the USA, and is mostly influenced by Americans. Their goals may be noble and correct, and they may accept members from any country, but it is a dodge to claim there is no bias in the composition of the body that seeks to govern the internet. This would become immediately apparent if China attempted to flood a Western-oriented, English-speaking organization with new members who all express fervent support for New IP.

It becomes increasingly uncertain what the ITU is for if it will not take increasing responsibility for the internet. The twilight of public switched telephony networks has already begun. IP networks will take their place, and will be used for all electronic communications at a distance. If the ITU has no authority to guide the use of IP networks, then what will remain within the remit of a body whose mission concerns the use of networks? This is no purely abstract concern. As noted recently, proponents of US-led governance of call authentication have accepted the output of the IETF as if it were the gospel for IP technology that will discriminate between good calls and bad calls. Having the right digital signature means a call will be connected; having a bad signature, or no signature, would eventually mean the call is blocked.

Supporters of the current US strategy are so convinced it is righteous that they want existing non-IP networks to implement workarounds to transmit digital signatures as if they were IP networks. They made this choice instead of simply opting for a different design philosophy that is neutral as to whether a call is being carried over an IP network or not. Their plan also involves cajoling the whole world into following the same approach, so that digital signatures can be applied to all calls from beginning to end. The man who most influenced the adoption of this design is an American who sits on the Board of Trustees for the Internet Society. His employer is a US company that is responsible for misleading marketing that seeks to persuade national regulators to mandate the use of their technology by telcos. It is true that Huawei has sought to exert a dangerous influence over future comms networks; that does not mean the keys to the future should be simply handed to US businesses instead.