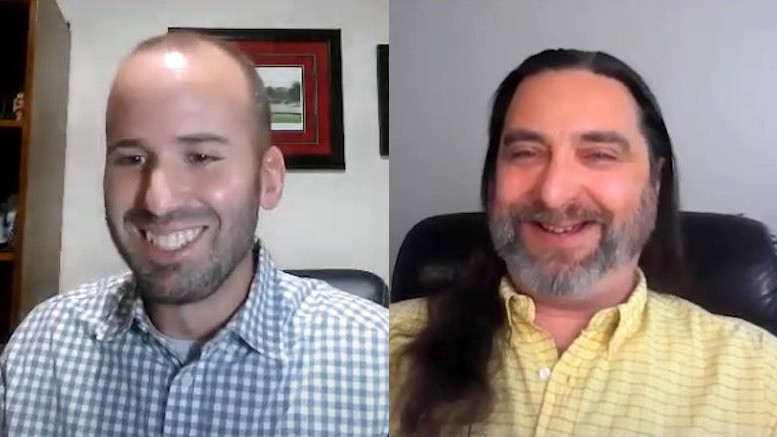 It was flattering to discover that Commsrisk provided the inspiration for 1Route’s RoundUp interviews on YouTube, a series where Jeffrey Ross (pictured left) interviews people who are making a positive difference in the telecoms industry. That does not explain why he asked me for an interview, but I gave one anyway. Jeffrey opened our show by saying he formulated the idea for the RoundUp series after reading one of the ‘unsung heroes’ articles that Commsrisk publishes near the end of each year. That is ironic because Jeffrey’s upbeat attitude often serves as an important reminder to me of the importance of finding pleasure in work. Good emotions and good ideas can create a virtuous circle as they travel around the world.

Managing risk tends to be stressful, and I often describe the conferences of the Risk & Assurance Group (RAG) as being like group therapy sessions. RAG puts a lot of effort into securing good speakers who will lead a vivid agenda but the most beneficial aspect of each event is the opportunity for everyone in the room to discuss their problems, and how they are tackling them, with peers who understand and empathize. That is why we encourage everybody to interact, instead of sitting in silence whilst only the listed speakers talk from the stage. Your spouse, friends and children may not have much appreciation of what your profession involves, and too few executives pay sufficient heed to risk management, so it is comforting to spend time amidst people who know how you feel because they do the same job for a different comms provider. However, if we always focus on the downsides of work then we will make ourselves gloomy. We can treat these events as group therapy, but that means the goal is to walk away feeling better about our situation and our prospects than we felt before.

The RAG team made plenty of time for fun during our last conference in New Orleans, and we will aim to do the same in a few weeks from now, when RAG holds its next event in Sydney. The first evening will be spent socializing whilst enjoying the world-famous view from the Sydney Opera House. The second evening may prove more anarchic as it will be spent at The Rocks, one of Sydney’s most bustling districts for nightlife, so I would not be surprised if some will remain partying late into the night although others will have to leave to catch their flights home.

Picking good venues always helps, but the greatest pleasure comes from the company we keep. Jeffrey contributed greatly to the convivial atmosphere in New Orleans whilst also addressing the serious challenge of creating interfaces so that telcos around the world can comply with the call validation requirements now being imposed by the USA. I know Jeffrey will make just as positive a contribution when we see him again in Sydney. There was a time when Australia was touted as being certain to follow the lead of the USA by making STIR/SHAKEN mandatory, but Australian regulations have evolved in a different direction so far. It will be a huge benefit to have Jeffrey in Sydney, representing the USA’s most open-minded STIR/SHAKEN certification authority. He will comment on the ways that digital signatures might be applied to international calls whilst hearing from all the major Australian telcos about the methods they have used to reduce spam and fraud. The problem of cross-border fraud and spoofing will not be effectively addressed unless we have professionals at all levels sharing their experiences with peers from other countries.

The pandemic has hurt our community by denying professionals the opportunity to spend time enjoying each other’s company. Despite this, I cannot deny that appearing on RAG TV and on various other podcasts and livestreams has given me lots of amusement. Spontaneous conversation encourages both new insights and witty asides, and the preparatory discussions that occur before a recording are often as much fun as the show itself. My apologies to everyone who has been awaiting a new season of live weekly broadcasts from RAG TV. It has been difficult to schedule Season 4 because we are conscious of the intense competition for attention we now face from associations that have less international reach, and that remained dormant for almost three years but which are all now returning to post-pandemic life at the same time.

I find it especially tiring to hear bogus claims that ‘international’ telcos are choosing to engage with associations that conspicuously hold all their meetings in just one country. The pandemic allowed those association to pretend they had an international following, but a different story is told by the locations chosen for the recent surge of industry events. Only holding meetings in one country does nothing to encourage the international cooperation that these associations pretend to support. Since the pandemic RAG has held conferences in the UK, Dubai, the USA, and will soon hold one in Australia. Contrast this with ‘premier international associations’ whose plan is to hold meetings in the USA, in the USA, and then to hold some 2023 meetings in the USA. Jeffrey is a proud Texan but he fully understands why US telecoms businesses will be sidelined if they expect the whole world to always come to them. That is why Jeffrey combines online activities like his 1Route Roundup with travel to events like RAG Sydney.

Jeffrey appeared on the first episode of the first season of RAG TV. The many laughs we shared during his 1Route RoundUp demonstrates the reason to schedule Season 4 so we can once again engage with Jeffrey and the other great guests we intend to invite. In the meantime, enjoy the hilariously silly conversation we had for episode 7 of the current season of 1Route RoundUp. It may not teach you that much about managing risk for comms providers, but Jeffrey is right to remind us that even the most serious professional should enjoy what they do.