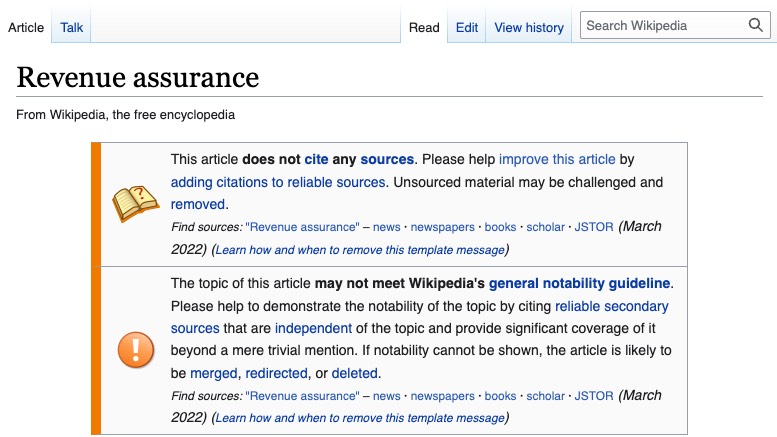 Beginning at the end, the Wikipedia page for revenue assurance was killed by a prolific Wikipedia editor whose username is Slywriter. The execution was entirely justified, and Slywriter is clearly qualified to put ailing pages out of their misery. Since 2011, Slywriter has performed 9,137 edits to 4,888 different Wikipedia pages, so there can be little doubt that Slywriter knows the rules and expectations for managing content on Wikipedia. On March 17, Slywriter performed two edits that collectively cut 98.7 percent of the content from the revenue assurance page, leaving it marked as a near-empty ‘stub’ which may be deleted unless the notability of revenue assurance is demonstrated “by citing reliable secondary sources that are independent of the topic and provide significant coverage of it beyond a mere trivial mention”. Nobody could complain this was an unexpected or sudden development; the page had continuously carried a warning about the lack of citations since May 2009. In other words, only a Lazarus-like miracle can bring this Wikipedia page back to life.

There was ample time for citations to be added. The version of the page that Slywriter killed in 2022 was almost three times as long as the version of the page which received the first warning about a lack of citations in 2009. People visited the page and some added text to it, but none provided adequate references for the content they added. And so this Wikipedia page represents the most important conundrum that was never solved by the revenue assurance community. There can be confidence that revenue assurance exists because people can point at each other and refer to the inclusion of the words ‘revenue assurance’ in their job titles and job descriptions. But when asked to show some other evidence that revenue assurance exists, they are unable to locate any documentation of a type suitable for an encyclopedia or any other arena where the standard of proof must be higher than just trusting what some people say.

The page was born on November 23, 2005. Unlike many supposed facts about the history of revenue assurance, that statement can be shown to be accurate because Wikipedia logs every change. What you cannot tell from the log is that the page was born inside the Bracknell office of Cable & Wireless. Anyone who knows Gordon Fordred can vouch he has a mind that fizzes with ideas, and we had just enjoyed an especially stimulating conversation during a break for coffee. Our conversation stretched from Cable & Wireless’ origin in the 1860’s with several telegraph companies merging to form the first global provider of instantaneous international communication, to the importance of using the rapidly expanding internet to create new opportunities for education in the present day. Gordon is a proud African and he shared my admiration for the way Wikipedia had rapidly supplanted book-bound encyclopedias to become a resource unlike any previously available to the majority of schoolchildren in Africa and other continents. Then I observed we were employed by Cable & Wireless to do revenue assurance but there was no page about revenue assurance on Wikipedia. So we walked back to Gordon’s desk and I watched as he created it. That first version reiterated the definition of revenue assurance I had helped to formulate during a TM Forum meeting held the previous year.

Revenue Assurance encompasses principles that are primarily used in the telecommunications service provider industry. These principles include, data quality and process improvement methods that improve profits, revenues and cash flows without influencing demand.

Gordon only wrote a couple of sentences because we both had work to do. But ironically, those sentences are pretty much the only content that survives in the present-day stub.

Revenue assurance (RA) telecommunication services, is the use of data quality and process improvement methods that improve profits, revenues and cash flows without influencing demand. This was defined by a TM Forum working group based on research documented in its Revenue Assurance Technical Overview.

Like many people in the mid-noughties, Gordon and I shared an optimism about the potential for the internet to make the world a better place. We were also optimistic about the potential of revenue assurance, which was a new discipline pursued by a few telcos but which seemingly offered a foundation for greatly improved decision-making across many aspects of businesses that handle large volumes of data. When Gordon created that page Google was only 7 years old and Facebook had yet to celebrate its second birthday. The vast amount of data possessed by telcos compared to most other businesses suggested they could play a leading role in establishing how to use data to prevent mistakes and improve results. Our idealism proved to be largely misplaced. Rather than contributing to the development of revenue assurance, most additions to the revenue assurance page on Wikipedia were inspired solely by greed, as a series of software firms spammed the article with blatant adverts for their products.

Adverts on the Wikipedia page were periodically culled but matters came to a head in 2009 after the Grand Poobah of Fictional Histories, Rob Mattison of the Global Revenue Assurance Professionals Association (GRAPA), completed a series of rewrites which would have effectively turned him into the sole author of a page which was one long advert for himself. He had invented a new timeline where he alone was responsible for revenue assurance becoming a recognizable business discipline. Feeling the need to intervene, I stepped in to revert Mattison’s changes and the resulting edit war was only concluded when Wikipedia editors rolled back all of Mattison’s changes and locked the page to prevent further tampering. As if to confirm there continue to be some sections of the revenue assurance profession that prefer to be ignorant, social media still sees individuals seeking praise by publicly announcing they have completed one of Mattison’s training course on ethics and other subjects. It should be shameful that individuals who expect to be trusted to provide assurance of sensitive and important data can be too lazy to perform even a basic check about the trustworthiness of people they turn to for information.

The edit lock on the revenue assurance page succeeded in discouraging vandalism after the lock expired. Mattison no longer created new aliases to edit the page and there was a fall in the rate at which new adverts were added. In 2012, an individual with the username Magik.das, whose real identity is unknown to me, spent time adding a lot of content which was uncontentious but lacked any sources. There have been many edits since, but the page as it looked following the last revision by Magik.das on January 9, 2013, is remarkably similar to the page as it looked when Slywriter killed it in March 2022. Some adverts had been inserted, then rolled back. There were some minor corrections to grammar and most of the external links were progressively removed because they no longer pointed to live webpages. But after the intense idiocy of the page’s early years, neither the get-rich-quick merchants nor many serious professionals showed interest in contributing to the page during its long period of dormancy. It was as if nobody had anything new to say about revenue assurance after 2013.

Thinking back to my conversation with Gordon, we were comparing the startling potential of the telegraph system created by Victorian Britain with the startling potential of the internet. A world with instant planetwide communications is very different to a world that lacks such communications. This hardly needs to be explained to readers of Commsrisk, a website that appeared almost crazily novel when I began writing in 2006, and which must now compete with livestreamed webinars, virtual conferences, podcasts, animated videos and social networks. In the meantime, Cable & Wireless’ global business has been reduced to a few remnants of the era when telegraph repeater stations needed to be built on islands surrounded by ocean. Some of today’s professionals act like LinkedIn is the ultimate repository of all truth in the business world; I started writing for Commsrisk when LinkedIn had fewer than eight million users globally. I expect I will still be writing for Commsrisk when a new generation of business professionals tire of the falsehoods found on LinkedIn and shove it into a giant digital bin along with all the other social networks that prioritize the grabbing of attention over the telling of truth. Having an enormous range of outlets does not guarantee increased quality of inputs. What Gordon and I failed to appreciate in 2005 is that an internet which is so effective at eliminating barriers to the spread of information will also eliminate desirable obstacles to the spread of misinformation.

We hoped that the internet could be harnessed for a program that would turn revenue assurance into the basis of a scientific approach to decision making and risk management. The internet instead became a harness worn by those of us who endeavored to prevent revenue assurance being taken over by charlatans. We may have stopped them from completely rewriting the truth of what revenue assurance is, what it has accomplished, and who deserves credit for the progress that has been made, but the effort expended on policing lies and fabrications drained resources that should have gone into creating reliable works of reference. We were too busy pulling down castles in the sky to spend time digging the foundations for a robust structure here on Earth. And that is why the lack of citations ultimately caused the death of revenue assurance on Wikipedia. Even if somebody had wanted to add a citation to the revenue assurance page, there have never been sufficient demonstrable and reproduceable successes that were documented well enough to cite.