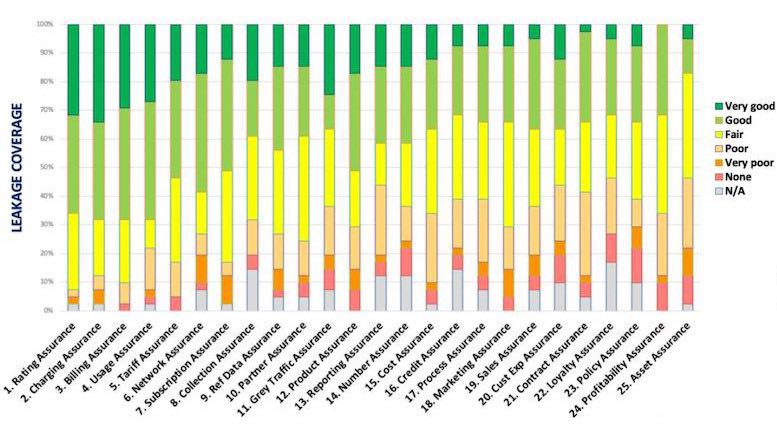 There are some changes between the map showing the contours of revenue and cost leakage per the new RAG Leakage Coverage Study (pictured above) and that published after the original benchmarking study, which was conducted in 2019. However, the improvements in coverage vary between mediocre and none. For some kinds of leakage the average coverage is worse than it was two years ago. Core activities like usage assurance and tariff assurance are now reported to be less comprehensive than they were before. Where coverage has improved it is usually because a greater proportion of comms providers report their controls are now ‘fair’ when previously they were ‘poor’, or that the controls are ‘good’ when previously they were ‘fair’. Even for the oldest and most established forms of assurance, such as billing assurance, there are still less than 30 percent of telcos reporting that their leakage detection and prevention controls are comprehensive enough to justify a ‘very good’ rating.

The changes in the benchmark results between 2021 and 2019 are summarized in the graphic below. Reference data assurance, sales assurance and asset assurance all saw improvements in coverage of between 8 and 9 percent, but each started from a relatively low base. As a consequence, only reference data assurance overtook other forms of assurance to be ranked above them. Asset assurance remains the lowest ranked assurance category, despite the potentially enormous savings that might be realized through data-driven optimization of network capital and operating costs. 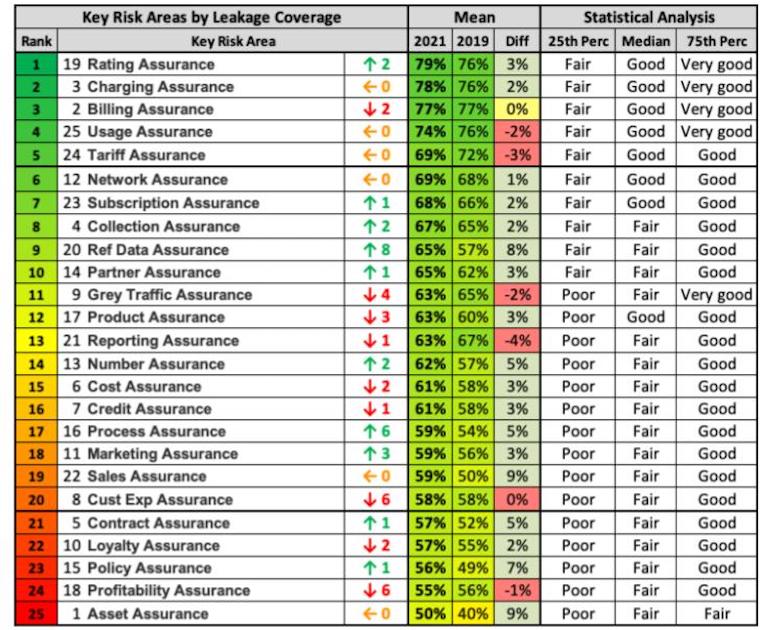 The complete public report of the leakage coverage benchmark study, which was sponsored by Symmetry Solutions and authored by their expert consultant Geoff Ibbett, can now be read or downloaded from the RAG website without any need to register. Participants in this year’s study will receive personalized reports that show how they compare to the rest of the industry.

The lack of progress in revenue and cost leakage coverage should be taken as a wake up call to revenue assurance and business assurance professionals, not least when explaining why coverage has not significantly expanded beyond an identifiable core of activities that even immature telcos would have known to address ten years ago. Some of the responses to a recent article explaining the basic concepts of leakage coverage indicated there are many telcos who simply do not understand how or why they should gauge the completeness of their leakage measures. This means there are assurance professionals who still have no real conception of whether they are addressing the most serious causes of leakage in their business, and are still reliant on gut instincts or incomplete definitions to determine what work they will do and which leakages will be allowed to continue unabated and unreported. Far from being ready to adopt advanced technologies or sign up to grandly-worded manifestos, the results of this benchmark study indicate that a troublingly large number of comms providers are no better at assuring their revenues and costs than they were two years ago.