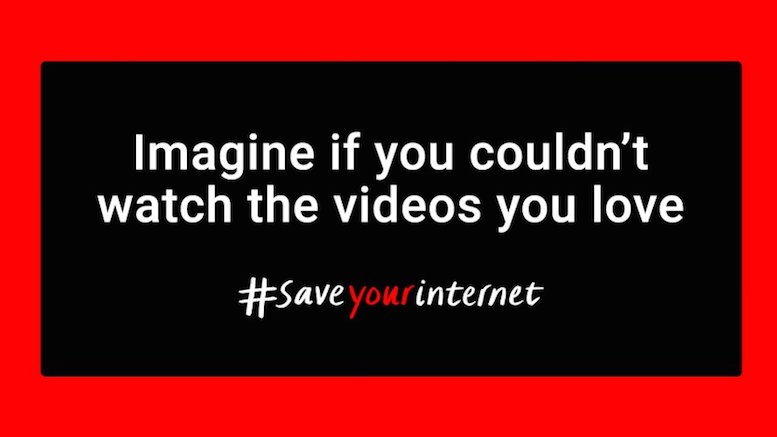 European users of YouTube have been seeing pop-up messages that invite them to learn more about Article 13 of the EU Copyright Directive, the rule that would impose filters on all user-generated content uploaded to major web platforms. A screen grab of the pop-up is shown below.

Such a low-key message may not attract the attention of a large proportion of fans of such edifying YouTubers as PewDiePie, KSI or Zoella, but it does signal that YouTube is willing to draw the public’s attention to an issue which the average MEP would prefer voters remained ignorant about. The European parliamentarians have many reasons to be ashamed of their behavior, but the worst is that they are trying to pass a law which will make upload filters mandatory, whilst avoiding any mention of upload filters in the law itself. Their rationale is clear: if the law refers to filters, then huge numbers will instantly be against it. So they have constructed a rule which would effectively force providers like YouTube to implement filters – because there is no other practical way to achieve the goal – without making the requirement explicit.

YouTube’s pop-up points users to their #SaveYourInternet campaign site, which provides a straightforward explanation of the consequences of the European Parliament’s new rule:

The proposed version of Article 13 would eliminate the existing notice-and-takedown system currently in place to protect rightsholders and platforms. This would make platforms such as YouTube, Facebook, Instagram, Soundcloud, Dailymotion, Reddit and Snapchat liable – at the moment of upload – for any copyright infringement in uploads from users, creators and artists.

The choice of words is carefully calibrated. Nothing in YouTube’s campaign says that they are opposed to upload filters per se. German MEP Julia Reda helpfully points out:

Many have mistaken [the #SaveYourInternet campaign] as lobbying against Article 13 as a whole – it is not… YouTube spelled out that they would be quite happy with a law that forces everyone else to build (or, presumably, license from them) what they already have in place: Upload filters like “Content ID”.

The final version of the EU Copyright Directive will be produced following a ‘trilogue’ – an engineering of a compromise between the differently-worded drafts put forward by the European Parliament, European Council and European Commission. (Apologies to those of you who neither understand nor care what each of these bodies does; please direct your questions and complaints to the millions of fans of EU institutions who also cannot explain the differences between the Parliament, Council and Commission.) Whilst YouTube is opposed to the version of Article 13 proposed by the European Parliament – the only part of the EU elected by the public – they would be happy with the version from the Council. Reda comments:

…the Council Presidency sides with YouTube, going back to rather explicitly prescribing upload filters. The Council proposes two alternative options on how to phrase that requirement, but they match in effect…

Heavy-handed censorship of YouTubers would guarantee that the EU loses popularity with young people. At the same time, the politicians who support the EU Copyright Directive appear more concerned with maintaining the favor of old business empires. It would suit them for businesses like YouTube to take the blame for every inevitable failure of the bots which are meant to detect which uploads have infringed copyright, and which have not. This explains why YouTube wants to rally public sympathy, whilst also hoping the EU government forces rivals to adopt the same gatekeeper technology that YouTube already has in place.